In early 2017 there was an increase in the number of refugees arriving in Brussels trying to reach the UK. In March 2017 Care4Calais started making weekly trips to Brussels to take food, clothes and bedding as, at that time, there was very little support available to them.  By the summer of 2017 there were around 600 people sleeping rough in Gare Du Nord and Maximillian Park.  Local associations then began to react and Care4Calais started working with an excellent group – Plateforme Citoyenne de Soutien aux Refugies Bruxelle.
In response to the numbers the Belgian government took the extreme measure of arresting refugees and deporting them back to Sudan*. This had the desired effect of reducing numbers. However, in reaction to this, Belgian citizens began a voluntary system to take the refugees into their homes to protect them, which still continues.**

There are now 200-300 refugees living in Brussels, and we distribute essential items roughly every fortnight in the city. On a day trip, we take not only physical donations, but also often provide a charging station for mobile phones, art materials and can end up playing sports (football and basketball being the most popular) in the park. 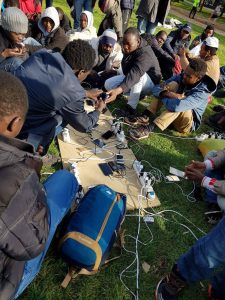