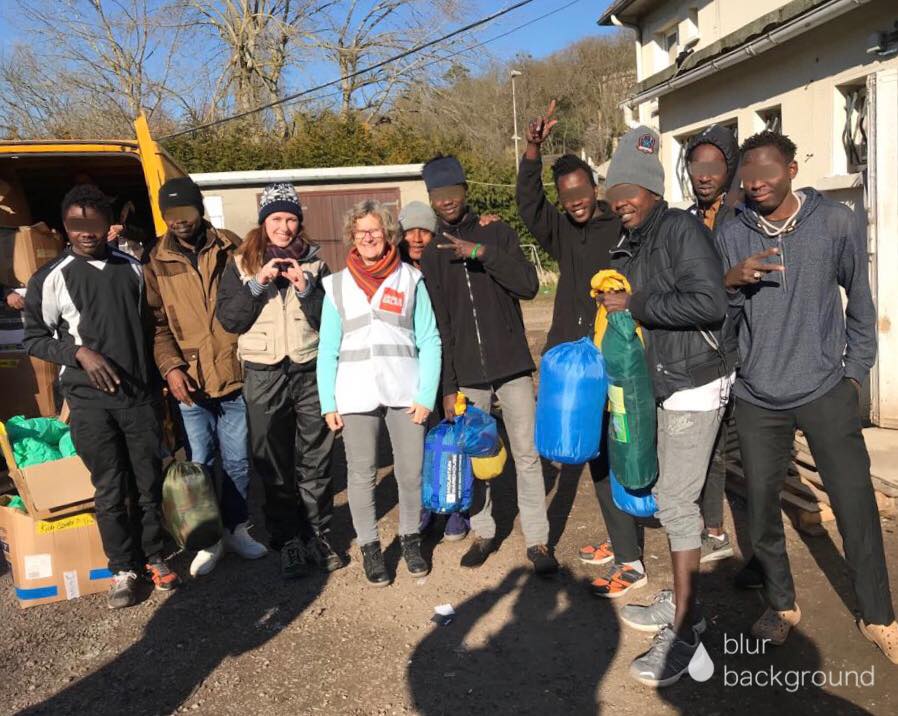 With temperatures in northern France plummeting to -10, and the next two days set to be the coldest yet, our volunteers have been out on the road to get urgent supplies to some of the less well supported groups along the coast of north France.

First we drove four hours down to Caen where our first distribution was to a squat in a dilapidated old house. Jumping out of the van into the freezing cold, we were greeted by welcoming faces. They helped us unload the food we brought, onions, flour, rice, tins of kidney beans, chick peas, cooking oil, and then helped us reload half of it without a murmur of complaint, as they had given us information about a second location and wanted to share the food. Distributing coats, sleeping bags, tents, thermal underwear and snug packs to a group of extremely grateful people was heart warming.

We moved on to the next place, a cavernous old warehouse, with graffiti covered walls on an industrial estate. All the food was gratefully received and we again gave out the cold weather supplies. Towards the end of the distribution I noticed a young lad who was in obvious pain, with dirty old bandage wrapped around his finger. Fortunately, we had two medics with us.

Adam, who is 16, cried with pain as they removed the dressing, I tried to comfort him, as he sat in a volunteer’s car trying to get some respite from the biting wind. Adam and another lad with a dreadfully inflamed hand and arm, required hospital treatment, the medics disappeared off to the hospital with them while we continued on to the last distribution of the day at Ouistreham Harbour.

In the freezing dark, with the wind howling around us, we distributed coats, sleeping bags, tents, thermals and snug packs (gloves, hats, scarves and socks) to another grateful group of refugees who live in the woods nearby. Every one of them thanked us, shook our hands, and some happily hugged us.

The next morning we went back out near to the woods, and we were glad that we had two big vans in our convoy as we found another group of 80 more people nearby. Finally we headed further up the coast to meet a smaller group before driving back to Calais.

Tonight we have been told to expect temperatures of -10 to -15 overnight. There is no water in the warehouse as all the pipes have frozen. When I go to bed tonight I am scared to think of all the people we have met and how they will survive the next few days.