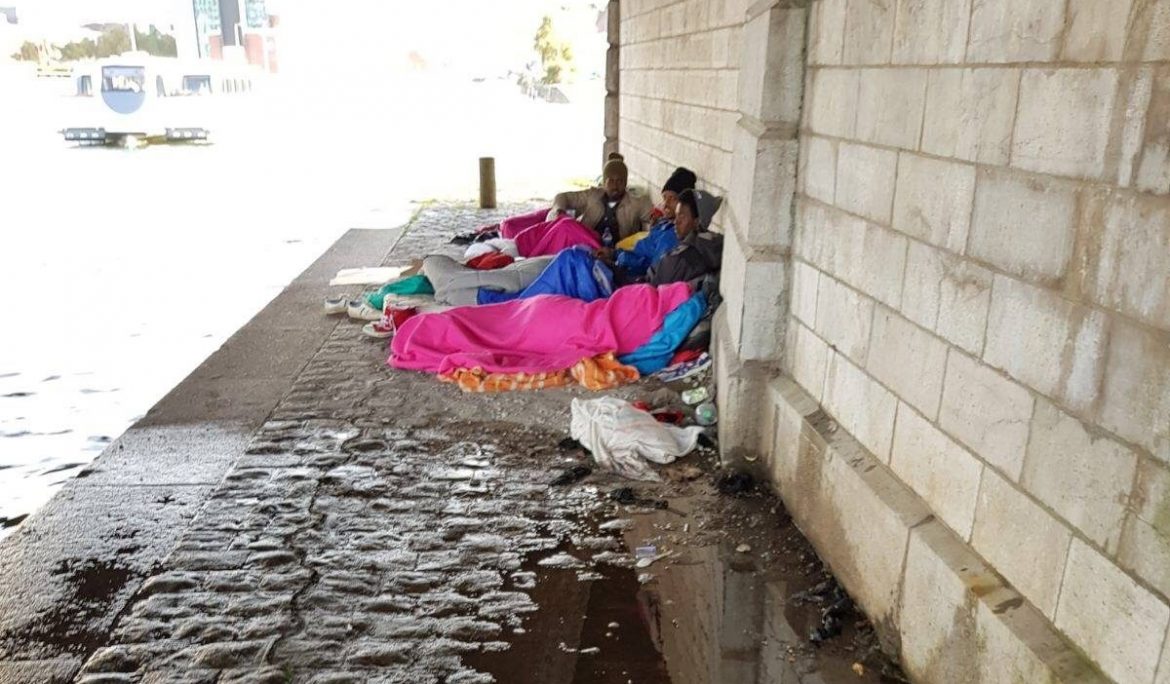 A chill wind blows through the Calais site; the sky is leaden and threatens rain. We leave the car and follow behind a seasoned volunteer; earlier he had found a small group of young lads who had lost their meagre bedding during a CRS raid the night before.

Negotiating the broken concrete, we slip through a broken wire fence and enter the wood. Small trails lead through the dirt. I become aware of more and more people passing us, their heads down, shoulders hunched against the cold, there is a palpable sense of despair. We stop one young man. “Do you need anything?” We offer a sleeping bag. “Thank you.”

So this is how it starts. A small boy, 10 years old, appears. I look into a face that has seen too much too young. I think, ‘… you should be at home annoying your parents with your playstation and demands for Christmas presents; but instead you are alone in this dreadful place asking me for a jacket.’ I give him mine – so what? I can always get another. It’s too big for him and probably later he will swop it for a better one … doesn’t matter he has learnt to survive.

A couple approach us, the man’s face bearing appalling scars from old beatings. His wife shivers uncontrollably. Off come my gloves; now at least she has warm hands. I take a big scarf and wrap it around her head and shoulders. I had feared that an act of giving might feel somehow condescending – the privileged benevolently giving tokens, but this is pure instinct and there is no justifiable reason not to show compassion. My first experience of Calais feels like walking on to the set of a post apocalyptic movie – except this is reality in Europe in 2017.

I have been working with an Association in South West France, we collect aid for refugee families seeking asylum there. That aid can be anything from providing furniture to finding legal and medical advice. We stand beside them through the long process until they are able to take charge of their own lives, an ambition we all share. We watch them integrate, see their children flourish at school making friends and learning the language. It would have been easier to remain at this end of the process, but I had a strong desire to witness and bear witness to the other reality – the lost ones.

I had heard about ‘Care4calais’ and the work Clare and her team were doing and had visited the web site. They appeared to be a cheerful pro-active group doing good things in a difficult situation. But now I know they are so much more than that. They are personally and collectively committed to helping; some have put their other lives on hold because they cannot turn their backs. Every day they are working to take vital aid to strangers of all ages and ethnicity. They look into faces worn down by exhaustion. They cope emotionally with having to say, “Sorry we haven’t anymore today – but we will come back.”

So if you are reading this and wondering if you should contribute – follow your instinct, send a donation, offer help, volunteer in any way you are able. I am a hard bitten old cynic actually so what surprised me most was that, of all the emotions this experience could have produced – compassion, sympathy, fear – all I felt was love, and it is a good feeling.

– written by a volunteer