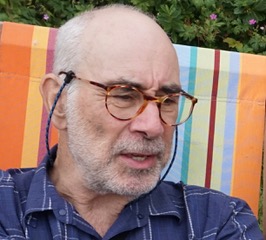 In February 2020, I did something that changed my life.

I’d volunteered with Care4Calais in Calais, and back in the UK I found myself supporting a Kurdish refugee who was having a rough time. The Home Office had said he was over 18 years old when this was not true, and there was no way for him to appeal. I knew this was wrong, so I helped him to find a lawyer and go through the tortuous process of claiming asylum. It took a year, but we got his claim heard – and at last he was granted asylum.

It gave me a good feeling to have accomplished something meaningful, and I was still feeling pleased about it when I saw an advert for volunteers for the Care4Calais legal access team on the website. I emailed them and signed up.

The legal team helps refugees get the right paperwork together, find solicitors and deal with the asylum system. We also provide emotional support. There was a two-week induction, and the team was fantastic, always providing someone to answer my questions, point me in the right direction or give me a phone number. I was never made to feel slow or stupid, and they were grateful I was there helping.

I’ve been with them about 14 months now, and never looked back.

I am retired so have the luxury of spending quite a bit of time on the job. I’ve probably seen over 200 refugees and have maybe 160 active cases. You have to be quite organised, as there can be a lot of paperwork involved, and you need to enjoy solving problems. Being determined is helpful too. You don’t need legal training – I have had none, I just know how to read and interpret long words and jargon so that refugees can understand it.

I do believe I make a difference and as a team we make a massive difference to the disadvantaged people who end up on our shores. It’s important to me that I do something. I don’t just disagree with the government’s policies, I do something about it. Something to change how Britain engages with the world and to welcome migrants rather than export war.

That idea of doing something has been important to me for a long time. I’ve been in education most of my life, as a teacher, and then working for the DFE. As a civil servant I was lucky to be able to retire early, but I still wanted to do something, something back in the classroom with real learners. So I started teaching English to refugees, and as I got to know my learners I discovered most of them were victims of war of violence. I’m passionately anti-war, so that resonated with me.

I’d started by helping with the Syrian refugees who came to Brighton on the Vulnerable Person Resettlement Scheme, but when both my daughters volunteered in Calais in 2016 I decided I could also do that. That was the beginning of the Care4Calais journey that has led me to where I am now.

I don’t really have a speciality with the Access Team, but I must admit there is a soft spot in my heart for the ones who have come over from the Calais camps. I’ve been to Calais numerous times and met the people living in the appalling camps there. An experience that never leaves you. I think I first went in 2017, and I went back many times before Covid hit. With the Access Team I feel like I’m continuing the process started in Calais; helping the same people I used to try to find a pair of shoes for.

There have been difficult times when people are rejected, made destitute and made to feel worthless and completely overwhelmed by an incomprehensible system. The people we help have had pretty horrible lives, seen dreadful things and have left everything dear to them behind, so to see how they are treated here infuriates me. So I do this work – it’s my commitment to how the world ought to be.

But then of course there are the highs, when people get asylum. Most don’t speak great English, so I have become an expert with Google Translate. Some days I’ll get a WhatsApp message with a photo and a question asking, “What is this letter?”

It’s fabulous when I can say: “You have been granted leave to remain.”

I have also helped in many other ways too; knowing who to call for food, support, language classes and housing has become part of my day! Care4Calais has grown exponentially in the last year all thanks to its massive volunteer base, and now the network spreads across the UK and continues to grow, and weaving together communities who want to help.

I’ll continue with the legal team for now as I know we’re really helping people, giving them access to a solicitor when they could easily just be lost in a system. I think in all we have 2000 people on our books.

But I’ll also get back to Calais when I can.