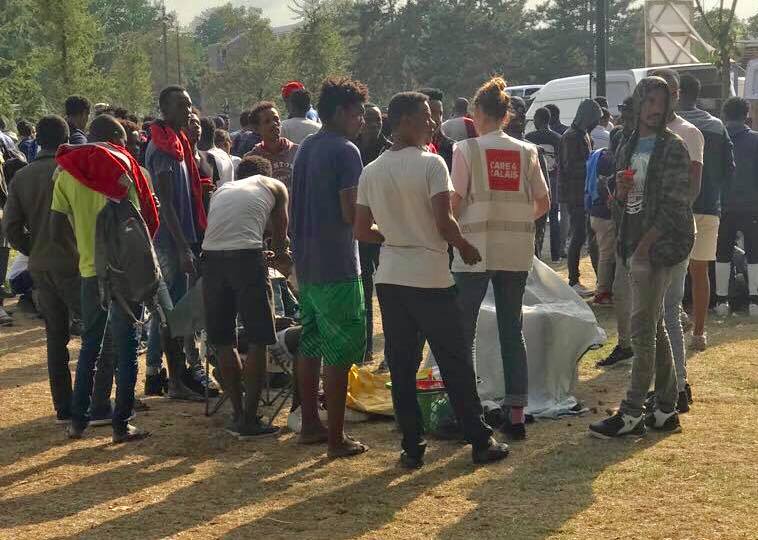 There are now between 6-700 refugees living in and around Park Maximilien in the centre of Brussels near to Gare du Nord. When we visited last Thursday the park was very crowded, an obvious increase in numbers, with groups of refugees standing, sitting, sleeping and chatting in every place you could see.

The mix of nationalities has increased in recent months too. There are now people from Sudan and South Sudan but also Eritrea, Ethiopia, West Africa, Iran and many from Afghanistan, and a few from Ukraine and Palestine too. There are also several women, mainly from Eritrea and Sudan who live precarious lives here.

As soon as the people caught sight of the Care4Calais vests they ran to form a line and even though we had brought around 300 coats, 300 sleeping bags as well as 300 packs of food, it soon became clear that we would not have enough to give something to everyone.

The line curled along the van and into the park and zigzagged up to the tennis courts. So many hopeful people. Now the weather is starting to turn cooler the coats and sleeping bags were very welcome, but scarily it was the food packs they really wanted.

In the evening food trucks come with around 700 hot meals but sometimes there isn’t enough for everyone, a major blow to someone who has been waiting all day for food. The local associations do a fantastic job, but as numbers are increasing the strain is starting to show.

As we made tea for people, a lady working locally brought us bags of food she had bought and asked us to help distribute it for her. She said she could see the park from her window and felt she had to do something. She said she would bring us tea and coffee next week as, like everything else, our supplies ran out. Other locals were also bringing food and supplies to the refugees as we distributed.

The government have recently reopened the hostels in the city that can take up to 300 people a night for a shower and a bed. The lines for this were already growing when we arrived at 4pm and the buses had still not arrived when we left at 8, but the lines were very, very long. At the other side of the park there were registration lines for vulnerable people and families. These people are able to stay with a local person for the night and this network is growing so fewer people have to sleep rough, but very many still do.

Next week we would like to be able to take more food packs for hungry people who deserve to be treated better than this. They stood for two hours in the hope of getting some biscuits, dried fruit and a cereal bar; we need to do more, together. Please donate now at https://goo.gl/jmkx7A