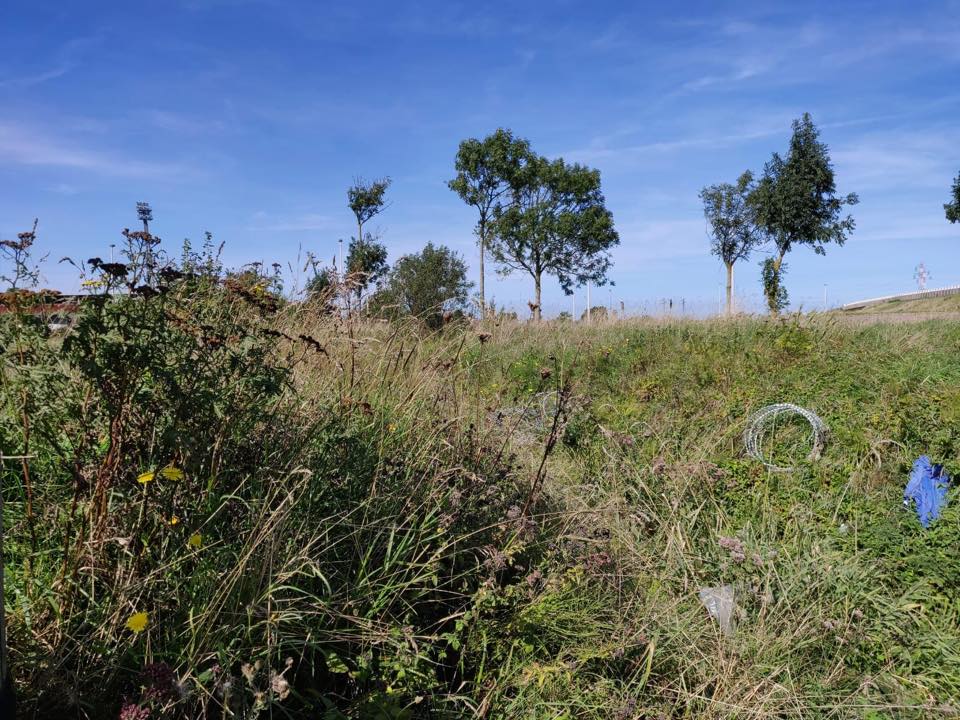 If you look closely, you can see the barbed wire, waiting to be put to use.

To the right of this picture, out of shot: the ‘little forest’, where, up til now, Eritrean refugees had set up their camp. To the left: a 4 metre high wall, which is due to be extended soon.

We walked to the forest but the tents had all gone and most of the people living there had seemingly disappeared. All we saw were police men walking round with pepper spray. If they see a tent, they open the door and spray it in.

When we began the distribution nearby, the Eritrean men came and found us. They told us that they no longer live in the forest. The police took their tents off them, night after night, so now they’re living under a bridge with just a sleeping bag for shelter.

Out of everything I saw over the weekend, the sight of the barbed wire is the image that I keep coming back to.

Of course I’ll carry with me the frustration of the man who told us that life is ‘not about riches, but about love’ and desperately wants to come to the UK in order to be safe, work and contribute to society. Instead he’s stuck in limbo, the not knowing what will happen to him slowly crushing his spirit. He can’t ‘go home’. There’s nothing left to go home to.

I’ll also carry with me the beauty of all the volunteers singing happy birthday to a boy who turned 16 on Saturday, living on his own in Calais, and seeing his delight at being given a present of a football kit and football from items that have been donated. It was the first time he’d ever celebrated his birthday and, although he was so far from his home and family, just for that moment he beamed. His gratitude was truly humbling.

But I’m angry about the barbed wire.

In January of this year, the British government announced it would pay £44.5m for ‘extra security measures in France, which will go towards fencing, CCTV and other detection technology’. Why, as a country, can we find money to build barriers to keep people out but not the money to provide the refuge that our brothers and sisters in Calais so desperately need? How much good could that £44.5 million do? How many refugees could be given the lifeline that they’re desperately waiting for?

Please take a look at www.care4calais.org and help in any way you can.