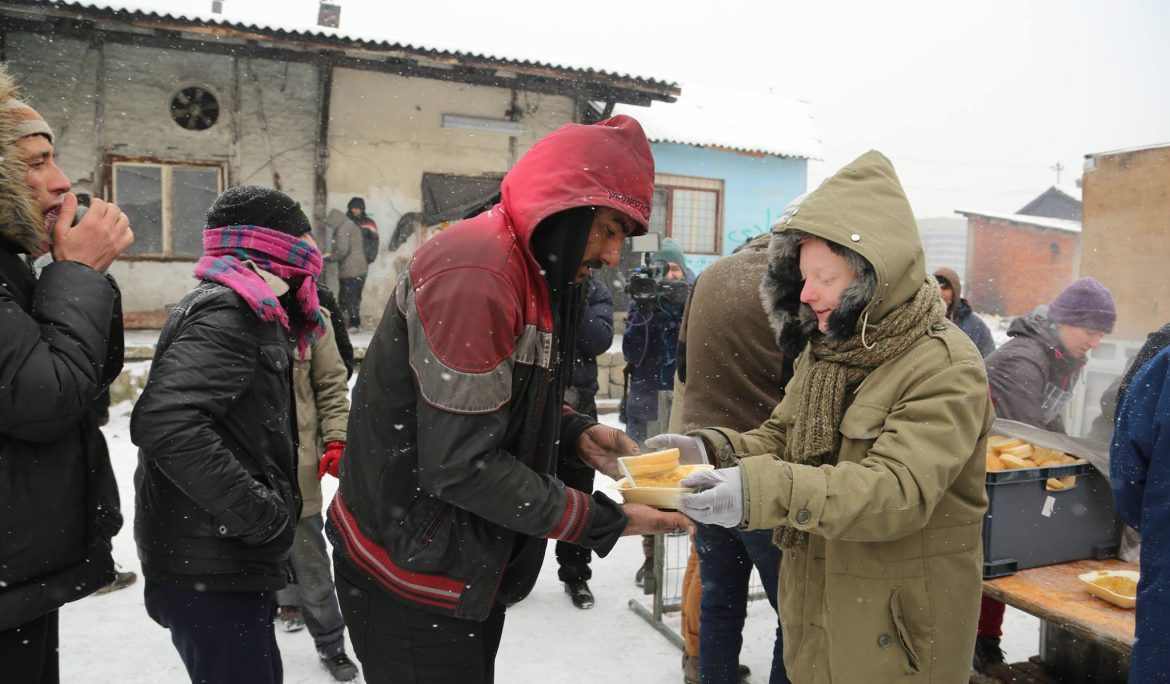 Every day we take food and aid to around 70 people who are sleeping rough in the Calais area. The majority of these are children, and many have run away from the French centres after hearing the news that they are not going to be taken to the UK. Given that these people are in hiding it is reasonable to assume that there are more that we have not yet found. In Calais, night time temperatures are dropping to minus four and we are extremely concerned for their wellbeing. Just three nights ago the police came upon group and blocked up the place they were sheltering so they could not access their belongings including sleeping bags and blankets.

With many people on the move, it is difficult to estimate the number of new arrivals on any day, but we generally see at at least 10 to 12 people, including minors, arriving in or travelling through Calais daily (last Sunday 117 were counted). The current police response focuses on detention and deportation – the effective criminalisation of being a refugee.

The state run children’s centre at St Omer have recently increased capacity from 45 to 75 places, but its still not enough. They reported that over 200 children passed through their doors in each of December and January. They also said that 90% of their arrivals are delivered by the police, and that a new procedure has been adopted on the arrest of a migrant whereby the police now undertake the preliminary age assessment, and it is based on this that the decision is made whether to take the migrant to a detention centre or to St Omer.

Last week a minor in Chambery contacted us and said he had tried to kill himself. Children in Lyon called us as they were told to leave their centre as they have been age assessed to be 18 years old. We have no idea how this was judged or where they are now.

We are aware of at least two small ‘camps’ in the region, and several smaller encampments that pop up and move on a sporadic basis. The living conditions are appalling and well below those of the original Calais ‘jungle’ with no running water, sanitation, cooking, heating or washing facilities. Those living in these camps are in daily fear of the authorities and indeed on 6 January 2017 police visited one of these small encampments and destroyed the tents, sleeping bags and possessions. A small French association that has been assisting the refugees there was subject to fines and ordered under threat of closure to implement expensive building alterations to accommodate disabled people, although there are no disabled visitors.

This is entirely unacceptable and it is clear that the refugee problem in Northern France has not been ‘solved’. The dispersal of the refugees took them out of the public eye. We must not let them be forgotten.

We desperately need volunteers at our Calais warehouse. We need people who can:

– Look for those who need our help who are sleeping under bridges and in ditches and in small, muddy camps in the cold.
– Help in the Dunkirk camp with building, cooking and the women and children’s centre.
– Go to Paris where the situation is desperate and refugees are freezing on the streets.
– Visit CAOs where the our friends from Calais are lonely, isolated and not getting the help they need.
– Visit those in detention who are scared and alone.
– Sort and organise our warehouse that makes everything else possible.
– Co-ordinate all the work that is needed now all across France.

Please email [email protected] if you can help, or go to www.care4calais.org for more information.