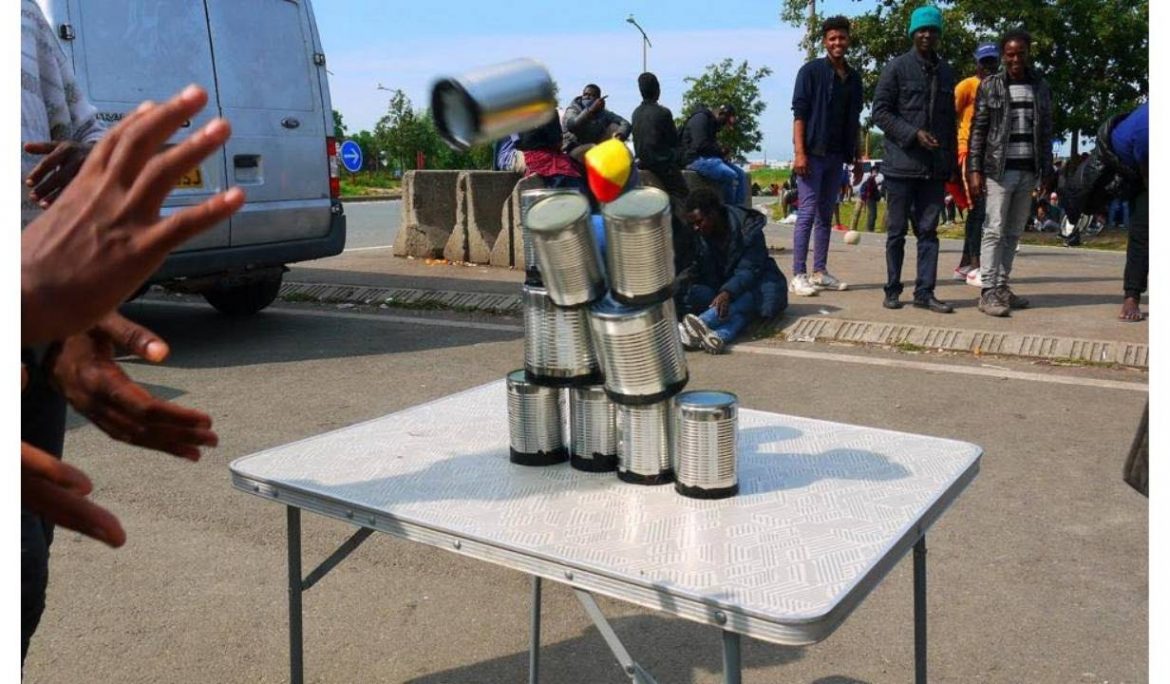 “What you doing?” “What are those for?”
A crowd of curious faces gathered around us after our distribution the other day, asking us questions and staring at what we were doing.
They could see we were organising something strange. Tin cans, sacks, hula hoops and mini basketballs all featured.
Would these weird activities involve the refugees too, they wanted to know?
In fact we were holding a mini Olympic games in Calais, in honour of the refugee team competing in Tokyo this year.
In the spirit of Care4Calais we had to improvise, and it worked brilliantly.
I was in charge of the coconut shy, which used tin cans as we didn’t have any coconuts. It soon pulled in a fascinated audience, and once I’d explained the idea, the crowd grew huge and everyone wanted a go.
Some of the volunteers wanted a turn too – when a volunteer took up a ball everyone clapped and cheered them on. The volunteers missed a lot of the cans by miles, but the young refugees had a pretty good eye, and knocked the cans down easily.
Everyone was having so much fun, and the laughter grew louder and louder – so much that a young mother crept from her tent with her child to see what the fuss was about.
We rarely see women at this site, so it was great to see her. She was very brave, and had a go on the coconut shy with everyone smiling and cheering her on. It was such a lovely, loving and fun atmosphere. I had a smile on my face all afternoon.
We also had a hula hoop competition, skipping, mini basketball and a sack race, which was particularly hilarious. The refugees took the challenges very seriously, and anyone would have thought there were real gold medals up for grabs.
Next time we’ll make some medals – I can’t imagine how competitive it’ll get then.
One of my friends on site pointed out how silly we were all being – and how important it was to be able to laugh and enjoy ourselves. Lots of people in Calais struggle with mental health due to the dire living conditions. Having some fun, even if it’s just for short time, means they can forget their troubles.
It was a long day but well worth it for the joy and fun we saw at the site.
Afterwards two guys told me how much fun it had been, and gave me some suggestions to make my game more interesting.
“Claire,” they said, “for you and for volunteers this is a hard game, but for us, very, very easy! Here’s what you need to do…”
This is one of the great things about Care4Calais. They encourage us to come up with new ideas, and to organise them ourselves. They know how important the social things are, and that it’s not just about handing out shoes and joggers. Refugees look forward to our visits – and now I’m really trying to come up with some new ideas for events.
-Claire, Care4Calais volunteer, Calais
Volunteers are the lifeblood of Care4Calais, and they get a lot from the work. But we need more people so we can continue supporting refugees. To join us in Calais email [email protected]