Crossing the Channel in Dinghies 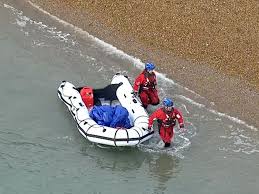 Crossing the Channel in Dinghies – what is the answer?

Since November 2018 around 220, mostly Iranian, refugees have been rescued after crossing the English Channel in small dinghies or fishing boats. This is an incredibly dangerous journey as the Channel is one of the busiest shipping routes in the world and these small vessels do not have the power to get out of the way of large vessels that could easily run them down without seeing them. In addition, weather conditions, heavy wind, rain and waves can be brutal at this time of year, and many of the migrants don’t even have life jackets.

– Why are people crossing the channel in dinghies?

They are undertaking these perilous journeys because they are desperate to claim asylum in the UK, but no safe or legal way exists for them to do this.

These are ordinary people who have done nothing wrong, other than to be born in a country which poses a huge danger to their lives. All they want is to be in a place where they can be safe, build a new life and contribute positively to society.

Contrary to what many people think, most refugees in Europe do not want to come to the UK, nor is that where the vast majority currently are. There are over one million refugees in Germany and over half a million in Italy, while France deals with 100,000 asylum claims per year.

However, those that do want to come to the UK usually have very strong reasons for it, the most common being family ties. Family ties run deep, especially when you have lost everything else. Just imagine if you’d lost your home, your family, and your only remaining relatives were in the UK – wouldn’t you do everything you could to get to them?

Other reasons include practicality, for example speaking English. Many of the young children want to go to school to learn in a language that they know; the adults want to provide for their families and want to put their skills to use in a country where they speak the language – imagine having to do your own job in France or Germany, not speaking a word of French or German.

– Why is this happening now?

There have been refugees in Calais for over 15 years and, until recently, most have attempted to get to the UK in lorries or cars. What has changed recently is that some have tried to cross the Channel in small boats.

This demonstrates that the effect of greater security measures in Calais has just been to force people to take even more desperate risks – it does not provide a long-term solution.

Similarly, closing the ‘Jungle’ camp did not stop people coming to Calais; it just made living conditions more squalid. This is an ongoing embarrassment to both France and the UK.

It is time for a different approach.

– Who are the people in Calais?

Refugees in Calais come from the most dangerous places in the world, including Eritrea, Afghanistan, Iraq and Sudan. Calais is often a reflection of the worst that is happening elsewhere in the world, because that is what creates refugees.

In recent months there has been an influx of Iranians, reflecting recent destabilisation in Iran. It is mainly these Iranian asylum seekers who have been crossing the Channel in small boats in recent weeks.

Since the Calais camp was closed in October 2016, the French authorities will not allow another ‘camp’ to form, so people are sleeping rough across Calais, Dunkirk and further along the French coastline. Living conditions are horrific, especially at this time of year when there is freezing rain, bitter winds off the sea, and temperatures drop below zero.

People have no shelter from the elements as the French police regularly confiscate tents and sleeping bags, as well as move people on at night so that they never feel safe. There is no sanitation, no regular food supply, and constant hostility and violence from the authorities.

The crisis is the terrifying level of risk that ordinary people are now being forced to take to access a right that many of them are legally entitled to – when they have done nothing wrong except be born in the wrong country.

The numbers alone are actually tiny – just four people per day are crossing by boat on average.

– Will rescuing people tempt more to take the risk, as suggested by immigration minister Caroline Noakes?

Caroline Noakes is referring to the theory of ‘pull factors’ that may draw people – but there is no academic evidence that such pull factors exist.

However, what we do know is that this year, when NGO rescue boats were prevented from operating in the Mediterranean, this did not deter people from crossing in boats. What it did result in was a higher death rate, which spiked to one-in-five, with eight people drowning per day.

This proves – in the most shocking way imaginable – that letting people drown is not a deterrent. We have a moral (and legal) obligation to save lives at sea as a priority. Anything else is unthinkable.

– Will sending them back to France stop them coming, as suggested by Charlie Elphicke?

Imagine being in Afghanistan, where everything is foreign to you – the language, the customs, the food. Then imagine having to consider staying there because you have lost your home, your family and your job. If you had a brother, or a cousin nearby who could help you navigate this foreign place, wouldn’t you do anything to get to them?

Refugees in Calais have often gone through hell to get to family in the UK. One more obstacle is just that – one more. These policies are not working. Its time for something new.

The only way to resolve this situation is to provide safe and legal routes for people who are so desperate to claim asylum in Britain that they will repeatedly risk their lives in order to do so.

It is entirely unreasonable that in this day and age people are forced to go to such lengths simply for their claim to be heard; taking dangerous risks like paying to be smuggled across one of the busiest shipping lanes in the world in small dinghies.

Existing policies are clearly not working. It is time to try something new.

– What if this means that more come?

It is important to view this situation in context: we are talking about a few hundred people seeking to get to the UK. The issue here is not one of, as some have put it, the UK’s shores being invaded; it’s one of safety for the very small number of desperate people risking their lives, just to seek to claim their legal right to protection.

The refugee crisis is a big issue, with no easy or magic answer. And that can scare people. However just because something is big or complicated, does not mean we give up on or ignore it. The UK is a great nation, and we have the ability to help people in their time of need.

We need to start asking ‘What we can do?’ ‘How many people can we help?’ Because every family that finds safety in Britain will no longer be in fear for their lives – and that is something we will always be proud of.