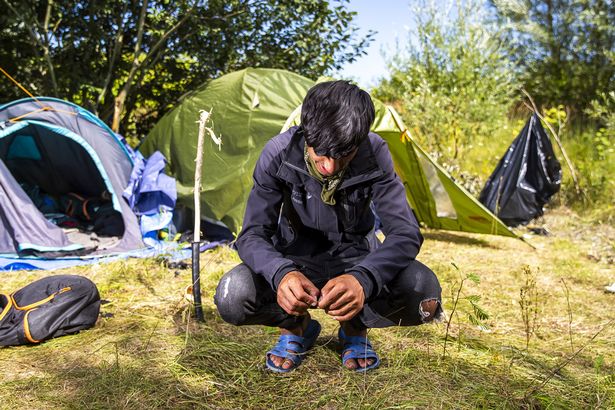 The Daily Mirror recently spoke to long-time Care4Calais supporter Lord Dubs and a few of the refugees currently trapped in Calais to find out more about the situation on the ground.

You can read the article in full by clicking here, but here are some excerpts from their conversations with teenagers Ahmed, Helo, and Mohammed.

He was playing cricket when the horror happened. The extremists carried out the massacre because his dad, a government official, had refused to join them.

Ahmed used people traffickers to smuggle him across two continents in a bid to reach his only relative – an uncle in London. Now 16, his eyes fill with tears as he gazes at the white cliffs of Dover on the horizon.

His case has been stuck in the system for nine months and is unlikely to be resolved before the end of the year.

He said: “I want to get to England so I can have a warm bed, play cricket and go to school.

“My friends tell me to try to go to Britain illegally. It’s hard because here I can see the UK but I can’t get there.”

Their dad disappeared in suspicious circumstances when he was a child.

At 13, he had to work as a mechanic to support his family – until his boss was accused of disagreeing with the government and shot dead by the army in front of horrified Helo.

The teenager, then just 15, was warned his life was in danger too. Helo piled on to a Land Cruiser with 31 other refugees to escape to Europe.

He said: “I was very scared but I love my brother. I will feel so happy if I can be with him again. I’ll have a family again. I won’t be alone.”

Brave Mohammed fled war-ravaged Sudan when he was 13 and set out to cross two continents.

He had been separated from his parents in a lawless camp and wanted to join his older brother in Manchester.

with 60 others to cross the Mediterranean. Then he hid in the backs of trucks and in train toilets to get to Calais.

Now 16, he doubts he will ever see his parents again.

But he said: “I’m praying to God to be reunited with my brother in England.

“If I can’t get in legally, I’ll have to try illegally.”