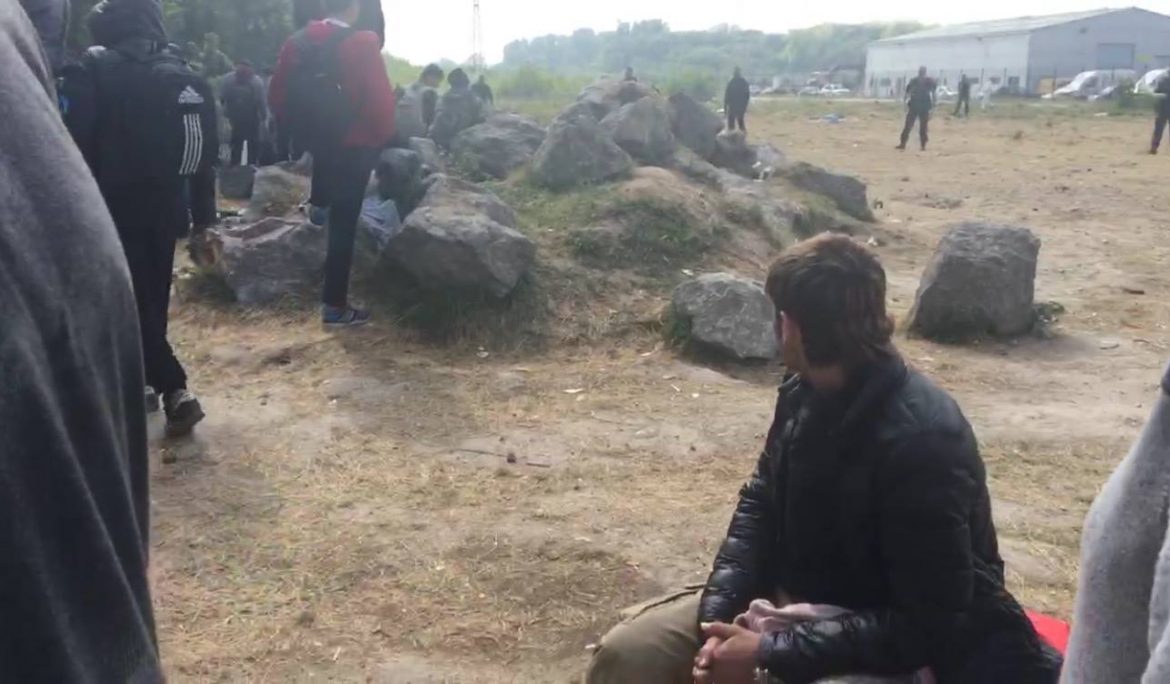 Our van parked up at the wayside of a small field at the side of a car park; complete with 3 volunteers, 80 litres of water, a box full of shower gel, moisturiser and toothbrushes and 14 buckets. We jumped out and ran round the back to begin preparing buckets in time for the queue that had begun assembling before we had actually parked. Our mission for the afternoon: to provide 150 human beings who were sleeping rough in the Calais countryside with a decent wash. Some of these people wouldn’t have had access to a proper shower in months.

The buckets and toiletries were given out and shared amongst the group and they washed as best they could in the middle of a field with a bucket. After we’d collected the washing supplies back into the van, the three of us dispersed into the group chatting to the refugees we already knew and meeting new ones. I had been sitting with a group for about an hour and it was around 3pm when the CRS (French riot police) started arriving. Two ‘CRS’ vans arrived first and 8 men, with a very militant like presence, got out swiftly and began marching down the road, alongside of the field. It was obvious the refugees were becoming uncomfortable and more and more CRS vans started to arrive, a convoy of at least 6 more vans.

The CRS formed a line from the back of the field. Around 15 men began marching from the back of the field towards the refugees (and volunteers) who at this point were sitting peacefully in the field. Batons held out and pepper spray attached to their belt, the CRS began running at us. The refugees frantically picked up all of their belongings, shouting to us to run. It was very clear to see the fear instilled in the refugees, by the CRS. We ran and were pushed into a small corner of the field whilst the CRS formed a line in front, containing us. Amongst the group of CRS, one of them had a very protrusive gun aimed at the refugees and ourselves.

For the next 10 minutes it felt like some kind of stand-off with us and the refugees standing/sitting in a corner and the CRS standing in front, marking off the area. I was slightly confused as to what was going on until people in white plastic suits emerged from the vans. They made their way onto the field behind the CRS and began to gather up sleeping bags and any other belongings that the refugees had not had time to pick up when running from the CRS, shoving them into the giant plastic bags they had with them.

The refugees at the front of the crowd were asking to please have their belongings back and were blankly ignored. Knowing that these things were the only items that these people had to keep warm that night was heart breaking. We watched on as the CRS picked up sleeping bags and whole rucksacks.

There was one jacket that was in the space between the CRS and the refugees and I joined the owner in pleading with the CRS for its return. They deliberated between them and it wasn’t looking good. Then, miraculously, one of the CRS threw over the jacket and we thanked him profusely. At that moment, it struck me, how ludicrous it was to be thanking a policing organisation for the return of man’s coat. A man that would be spending the night freezing, in fear, and isolated, with only the items that he can carry in his rucksack, to his name.

The whole ‘clear up’ was very quick, with no time to pick up small bits of actual litter. Once the sleeping bags and other items belonging to the refugees had been taken, the CRS moved off with the obtrusive gun aimed at us until the very last second when the last van slammed its door and sped off.