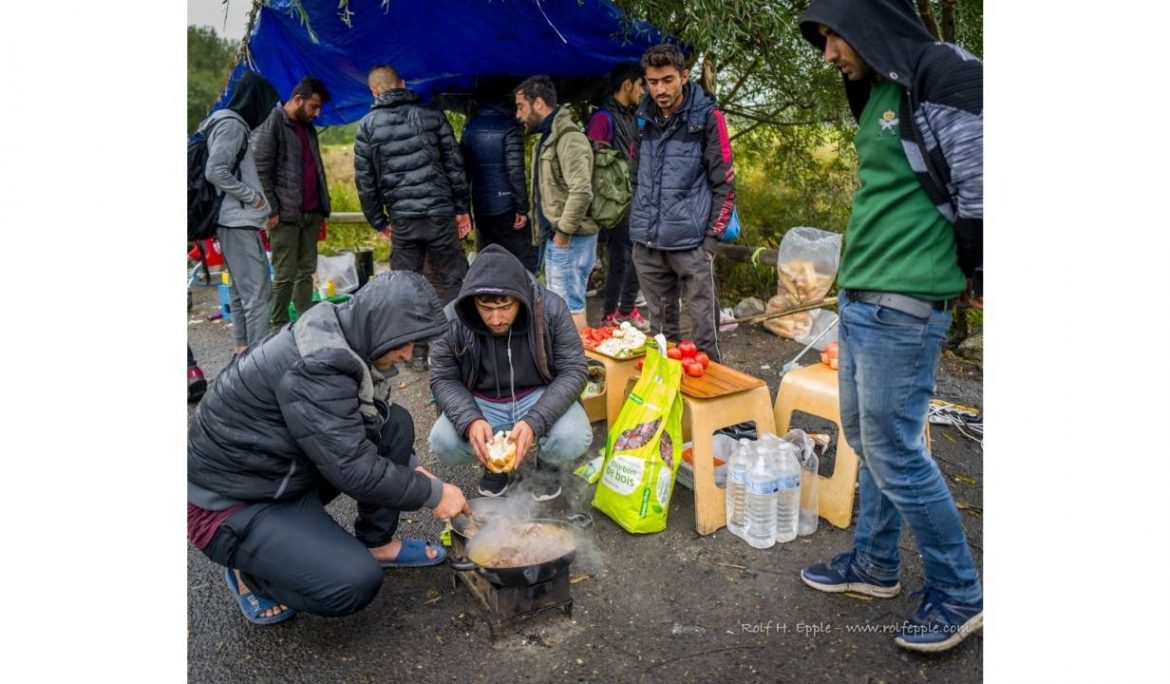 With autumn here and the police carrying out large-scale evictions where they take refugees’ possessions and food, there’s a huge call for food packs here in Calais right now.

But today we helped a lot of hungry people. We did our weekly food distribution at one of the biggest refugee sites in Calais, a stretch of scrubland that’s home to about 500 men, women and children

In total today we gave out 71 food packs. At Care4Calais, we try hard to make sure the food we give to people is culturally appropriate. La Vie Active, the state-sponsored charity, does provide food, but it’s often just a baguette and cheese, or other things that are alien and unsuitable.

Giving people the right food makes a big difference because people really do like to cook for themselves or sit together and share food they have – I think that is the same wherever and whoever you are, refugees are no different. So food packs are valuable items, and distribution has to be planned carefully.

The bags are put together in the warehouse with enough food in them for four people for a few days. They contain things that you can eat cold or uncooked or things that do not take long to cook- like various kinds of beans and tomatoes.

Fuel is scarce, so things that take a long time to cook cannot be used. We put in salt, spice and garlic to make the food as tasty as we can – cumin, chilli and ginger are very popular spices here.

We pack the van the night before distribution, as we need to be on site by 10:30 am.

Today when we arrived some of the refugees were already standing on the chalk lines that we sprayed on the ground the other day. The lines run four across and one metre apart when we do food.

The refugees need to find four friends they can line up with to get a food pack. This can be a bit stressful at first because if you’re new you may not have any friends or anyone to share with, so you have to wait until others show up you can share with. The volunteers do a great job of trying to explain what is happening, though, and once organized it is usually a very quick distribution.

Regardless of how hungry they were, most of the people we gave the food to had to wait to start cooking. Because the authorities have cut back most of the trees there’s also very little cover, so it’s really hard to hide the cooking fires from the police.

For that reason, most people cook late at night when the darkness hides the smoke. Afterwards, many will leave for the nightly trek to try to find a lorry and a way into the UK.

Today I felt sad as we watched the people walk back into the scrubland to hide their belongings from the police, and to keep the food safe for later. How can people be made to live like this, existing as fugitives, hunted, persecuted and stripped of their belongings? It is so monstrously unfair.

But giving out food packs does at least restore a little bit of agency and humanity. With the colder weather approaching, it’s more important than ever that we keep it up.