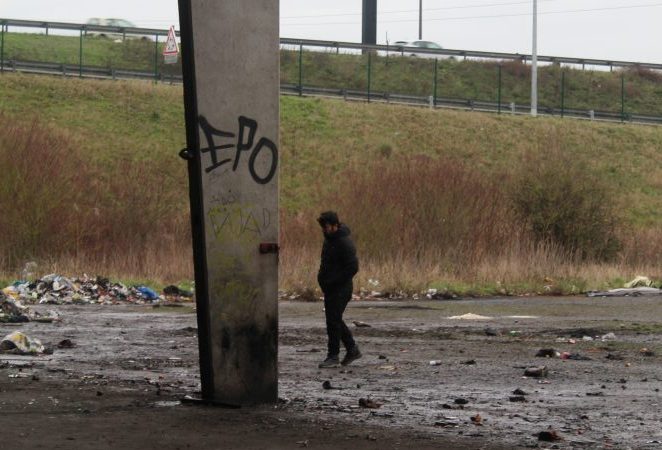 Yesterday morning around 8am police started clearing an area around a group of abandoned warehouses near to where we distribute at Dunkirk. Around 400-500 people have been sleeping rough there in recent weeks.

Police arrived in full riot gear and forced people to leave the site on foot and often without time to collect their belongings. A bus collected families and children and evicted them from the site. The police then destroyed all tents and belongings left in the area.

In the afternoon we arrived at the nearby lake where many people had gone to provide phone charging and tea and coffee. There was a storm blowing, with 20 mph winds and rain blustering people. As we drove in, we saw 50 people sheltering under a bridge under the motorway: the only place left for them to escape the rain. A few people had managed to keep their rucksacks but many we spoke to had nothing except the clothes they were wearing and the items in their pockets. There was an air of dejection and uncertainty as people milled around, drinking tea and thinking about what to do next. Many people told us that they are used to this – they will just wait until the police leave and return to the warehouses.

After hearing what had happened some of our volunteers decided to go back to the warehouse and get supplies to help. We returned at around 630pm and sure enough roughly 300 people were back at this site.

Night had fallen and the weather had worsened, people had nothing. A few had tried to start fires to keep warm and many were taking what little shelter they could under the corrugated iron roofs. The storm continued as we distributed 120 tents and 80 blankets to people.

The people lined up in the rain to receive the donations, nearly all of them thanking us for coming out tonight. Unfortunately we didn’t have enough for every one and we finished the distribution with about 100 people still in the line. No one admonished us, but many people asked us what they could do without anything in such bad weather. One man held up a scarf and said, “this is all I have tonight to keep warm, what can I do?” We told him we were sorry and that we didn’t have anything left. He said, “it’s ok, you have done what you can. Thank you.”

The single best thing you can do in 2020 to support refugees, is to set up a recurring donation.  Recurring donations allow us to respond immediately to crisis and emergencies without the need to fundraise first.

Whatever you can afford, the smallest amount makes such a difference to what we can do. Donate today!