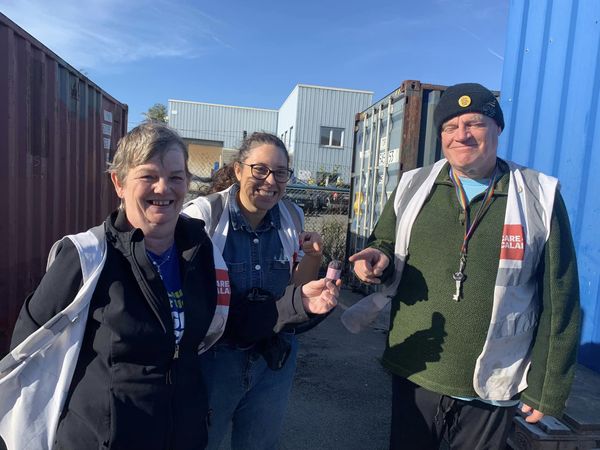 This afternoon in Calais, I was helping with the English lessons when an Afghan man came and sat beside me, and asked about our teaching. He was a gentle, intelligent man, obviously interested in how we worked, and we soon got talking.

It turned out that back in Afghanistan he had been a teacher of English himself. His dad was a local policeman, though, and when the Taliban took power, this guy had had to flee the country, becoming a refugee. As we chatted away, sitting there on a picnic mat on a piece a wasteland, I realised that although I was supposed to be teaching him English, I was learning far more from him than he ever would with me.

At the end of our conversation, he asked me a simple question: “What can I do?” It is just heartbreaking to hear people like this man sounding so uncertain about their futures, especially when the UK government’s attitudes to refugees is currently so toxic.

Later I met an older guy from Iraq, who had decided to do something about the political situation. He lived in the UK, but had ended up working in Ukraine, and after having to leave that country was now stuck in Calais.  He was utterly brilliant:  he made each volunteer in turn Prime Minister, and then asked each one of us what we would do immigration, climate change and other issues.

Someone really should get him into the Houses of Parliament.

Also on this trip to volunteer in Calais, I finally learned to make friendship bracelets. Everyone cheered when I got it right at last! One day after that, I found myself making bracelets for 2 tiny little Kurdish wrists. I have no words to describe how I feel about the refugee children – to think of what they have been through, and what still might be to come leaves me speechless, and as I made those bracelets I had to stop myself crying because I know what the last bit of their long journey could entail; like so many encounters in Calais, there was some smiling & occasional laughter, but also a story that my & made me &