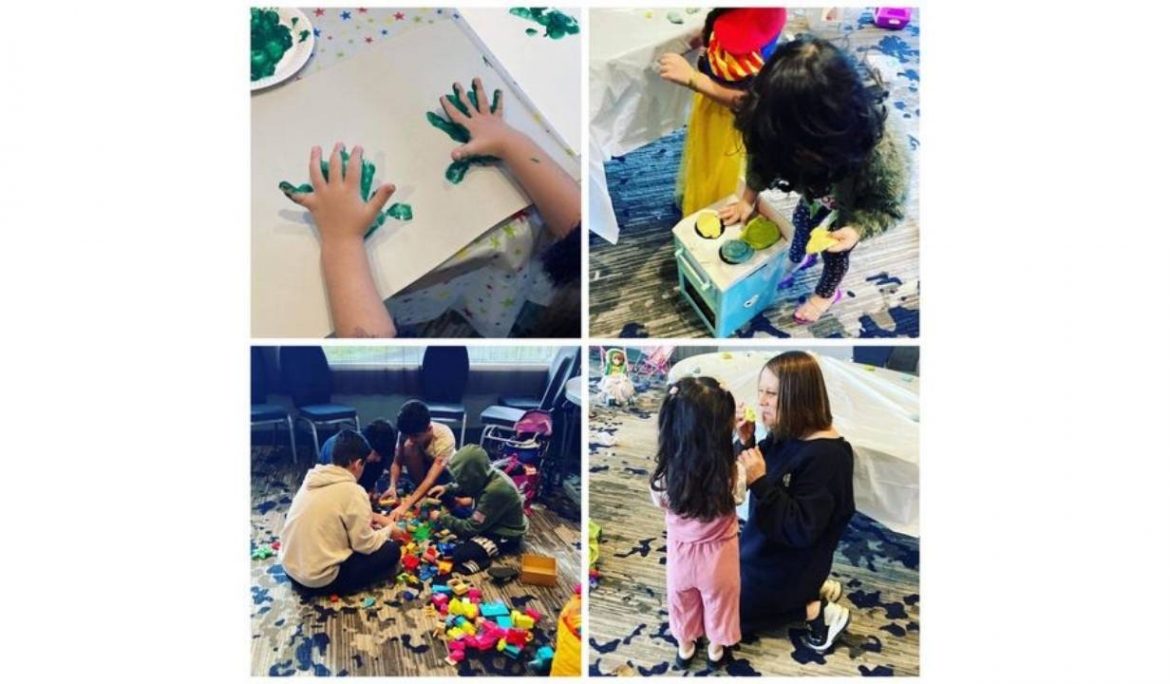 Today I heard laughter that was balm to my soul.
I was at the Kid’s Club that I run for refugee children at a hotel in Heathrow, watching two little five-year-olds playing house in a tent I’d set up with a pretend kitchen, cooker, pans, dolls and buggies. They were in a world of their own, cooking and feeding the babies and making a house in the tent. They were playing mums and dads just like I used to when I was little, having a wonderful time.
Like all the kids there, they’d been desperate for some toys and a safe space to play in before I started the club. To see them all enjoying themselves, and playing like any five year olds should be able to, meant the world to me.
My name is Katie, and I’ve been at Care4Calais in the UK for quite a while now. I volunteered at the old Dunkirk camp, but when covid hit I was forced to stay in the UK, and I volunteered in the Heathrow area instead.
At the start of the year I had the idea of setting up a kids’ club. At Heathow there are a lot of hotels for asylum seekers, and they feel a bit isolated, so the kids have little to do to keep themselves amused and stimulated.
One hotel has about 80 kids living there, so I made that my focus. The hotel manager is lovely, and when I approached her about my idea she jumped at it and gave us a brilliant room at the back of the hotel one morning a week. It’s usually a conference room. She said she’d wanted something for the kids to do activity-wise. Some of the kids hadn’t got school places yet and needed some stimulation and play time.
The first session was set for February. I needed toys and materials so I trawled FaceBook groups and charity shops until I felt prepared. We let the parents know what we’d be doing and invited them to bring their children along.
As soon as we opened the doors the kids loved it, and the fun never stopped. At the end the mums wanted toys to take away, so the next week we set up a table with toys the children could take back to the rooms with them. This was a bit chaotic as everyone wanted some.
Each week we’ve had different themes – dressing-up week, Play-Do week, Lego week and so on. The kids love it. I’ve got a toy parachute now, so soon we’ll do some games with it that require cooperation and sharing, teaching the children skills for the future.
A mix of kids come. Some run around with confidence, but some are shy and just sit and watch. I sit with those ones and teach them to play and interact, until they have the confidence to do it on their own.
We also have a couple of children with autism that we have encouraged to come along. We have a bubble machine that they absolutely love. We accept anyone really and make adjustments to the session so they can join in.
I love seeing the children happy and watching them play. I like being able to help people. I feel I’ve had a privileged life, a good childhood, enough food to eat and a roof over my head. I’ve been able to access education and the workforce. These are things we all should have, but I feel refugees have been stripped of them. I like to think our Kids Club might just make things that little bit better for them.
To volunteer or donate go to Care4Calais.org