From St. Albans to Calais 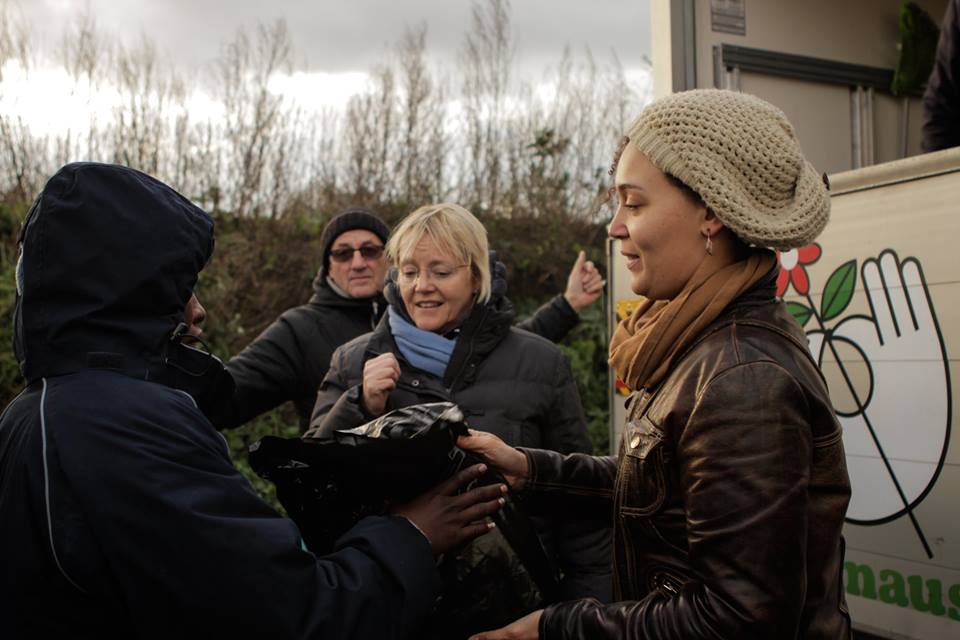 Since the terrorist attack in Paris on the 13th November, aid to the Calais camp has slowed down. It couldn’t have come at a worse time, as temperatures plummet and people huddle in their tents to escape the brutal cold. In an effort to keep warm people light fires and flames flicker dangerously in the night. It was one such flame which, in the early morning of November 22nd, ignited a flap of canvas and went on to devour 50 tents, with three people taken to hospital for treatment, one of them a pregnant woman

It was my second visit to the camp, and it was a far remove from the dry sunny day back on 27th September when we handed out Reese’s chocolate and distributed for hours, laughing and joking in the dusty heat. This time I arrived much as a migrant refugee might arrive, in darkness, swaying around in the back of a white van, squashed in with ten other people and holding on tightly as the road twisted and turned. We’d been briefed to expect the worse, with morale at its lowest and desperation in the air. The fire had ravaged the area around the Eritrean church, which had once featured on prime time news slots back when journalists still visited the camp. The earth was scorched and destroyed. A few people gathered in the middle of the wasteland while the ground smoked away beneath their feet. Following the fire, the two soup kitchens serving the camp had been broken into and there was now no food for anyone.

The van finally stopped and we all jumped out, relieved to be freed at last into the daylight. We had come to our first distribution point, an amazing dome structure, rising up from the earth like a mushroom and silhouetted against the wintery sky. I found out it was the Good Chance Theatre, run by two young British playwrights who had wanted to create a safe place for the camp people to come together and share their stories. As the fire had now, ironically, made homeless people homeless, the dome, with its large floor space and well-made walls, had become a place of refuge for the Afghan, Eritrean and Ethiopians who had been burned out of their living quarters. We lined ourselves up and passed sleeping bags from the back of the lorry into the dome. To me, to you, to me, to you. We had only passed along half of the bags before one of the playwrights came running up the line, “That’s enough, thank you!”

“Back in the van, back in the van,” but I ducked away. I had no desire to climb back into that dark space and sway around, unsure of where I was and where I was going. Instead I navigated the swampy ditches that had replaced the once well-trodden camp streets, and watched helplessly as the wheels of the Emmaus vans spun frantically in the mud. Brave people pushed against the cargo doors at the back, and somehow the tyres found dry soil to grip against and accelerated out of the swamps. I followed the vans up to our second distribution point, next to the church, where a pond had formed in the road and Portaloos remained only just above the water line. We took up our positions again and this time passed tents out of one of the Emmaus vans and up to a small distribution hut which a long queue of jostling migrant refugees were waiting to enter. As I passed flimsy tent after flimsy tent up the line I wondered at the futility of our actions. Someone had distributed tents. People had used them until they had burned down. And now again, we were distributing tents. It was a vicious cycle of pointlessness. “That’s enough, thank you!” A smiling man – maybe he was a migrant refugee, maybe he was a volunteer – waved both arms at us from the doorway of the rickety distribution hut, “No more space! Thank you!”

We walked this time to our next distribution spot, a little further down from the church, where there was more space and fewer murky puddles to fall into. The time had come for our trickiest distribution item. Shoes. We gathered at the back of one of the Emmaus vans, linked hands and stood in a… “Line, line, line, line!” came the cry, which I am now so familiar with. People appeared out of nowhere, appeared at a run, appeared on their bikes and stood one behind the other behind the other. And, like a long slow dance, the distribution began.

Learning from our previous trip the Emmaus crew had done some clever advanced packing. Every pair of shoes had been bagged and boxed according to size – 41, 42, 43, 44, and so on – and the shoes themselves were either black or grey. Limiting choice in this way saved us time and energy as everyone got the same, and it kept the queue moving. And the atmosphere lightened. People smiled and laughed, bartered a bit for socks, and a couple of children mischievously ducked and dived their way beneath our human chain. At the back of the queue, our friend Hameed had a tougher time. Down there things get a bit fraught. In the camp, queues appear and disappear at any given moment. And if you’re at the back of a queue, there’s more of a chance that it will disappear before you’ve received any kind of handout. Maybe you don’t even know what you’re queuing for, because you don’t speak any English or you’re blind or you’re deaf or you’re so hungry and cold you can’t really think properly. All you can do is wait and shuffle, wait and shuffle, and maybe, if you’re lucky, if your god is on your side, you’ll get a pair of cheap thin shoes which were probably made in China. But they’ll be a hundred times better than the five pairs of plastic bags you’ve wrapped around your feet. And so you wait and shuffle, wait and shuffle, wait and shuffle.