A fun afternoon in the French children’s centre 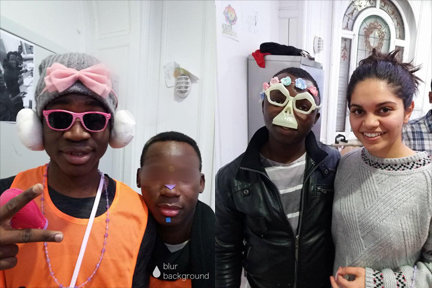 We had a fun and relaxed afternoon at the French children’s centre – laughing our way past language issues with a fair amount of charades thrown in; but leaving was really tough. Many of the boys are waiting for a decision on their legal status – some, to hear whether they will be accepted into the UK to live under the Dubs amendment. Others, whether France will accept their asylum application.

Having spent much of their young lives in dangerous situations, and gone through so many traumatic experiences to reach France, I think we all left just wishing we could give them a chance at the future that they so passionately want, and deserve.

The place hosts around 50 young refugees from all over the globe – ranging from Guinea, Mali and the Ivory Coast to Afghanistan and Iran. Despite the varied appearances, heights, languages and backgrounds these boys come from, there is a great a sense of fun and community.

They were heartbreakingly thrilled to have visitors to interact with – several rounds of the memory game, pick up sticks, snakes and ladders and dominos later, a number of the volunteers set up a line of plaiting friendship bracelets which was a big hit – the colours of their home country’s flag was a popular choice, as was the British red, white and blue.

We took new shoes, underwear, sweatshirts and jeans, all of which are in short supply there so were gratefully received. In particular we struggled to find enough pairs of small trousers and underwear. The boys all have tiny waists and are super thin so anything wider than skinny jeans just swims on them, but we typically get more donations of bigger jeans from the UK.

We can fully clothe a refugee for just £13 – and choose the best sizes to fit them too. To help us, please donate £13 at www.care4calais.org/donate. Thank you.