Fun and games in Calais 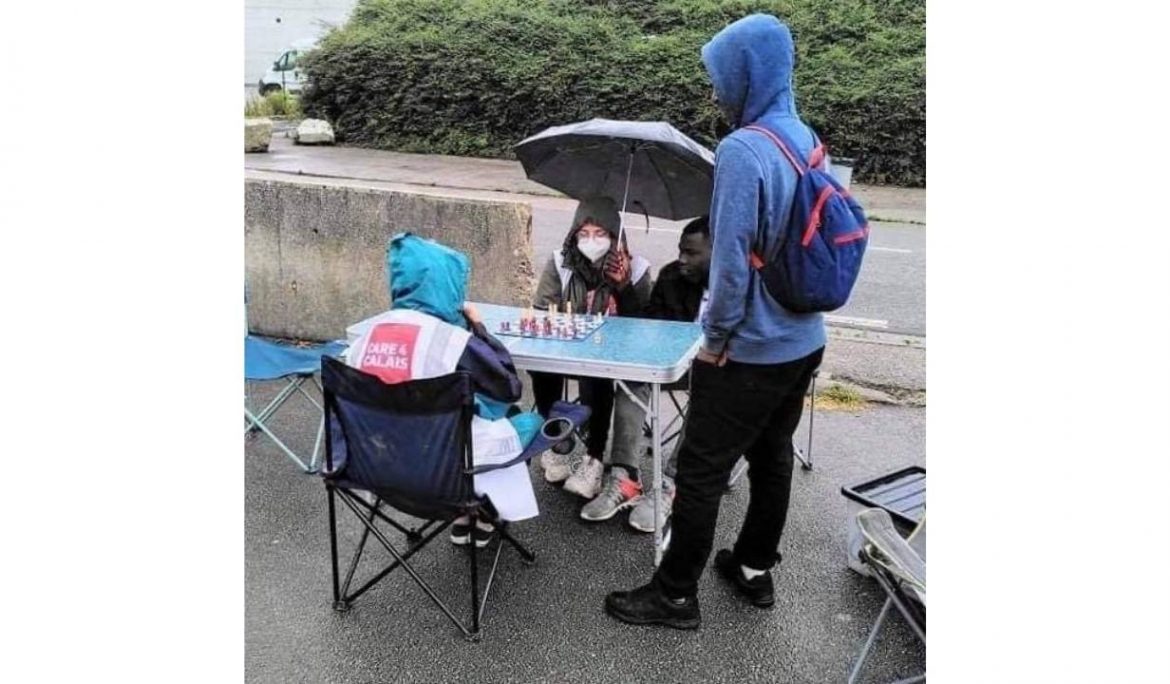 I’ll never forget the chess match I watched between the chess genius on the Care4Calais volunteer team and a refugee who’d come to that day’s distribution.

The volunteer had played chess at county level in his youth, and both me took it very seriously, sitting at their plastic picnic table in the concrete. They didn’t even seem to notice as it began to rain.

I guessed that the volunteer would win; after all, the stress of life as a refugee can’t exactly be the best preparation. Sure enough, he began well, but, as the afternoon wore on, he was slowly, carefully and thoroughly beaten by his opponent.

At the end, they stood up and parted like the friends they had become. It was the perfect image of what Care4Calais does.

When I first volunteered with Care4Calais, I was surprised that we set out games like Jenga, chess and Connect 4 for refugees to play at distributions. I wondered why people living such precarious existences want to sit and play Connect4 on wobbly picnic table with a stranger.  But seeing things like the chess match, I soon reapplied that is exactly the point.  It provides a human connection, distraction, something away from their difficult sleeping and eating arrangements.

Before volunteering I had expected the distribution of donations to be the major activity at the sites.  I hadn’t known about the services, as Care4Calais calls them, and how important they might be for the refugees. These are things like hot drinks, hairdressing, sewing and phone charging, and they’re vital.

Within five minutes of arriving at a distribution site, volunteers set up a generator and a couple of wooden pallets, each supporting dozens of electrical sockets for mobile phone recharging.  When it’s raining, these are covered in tarpaulins.  This instantly draws a crowd of refugees, and it becomes a focus for socialising and chat while they top up their phone batteries.  Imagine how appreciative you’d be, if you could rely on someone to provide a phone charge twice a week?

Within another five minutes, everything else is set up:  hot drinks are being poured to a polite queue of refugees, with milk and sugar being supplied at a separate picnic table to speed up the process.  The other service I least expected was are the hairdressing.  Who ever thought of supplying clippers for hairdressing in the mud, the rain and the cold?

But it’s not only essential, it becomes another focus of social activity especially as the more skilled barbers are awaited by people wanting to have their hair and beards trimmed.  And, for me, every time as I watch, I see people who have nothing, who have been sleeping rough for months and who have no idea what the future holds, stand up from having their hair cut feeling a bit better about themselves.  It’s so valuable.

The thing that really struck me on my first distributions was the politeness and patience of the refugees when when queuing, and the added touch of dignity that I noticed after a haircut.

Many refugees have some English, and a good number are fluent.  A few are keen to tell their stories, but most are more reserved.  The distributions are fast-paced and not the time for chatting, so very often the communication is in a few words and an appreciative flash of the eyes.  One Afghan, having charged his phone, facetimed his mother back home and wanted to introduce me and other volunteers … presumably to show her he was ok.  Another spoke English with a ‘g’day cobber’ Australian accent – he’d been a translator in Afghanistan for Australian forces but wasn’t selected for their nationalisation programme.

Even after my limited time here, and seeing hundreds of refugees at each of the different sites, I recognise many faces.  I know that longer term volunteers become genuine friends with some, and stay in touch during and after the asylum-claiming process. And I can see why.