Hope and love in a sea of despair 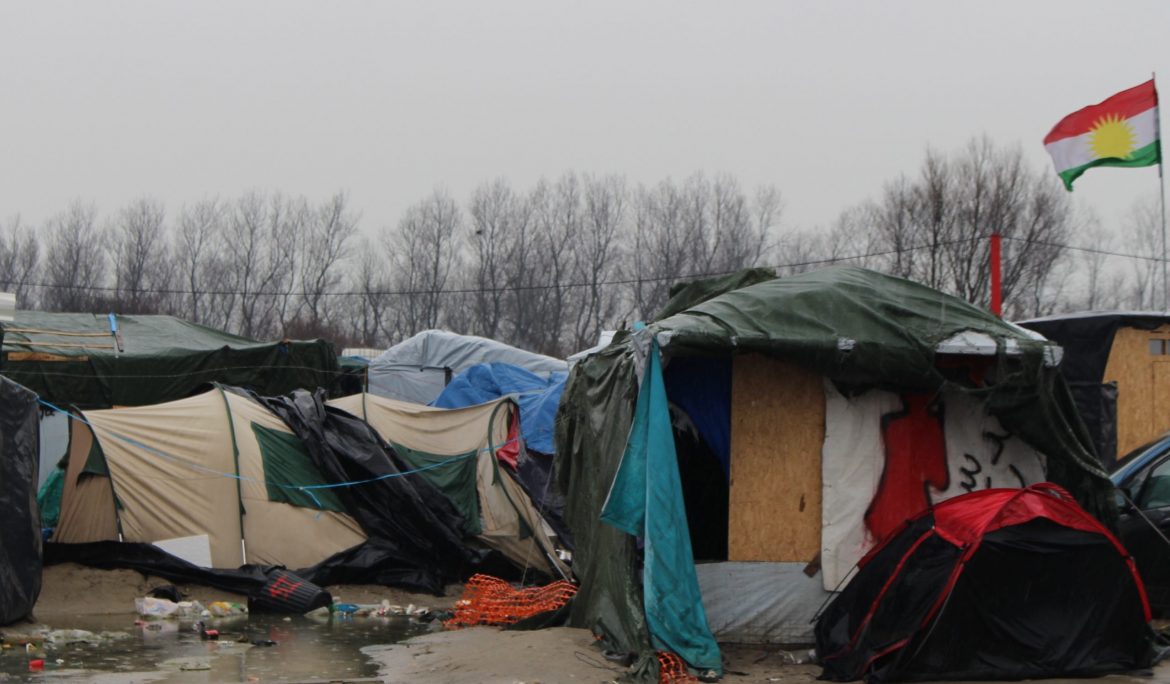 Care4Calais volunteer and humanitarian reporter, Andy Goss describes the scene as tensions mount in the ‘Jungle’, where an estimated 5,000 desperate people cling to the dream of safety, after fleeing conflict thousands of miles away…

The tension was tangible as we moved through the camp. The drizzle had eased, but the fading light of the early evening brought a sharper chill to the air – and many families withdrew to their ragged tents or makeshift shacks early as darkness began to fall.

The bigger concern that evening as we sought counsel with community leaders within the ‘Jungle’ was the announcement that the French authorities were to clear large areas of the camp within the days ahead, bringing new uncertainty.

“They are afraid and many are too sad about what will now happen to talk,” said the Care4Calais aid worker. She had already worked 12 hours that day and had several more ahead of her as the cold, bitter night descended on the camp. Many refugees are still traumatised from months of travel by land and sea, any which way possible, to flee conflict. And the latest news fell on hopes and dreams like a sledgehammer.

Earlier that cheerless day the throb of helicopters overhead had sounded above Calais, along with indistinguishable announcements from unseen public address systems across the town. The word was that the bulldozers were set to move in early. Suspicion and fear had been mounting since the authorities announced they would clear part the camp and move up to 2,000 people later that week.

But the children are curious as we pass and many steal a glance from behind plastic sheeting draped across their shelters, or run out, happy to see European faces that are kind to them – and embrace us, prompting smiles from their parents who maintain a watchful eye at a distance.

It is not easy to find words to describe the appalling conditions vulnerable, desperate people are being forced to live in. An estimated 5,000 men, women and children live in the quagmire of mud and makeshift shelters here – largely a shanty town of ragged tents and shacks, lacking basic amenities.

Many are lucky to receive more than one meal a day. There is no gas, electricity, or proper sanitation. Increasing signs of disease are apparent, heightening ongoing concerns of international medical relief agencies Médicin Sans Frontières (MSF) and Médecins du Monde (MdM) who operate in camp.

Yet still refugees arrive daily from war and persecution thousands of miles away, leaving everything they know, or own, often arriving after many months wearing only the clothes on their backs – grateful to be alive. They hold the dream that somewhere there is a new life; that there is safety.

Somehow they find shelter and food in the camp. But they are not welcome in Calais, or in Dunkirk, where many more families living in even greater depravity. Neither the French or British authorities want them. And accusations of police brutality and far right violence against the refugees grow.

But there is some comfort in despair. An enthusiastic army of volunteers come from across the UK, France and neighbouring European countries to show compassion, support – and deliver aid through a handful of charities able to distribute donations in the ‘Jungle’.

Aged 18 to 80, the dedication of these volunteers who come to do what they can, for as long as they can, is truly inspiring – as are the donations which are pledged and arrive from all over the world on a daily basis. And it is a huge comfort to those refugees living in a sea of despair. For the most part, the dignity and resilience refugees display is remarkable.

“We wait. We do not know the future…” says Ahmed (not his real name), who fled the Taliban in Afghanistan. He looks bent and haggard beyond his mid-twenties, wrapped and muffled against the cold in whatever winter clothing has been donated through charities like Care4Calais. He lost his entire immediate family to conflict. For more than eight months he has been trying to reach the UK, where he has friends and he could use his English skills. Still he smiles and waits. And dreams of one day seeing a better life…

As we continue in our ‘mission’ to talk with the communities in the wake of mounting anxiety among the refugees, a Kurdish toddler peeps from behind the entry curtain of the shack he shares with his mother, father and two siblings. My eyes meet his curious gaze. The little boy with matted hair and grubby face has already seen more suffering than many of us can begin to imagine.

And this night he will sleep in sub-zero temperatures huddled against his brother and sister for warmth in the makeshift shelter made from wood and plastic sheeting. Who knows where he and his family will be a few days from now, when the authorities clear the area?

But there is hope. Legal bids by human rights lawyers and charities to stop the threatened camp evictions by the French authorities. And this flow of enthusiastic, tireless volunteers. Care4Calais alone has so far sorted and distributed around 50,000 items of clothing, sleeping bags, blankets and food parcels, with their infectious enthusiasm.

Indeed, anyone who donates their time, their energy, expertise, their items, their cash, stands shoulder-to-shoulder with aid workers on the frontline in the battle for human compassion for those in desperate need in Calais. And that need grows.

Merci, thank you, danke, grazie… and ‘bon nuit’… from the ‘Jungle’…