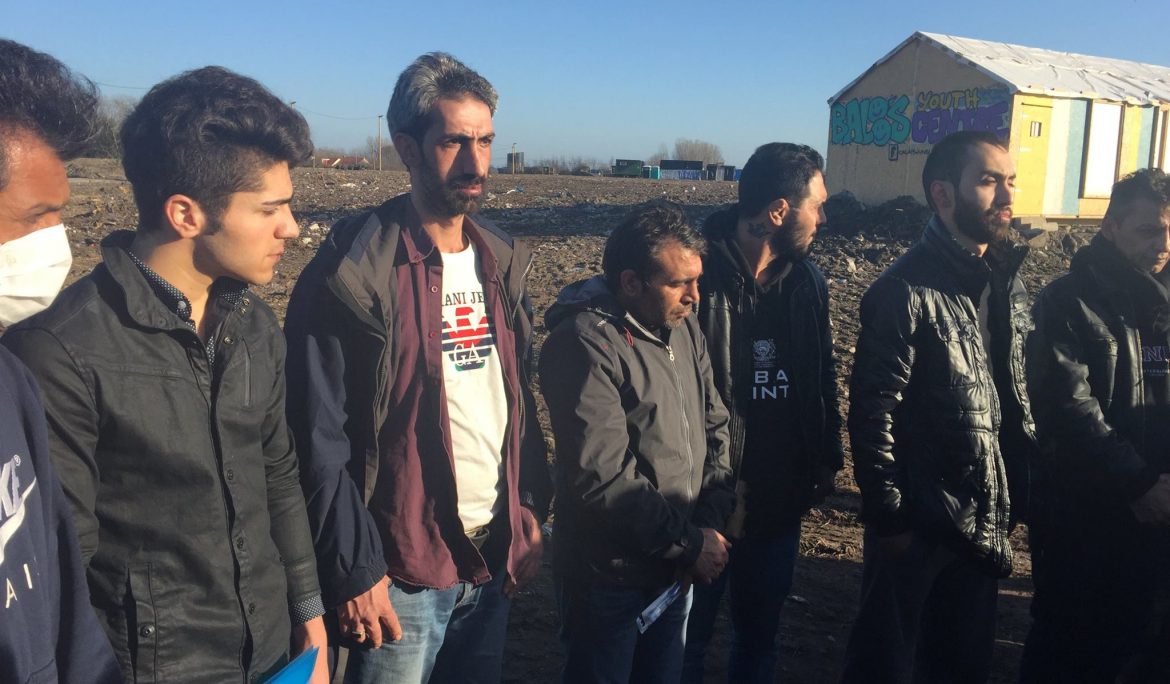 Statement from the hunger strikers in Calais:

We would like to extend our deep condolences to the people of Brussels and all the victims of Tuesday’s attacks. It is from this same violence and terror that so many of the people of The Jungle are running. We must stand together, united as humanity, against violence in all its forms.

In the many months that we have been in The Jungle we have endured living in squalid and filthy conditions. We have all been subject to routine and systematic racist violence at the hands of nationalists, fascists and the French police. This experience of violence is common to all in The Jungle and has occurred on an almost daily basis. For many, including very young and unaccompanied refugees, this violence simply became the norm. Despite the terrible conditions which we found ourselves living in, no practical and humane alternative was offered. The dispersal of refugees across France into frequently uninhabitable centres and the complex, protracted asylum application process left many afraid, desperate and returning to The Jungle.

On 29 February, the French State began their eviction of the southern section of The Jungle. The scale of violence was indescribable. We Iranians were in the first section to be cleared. In breach of promises and court orders the authorities smashed our shelters, beat us, choked us with tear gas and shot us with rubber bullets. We had been given no warning and no interpreters to help understand the process. We had no time to pack our few belongings, we lost everything but the clothes on our backs. It became clear to us that the problems of refugees in France, particularly in the Jungle in Calais, were being censored and all of us were being presented as terrorists and troublemakers.

Our decision to go on hunger strike and sew our lips together as a protest at the inhumane treatment of refugees and asylum seekers was well considered. Our decision was not based on anger but taken with a clear aim.

From the first day we have been demanding:

Furthermore, to fully convey the severity of the problems of those living in The Jungle we requested an immediate visit from a representative of the United Nations to assess the situation. We have also asked for representatives from the British Home Office and the French Government to be based in The Jungle in order to identify, separate and expedite the cases of those individuals with a for family reunification or asylum in the United Kingdom. We believe this is an issue of shared French-British responsibility.

After sixteen days on hunger strike a representative of the government entered negotiations with us in order to resolve the problems of the refugees in the Jungle. We set out each of the problems faced by the refugees. Over five meetings we received nothing but the same standard responses with no definitive plan put forward to change or reconsider public policy towards the treatment of refugees.

The proposals put forward by The State contained only those practical steps that should have been taken a long time ago to ensure humane conditions for refugees in The Jungle. Their plans for the Northern section should have been in place from the beginning throughout the whole camp. It is through the continual neglect of The State that we have all found ourselves in this current situation. We consider it a victory that the French government has been forced to the abandon the destruction of the northern section of the camp and instead to start the process of improving the living conditions there, including security, medical services, legal services, assistance for vulnerable groups including minors, clean water and a paved road allowing access for emergency services to enter the camp.

We have also met with representatives from the UNHCR and the Defenseur des Droits who have assured us that they will issue reports on the conditions of The Jungle. We accept their assurances that they will take appropriate action to secure all our human rights. Our aim was to bring awareness to the problems of asylum seekers in The Jungle. We wanted to tell the world what is happening here and we have succeeded. We have received messages of solidarity from all across the world for which we are very grateful. We want to thank those who supported us, in particular those in France and the UK who have stood by us throughout our struggle. We would also like to extend our gratitude to the Mayor of Dunkirk for creating a safe and humane environment for the refugees in his area.

We have decided to end our hunger strike not as a direct response to the negotiations with the French State but out of respect for those supporting us, who have a genuine concern for our welfare, and as a gesture of faith that the State abide by their limited assurances to protect and improve the conditions of those in the North of The Jungle. There is clearly still much work to be done and this is not the end of the struggle for the human rights of refugees and asylum seekers across Europe. We invite you all to stand with us, united in humanity.