Hype Urban and the wonder of bikes 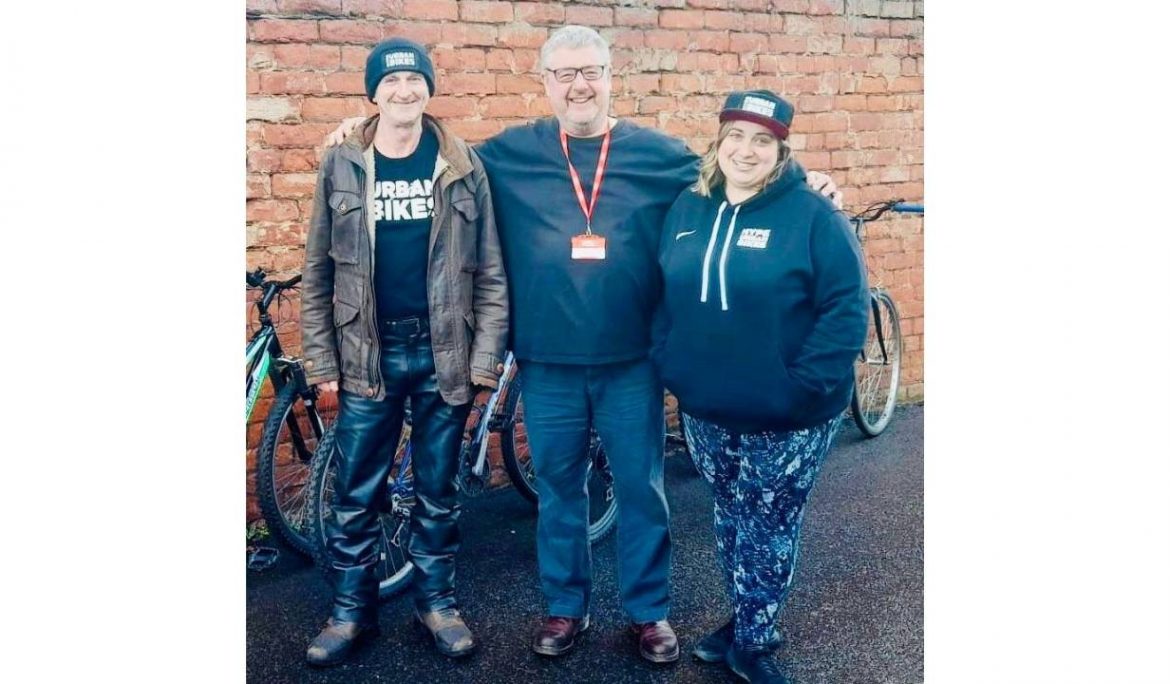 I feel like Santa Claus when I open the back of the van and take out bikes. I’ll go out on a limb here and say bikes are the most valuable thing we can give to a refugee in the UK. Giving a refugee a bike immediately doubles their standard of living, you’ve no idea the doors it opens.
I’m Simon, I’ve been an ‘official’ C4C volunteer since about August but I first got involved with C4C yonks ago, back in 2016. I lived in Liverpool back then and probably through Facebook was asked to take some donations to Wallasey, to a volunteer who was collecting for Calais. I had to laugh when I got there, her house was jammed to the ceiling with tents and sleeping bags and all sorts of other things. I didn’t think my load could possibly fit in! Funny thing was, while I was there the producer for the One show was there and I was asked if I’d like to be interviewed. That was a big no from me.
Anyway, I got more involved with the donation side as it fitted in with my outrage about what was happening on the French coast.
Since then the number of asylum seekers in the Liverpool area has grown massively and the demand is phenomenal and there’s simply not enough volunteers, especially when they are in dispersal accommodation. I think that’s an apt name for it as it disperses the refugees to places they don’t know, it disrupts any community they have managed to make, friends they have college classes and any sense of stability. It’s just another prong of the hostile environment.
I live in Birkenhead now and I work at the college with students who have special needs and part of my role is to find them work placements. My department just happens to be next to the ESOL department which is very useful I must say! Anyway, making this change freed me up to volunteer a lot more.
Through looking for work placements I discovered HYPE Urban Bikes run by Matt Houghton. This is a brilliant initiative; it’s got charitable status and is a free and affordable way for people to find and run bikes. There are special bike mechanics and engineers working there. These guys service old, donated, unwanted and second-hand bikes and bring them back to life for the meagre sum of £30. If you’ve got one hanging around in your shed please give him a shout and he’ll find a way of getting it.
So I thought why not, I’ve got no shame nowadays, I’ll ask anyone for freebies for the refugees! I thought I’ll hit this guy up for a good deal on bikes. I sent off an email asking what ten bikes would cost. An answer came back £300 which was ridiculously cheap, only we didn’t have £300.
I sent another email to Clare Moseley, not expecting an answer for my little project when C4C was growing so rapidly and she is so busy. But I got a reply saying yes, go ahead. I was so happy!
I dream of owning a van but at present I must make do with a roof rack. So when the bikes were ready I had to ferry them back to my house a few at a time. From there they are distributed as and when needed according to a first come first served tracker we have. Everything is recorded and very fair. The first ten bikes flew out and Clare then agreed to ten more! One ecstatic volunteer here!
So why are bikes important? Well as I said, they double a person’s standard of living immediately. They can get to cheap supermarkets, to appointments in a fraction of the time, to the doctors, to college, to drop ins and of course exercise. But they also counter the government’s dispersal strategy because owning a bike gives them a means to explore and discover their new locality, find friends and a place of worship.
When I give bikes out I message the recipient and arrange a meeting place. I arranged to meet Mohamed at the side of a road in Enfield to give him a bike, He’s a Kurdish refugee who was desperate to get to his ESOL classes that were so far away and on £39 a week there is no way he could afford the bus fare.
So yeah it’s the best thing we can give out, if we made it known we were doing this we would have a massive waiting list! It’s cost us just £30 a bike so it’s an amazing deal. My problem now is sourcing affordable and safe bike helmets- they cost almost as much as the bikes! I’m thinking of giving Asda a shout soon.
I’ve not met a refugee yet who can’t ride a bike. I think it’s a preferred method of transport back home for many. They love the freedom it gives them, the wind in their hair and a bit of fun.
I even persuaded my wife to give up her bike to a lovely refugee called Sima, sadly she’s been moved to Wigan now so I don’t see her anymore but I hope she still gets out on her bike. She was so thrilled to get it.
I love the practical side of volunteering, getting out and helping people. I don’t care why they are here, I never ask about their past or their story, I just know they need my help. It’s a lovely selfish feeling to help someone out. It just makes you feel good.
Thank you so much to the wonderful people who donate for funding this, it’s a lovely, lovely feeling to be able to give people bikes you’ve made me a very happy volunteer.
To volunteer or donate go to Care4Calais.org