I Can’t Breathe: the feeling shared around the world 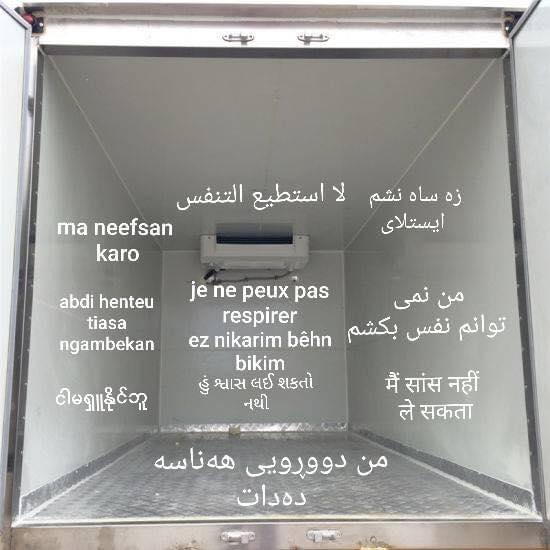 I heard this three times when I was living in Dunkirk. In the middle of the night… some frantic young Kurdish or Iranian man calling me…

At this point you realise that young man will die of asphyxiation, not freeze to death, and no matter what you do he won’t be saved… in one hour he will die…

Message your family and friends brother, I have told the police in Germany, France, Luxembourg and Belgium… Try to make peace with yourself, breathe slowly and hope sometime the truck will stop so that you can make noise in there to gain attention… How much battery do you have left?

The phone clicks off… one hour and you know he will be dead, the GPS doesn’t work inside a freezer lorry so you can’t track them…

Freezer lorries are sealed and rarely get tampered with, so the likelihood of getting across to Britain is bigger, but just by getting inside a lorry with English number plates you are gambling as to whether its actually going to the UK or not, you are gambling with your life.

I sit in my sleeping bag ringing various police and border forces but it’s like a needle in a haystack… and I know that some point tomorrow the gendarme will come and tell me that Hasan, Abdul or Samir is dead… that’s how it works…

– written by Dylan Longman, a volunteer

‘I Can’t Breathe’ links the stories of refugees risking their lives in trucks in Calais; Africans drowning in the Mediterranean; and African Americans dying during police arrest in the USA.

These stories are also linked by helplessness and terror and by political systems that fail to protect those who desperately need it. Something has to change.