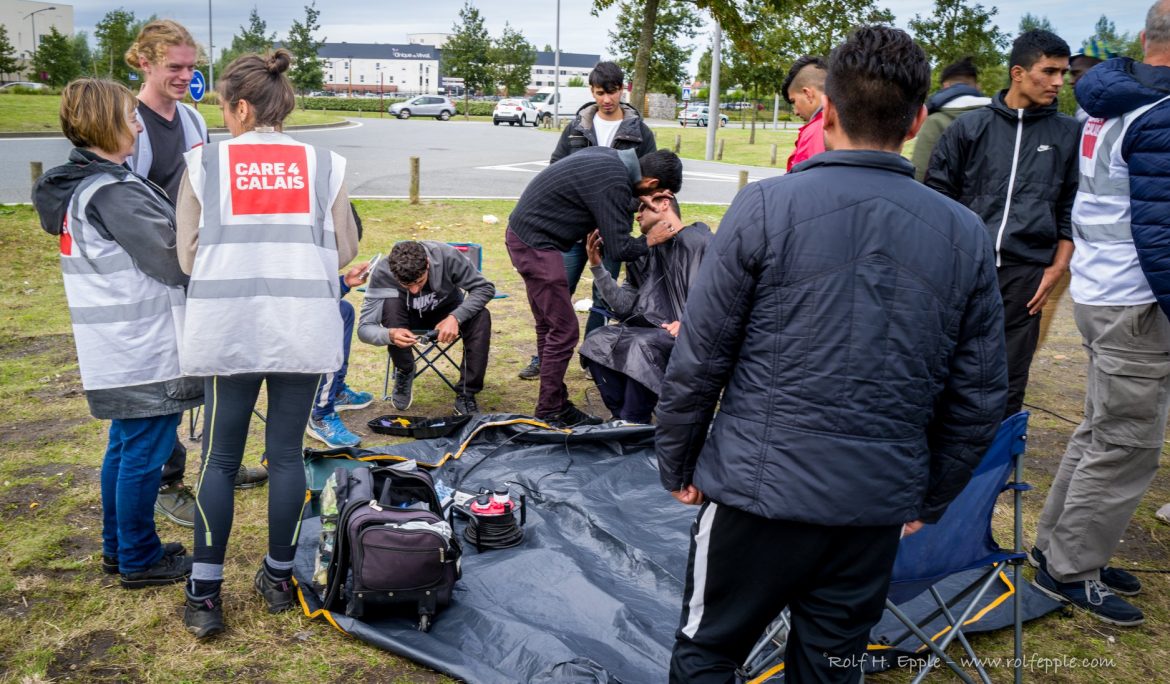 On my trip with Care4Calais I saw boys no older than 14 living at the side of a French roundabout. When we turned up with a bat and ball, they eagerly set up a game of cricket amongst themselves, hitting wild shots into the nearby woods and chasing one another. Behind the tinted windows of their van, French riot police watched from across the road.

When we go to leave, the cricket bat has mysteriously gone missing. The boys are cheeky and deny all knowledge. But Sarah, who runs Care4Calais, says this is a common occurrence – when they’re done playing, they’ll use the bat for firewood.

In these desperate circumstances, communities have sprung up: more than 400 Kurds, mainly Iraqi, have made ‘home’ in the woodlands at Dunkirk, and on the land next to a Calais hospital a small group of Afghan men and boys cook evening meals together on makeshift fires. At the site of the old ‘jungle’, young African men and boys spend hours perfecting each other’s haircuts when Care4Calais bring along their barbers’ equipment. They’re keen to tell you their stories. ‘I was a politician in Ethiopia before I came here’ said one man, forced to flee persecution for his beliefs. At Dunkirk, a young man my age – early twenties – facetimed his sister to introduce me to her; she waved hello enthusiastically. He showed me pictures of his parents – ‘I haven’t seen them in four years’ he told me.

Refugees are stranded in these port towns because Britain refuses them entry, and while political animosity is often directed at ‘illegal immigrants’, there is a failure to acknowledge the fact that there is no legal way for a refugee travelling through Europe to enter this country. This leaves only dangerous methods of entry such as small dinghies, on which many people have lost their lives while trying to cross the busiest shipping lane in the world.

The long journey to safety will not end for many of these people when they reach the UK. For the majority who have not come through special schemes, when they file an asylum claim. But when you ask for safety, you are treated with suspicion. The Home Office language and methods are notoriously complex and navigating a claim can be retraumatising, taking years in some cases. You’ll have to pay considerably too for citizenship, English tests, travel to meet various authorities. The list goes on. The result is a system designed to confuse, patronise and demotivate a person –a ‘dizzying maze’ which sets out to rebuff, not welcome.

But in Calais, there is a deep sense of hope for a new life in the UK. Everyone I spoke to had good reason to want to go to the UK. A brother in Liverpool, friends in Manchester, a dad in London – and many speak good English too, or have lived here before. But whether it is the shared language or a romanticised view left over from colonial days, there is an often mistaken belief that Britain will welcome them.

– written by Ruby Cardona, a volunteer

To volunteer or donate go to https://care4calais.org/get-involved/