“I wanted to paint to deliver a message” 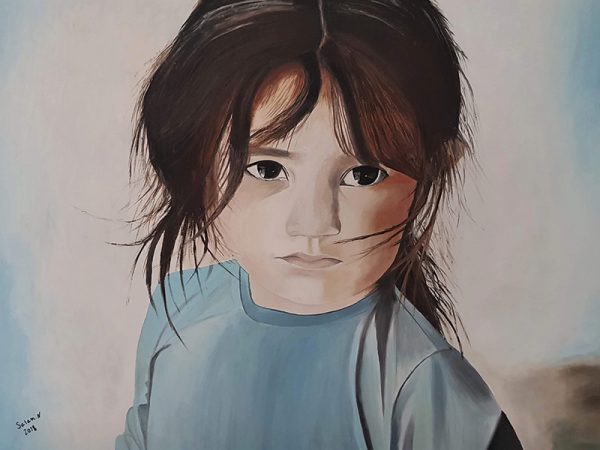 Salam started painting while living in Greece and waiting for his family’s asylum case to be processed.

“I just started without taking classes or anything just on my own. I wanted to paint to deliver a message through my paintings, to tell everyone what it is like to live a refugee life, how we feel, and how hard it is to fight for a better and safer life. I want everyone to know about our situation.

I also play three instruments; Saz, Oud, and Guitar, and play music everyday, as a way to express my feelings and frustrations. It’s just a way for us to express ourselves, to have our voices heard, and to show that we refugees, paint, play music, we are just like you, in the end, we are all just human beings.”

Salam is from Iraq, but had to leave in 2016 with his family because they are Yazidi, which is an ethnic minority. They first travelled to Turkey where they stayed for about one month, trying to cross the Bulgarian border but after trying six times the family was suffering and tired, and they decided to find another way; to try crossing the sea by boat to Greece. They spent one month trying to cross, during which they suffered physically and mentally. After trying three times, they finally made it and reached Lesvos Island on the 6th of March 2016.

High quality art prints and canvas’ of Salam’s work are available on our website: https://care4calais.org/product-category/artwork/