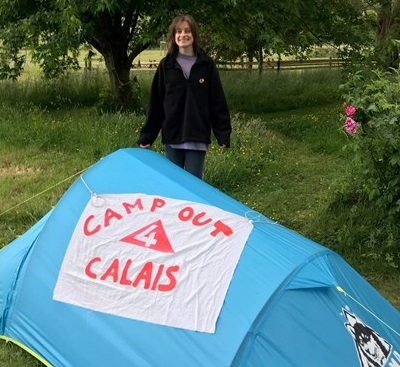 Amazing Emily is spending 40 nights in a tent to raise £1,500 for Care4Calais!

She said: “I chose to support Care4Calais after being struck by a news report on the camps during the virus. Because of the worldwide disruption, refugees have left the public eye – but it is as important as ever to keep on supporting them at a time like this, as they will be the worst affected.”

“I am not trying to experience what refugees are experiencing daily by living in a tent, because their experience is incomparable to mine. I have suffered nothing – and I find myself doing it out of choice.

“It took a couple of nights of getting used to all the sounds, but now, I’m finding it hard to imagine sleeping inside Your body readjusts quickly to the natural light and it’s so rewarding waking and going to sleep with the sun.”

The pupil from Bryanston School has already completed 13 nights under canvas at the bottom of her garden in Dorset. You can find her fundraising page by clicking here.

You don’t have to commit to 40 nights, but you can follow Emily’s example and take action now to help build up supplies of camping gear in the Calais warehouse.

You can join our #CampOut4Calais campaign by clicking here.