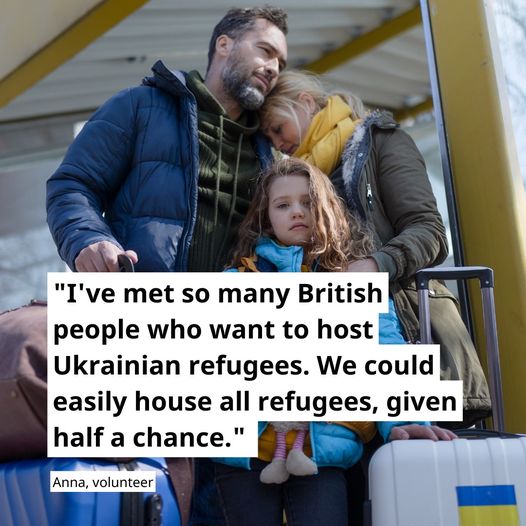 For the last six months, one woman at Care4Calais has been doing an amazing job.

Her name is Anna, and she’s a volunteer helping refugees from Ukraine find safe homes in the UK. Thanks to our amazing supporters, Anna is able to help people fleeing war in Ukraine to rebuild their lives here.

The visa deal for Ukrainians doesn’t always work well so Anna’s help is vital when the system breaks down. “There was one breakdown I was involved in when the family was turfed out for no reason I could ascertain, and they were sat on a bus stop bench with nowhere to go,” she remembers. I got the local council involved and a new host was found.

We haven’t had too much trouble with sponsors breaking down but I know it has happened quite few times for various reasons. There is more trouble with the family visa as the hosts are not checked by the councils. I know of one 60- year-old lady who came to stay with her son, but when she got here there really was no room for her so she could not stay there.”

Anna has been working with the Ukrainian refugees since February when the war broke out. She’s been a long-term supporter of Care4Calais, having run the warehouse in Calais a few years ago.

“I didn’t expect to be working with Ukrainians but it all happened so quickly and the charity needed someone to do this work so I took it on. It was more difficult in the beginning when nothing was clear and government guidance was rather thin on the ground.

“In the beginning there were a lot of people in Calais – they had thought they could go to Calais, get a visa and come straight over. That was not the case, and for some time the Youth Hostel and an Old Folks home was housing the refugees. But they soon realised they had to apply elsewhere for visas or get them before they left Ukraine. So although there are a few people still in Calais the work there has slowed up. Now they need to go to the police station and will still be housed where necessary.

To start with I really didn’t know what I was doing. I would get emails and texts looking for help with matching to sponsors so I would try to help there. I would set up phone calls and zoom meetings so people got an idea of who they would be living with before they came, and this would stop the sponsorship from becoming unstable.

“The Ukraine visa is a good deal to be honest, they get a visa to come into the country and somewhere to live for six months while they get their feet on the ground. They can apply for Universal Credit as soon as they get here and then look for a job and their own house and look for work. We help people get Universal credit and other services they need.”

“To begin with I was on my own but now I have a wonderful volunteer, James who helps with so much. His wife is Russian, so that is a great help. We have had lots of hurdles to jump through with the visa process such as misspellings on visa so they don’t match passports which can take hours to resolve.

We have tried to help people get visas in Ukraine too but there are actually no visa centres in Ukraine so they had to leave the country to apply for a visa and then go back to wait for it or spend all their savings on rent in Poland.”

Although Anna and James are doing a great job, Ukrainian refugees will continue to need help, and to be frank, things are probably going to get worse.

“I am worried about the future. The first six months is nearly up – where are all these people going to live if the sponsors do not keep them on, or they do not get jobs? Also our list of sponsors was always quite small, and its has dwindled over the months, making it more difficult to match requests. I do hope we won’t be putting Ukrainians in hotels.

“I didn’t think it would go on so long, but now it is obvious the war in Ukraine will go on into the winter and possibly longer. Life in Ukraine without electricity in the winter will be bleak and probably cause another wave of refugees.”

In the face of all these challenges, Anna is so compassionate and committed to her work, and she makes a huge difference. She says she sees what volunteers can do, especially when there’s a sensible and efficient way of helping refugees.

“For me it’s been great, when people get here and meet their hosts and feel safe it is a wonderful feeling. I feel it’s been more then worth all the work I’ve put into matching people and am confident they will make a life here. I’ve also met so many English families who want to host. I know it would work with all refugees given half a chance.”

To volunteer or donate, please go to https://care4calais.org/donate-now/