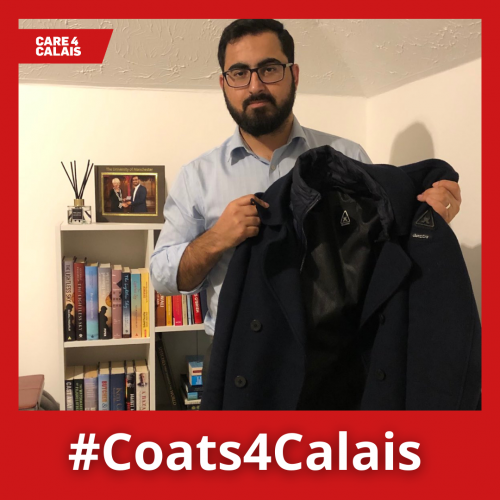 Exactly 13 years ago, Gulwali Passarlay was a child sleeping rough in Calais in the bitter cold. He still remembers how utterly miserable it was there at this time of year. Him and his friends had to live in the same clothes for weeks until they became filthy rags, sometimes infested with fleas and lice. Getting clean, warm clothes from volunteers was their definition of a great day.

That’s why he is donating this lovely winter coat to support #Coats4Calais. He understands better than anyone the huge difference it makes to people struggling to survive outside in the harsh winter. Watch what he had to say about this: tinyurl.com/Gulwali-Video

Gulwali was forced to flee Afghanistan when he was just 12 years old after members of his family were killed during the American invasion. He travelled alone for a whole year before reaching safety in England, where he graduated in Politics and became a published author.

In his book ‘The Lightless Sky’, Gulwali recalls the difference it made to receive support from volunteers in Calais: “Life became a soul-destroying cycle of escape, capture, theft and construction. Only the physical necessities of eating at charity food points, the occasional wash and broken sleep disrupted the cycle.

“It was common to have my charity-owned blanket pulled from me, a screaming police officer shouting in French in my face. Sometimes activists came to the Jungle to form human shields between the police and ourselves. We were so grateful for their empathy and support. It felt nice to have a moment of human comfort.”

Join Gulwali in keeping people warm this year by donating winter coats or helping us buy them at care4calais.org/coats4calais