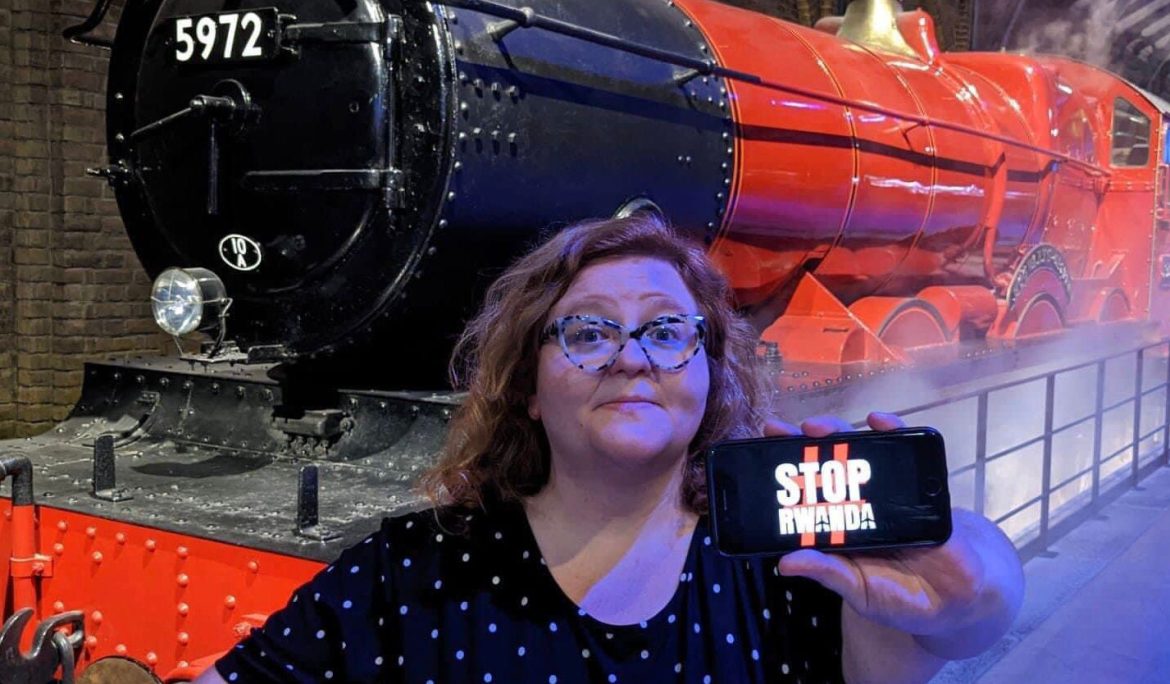 “The word I’d most associate with supporting refugees is joy. Yes, joy!

“Because you see joy on the faces of people when you make them feel safe and wanted, and you feel joy at being part of a team doing good things. That’s why our Care4Calais team celebrates when things go right, and if people are hostile to us and refugees, well, when they go low, we go high.

“If the far right are doing hateful things in our area, we say RIGHT! Let’s have some picnics! Let’s throw a party! Let’s do things that are filled with love!

“You can take activism and make it fun. That’s why you can see me in the picture taking the Stop Rwanda message to Hogwarts!”

Katie Spencer Matthews, our regional lead for West Yorkshire is an irrepressible force of nature. Laughing, chatting and joking all the way, she somehow manages to run a team supporting more than 1000 refugees, as well as teaching drama and sharing a home with partner and a daughter.

She got involved during the Pandemic, first as a virtual volunteer. “The first lady I helped was a survivor of female genital mutilation. She had fled her home because she had given birth to a little girl, and there was there was no way she was ever going to let anybody do that to her child.

“As I helped her and her daughter with clothing, and put them in touch with local services, I realised there must be many more people with stories like that, and it was important to keep going, helping them. And after that I never stopped!”

Katie feels lucky because all the West Yorkshire team gelled quickly, and get on well. Volunteering doesn’t feel like work, because they’re friends. “I mean, it’s no real hardship to walk into an asylum accommodation with a fantastic bunch of people and help lots of refugees, is it?”

She’s helped hundreds of people. One particular big win she remembers was a 16 year old Yemeni boy, who we’ll call A. Katie asked his school to keep him back a year so he would catch up properly, and when the head agreed on condition she found A a tutor, she persuaded a tutor friend called Emily to do it free. She ended up being employed by the school to help other refugees, and grew close to the boy and his parents.

“They have leave to remain now,” Katie says, “the school has a great teacher, and they are basically part of Emily’s family now. If that’s not a case for joy, what is?” She laughs.

You can tell Katie’s relationships with refugees is amazing – they smile when she walks into a room, and some of them take the mickey out of her Yorkshire accent, repeating what she has said. “It’s terrible!” She says, “The Yorkshire accent gets the mickey taken out of it all over the country, and now it even gets laughed at by refugees!”

There are a few downsides, she says. It’s horrible when asylum seekers are waiting for their interviews and you can’t speed it up for them. And when they get moved on quickly, so you don’t get to say goodbye.

She reckons the key to spreading understanding is telling stories. “That’s the most efficient way of gaining support. For a lot of people , a refugee is a statistic; an unknown concept, someone they never met and have no terms of reference for. Just sharing someone’s individual story can change all that.”

To donate to Care4Calais work in West Yorkshire go to: peoplesfundraising.com/fundraising/west-yorkshire-care4calais