Meet Liz, who finds C4C “good for the soul” 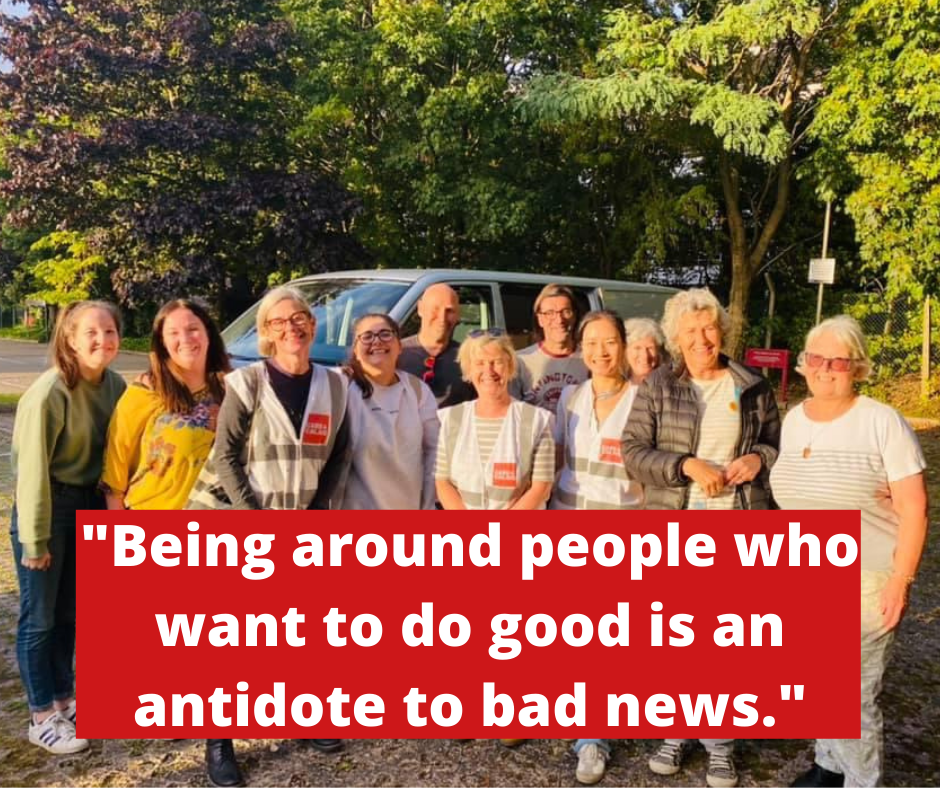 Volunteering with Care4Calais has expanded my boundaries and made me experience things I wouldn’t have thought possible. I’m a lifelong volunteer with different charities, but usually I work on the admin side – I love spreadsheets, logistics, recording donations that sort of thing. But Care4Calais is different. I’ve dressed as an elf for a Santa’s grotto we made for the refugees, and somehow ended up running a knitting group.

It’s even slightly helped me with my huge fear of spiders – and found one in a box the other day which might have put me off going back in ordinary circumstances, but Juliet came the rescue and shooed it outside! The support and camaraderie between the volunteers and refugees is the really wonderful thing – last Tuesday at the hotel one of the refugees, a young girl, ran over to me when we arrived and gave me a hug saying “Hello Liz!” That was so unexpected but rather lovely!

I’m Liz, and I’m actually a radio journalist. Ihave reported on global affairs for many years on the World Service. So I am usually up to date with what’s going on around the world and I followed the Kabul airlift closely. Like so many people I watched the exodus of Afghan people from the comfort of my own home, and found the scenes so devastating, I really wanted to do something. I couldn’t just turn off the TV and walk away. I looked around for a way to help and found Care4Calais and after researching the charity gave them shout.

The Manchester hub started in Stockport then we moved to the Smithfield area. I wondered if people know that during the war Stockport took in refugees from the Channel Islands? There are accounts from children who came of Manchester people being so kind and welcoming, offering pennies (a lot back then) to the children as a gifts. This kindness has been shown again with outpouring of support for the Afghan refugees placed in hotels around the city. I hope the Afghans here now feel the same kindness from the Mancunians as did the refugees from the Second World War.

I also volunteer at the warehouse which is wonderful. We have music on and there’s a good system in place to sort donations which helps. The things don’t stay in the warehouse long as there is huge demand from the hotels in the Manchester area and UK-wide.

I’ve found it to be really good for the soul to be involved with this charity. Just being around people who want to do good kind things is an antidote to being overwhelmed by all the bad news and the state of the world. Being with the ladies at Care4Calais soothes me and makes me feel more positive.

If you’re thinking of volunteering but still unsure, please come down for the day there is something for everyone and everyone can make a difference.