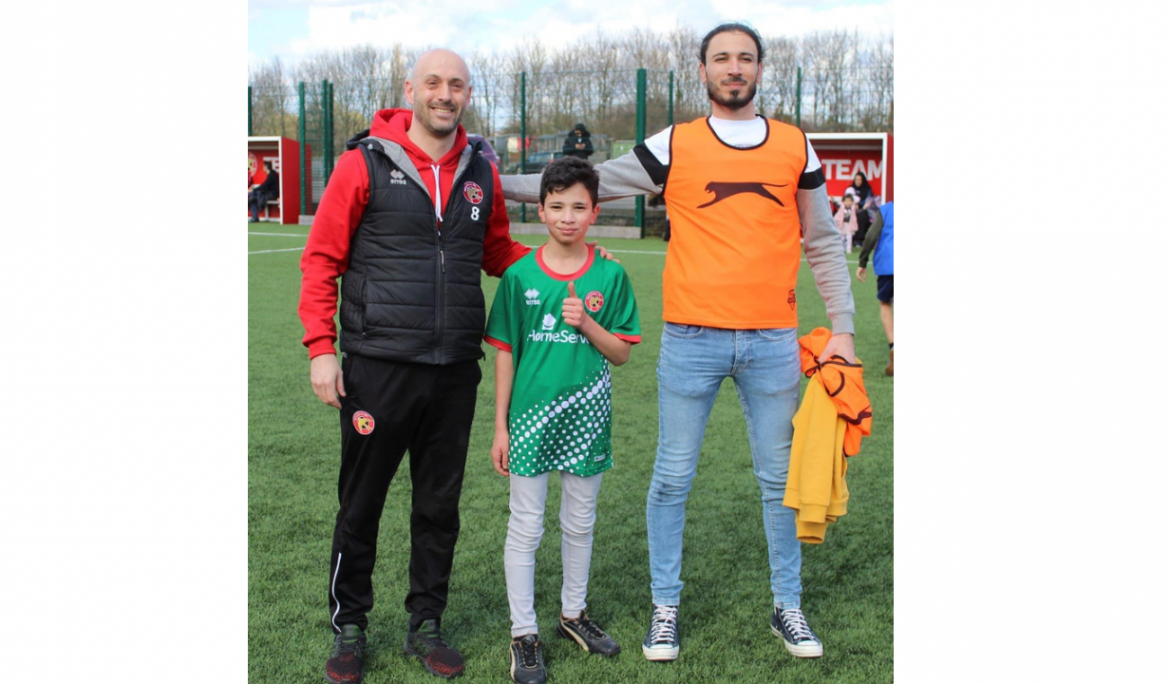 We’re so proud and happy for this fantastic young footballer in the middle of this picture!

His name is Ridwan, and he’s a refugee from Wolverhampton. He took part in a football day out we organised for refugee families we support in the West Midlands. Walsall football club were our wonderful hosts, and provided coaches for the football session.

When they do sessions like this they sometimes choose someone to be “Community Kid” for the day, like a kind of captain from the group. They chose Ridwan, which made us all so happy because he’s such a pleasant, polite boy – he’a also very shy, and never asks for anything, so volunteers and other refugees alike were really pleased to see him get his moment of glory! He had his photo taken, and also received a football strip.

We arrange events like this mainly for children because if they’re in a hotel, they won’t have any play areas or garden and a lot of them have been there probably four or five months. For this one, the children were all really excited – literally jumping up and down.

When they arrived at Walsall’s stadium, they got to play football in an AstroTurf area. Then some of them were selected to go in the box where they could have a meal in the restaurant. The others got snacks and lunch too. After that they went to watch Walsall FC play Sutton Coldfield Town FC. That was great, because some of the refugees had never been to a live match before.

One single lady from Wolverhampton who had really been struggling told us she was glad to have a break away. She met one of her friends who was living in Walsall, and they just spent the day enjoying each other’s company. It just showed that although the day was aimed at children, it actually helps a lot of people just to have a day out.

The families, who have been through so much, really don’t have a lot to look forward to, so organising something just for a day gives them some happy memories. And it made me feel really happy to see them enjoy themselves.

A big thank you to all those involved: the Free Kicks Foundation which paid for the day, Walsall Football Club Community Programme, which hosted the event, and Wolverhampton Council, who funded and arranged a coach to transport families from Wolverhampton.

Thanks also to the local charity Brushstrokes Sandwell which provided funding and accompanied Afghan families from West Bromwich, and the Afghan Community and Welfare Centre, which supports Afghan families in Walsall.