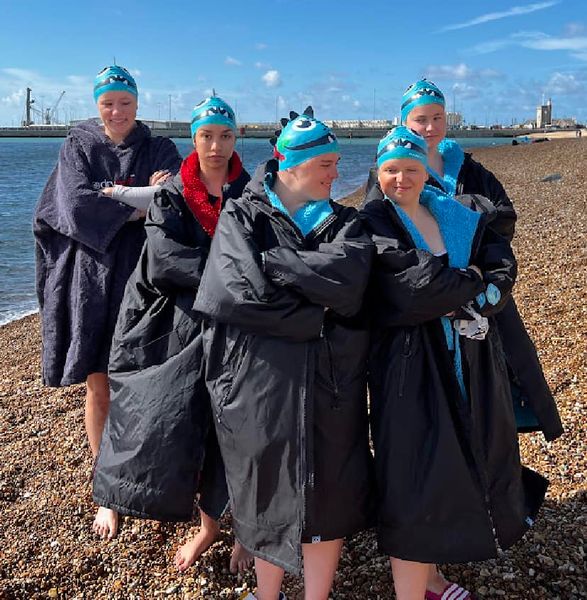 These six girls, all aged 16 or 17, are going to swim the English Channel tomorrow to raise money for refugees.
We have some fabulous supporters but these girls just about take the, er, pickle.
Phoebe, Katie, Cleo, Tessa, Fenella and Freya call themselves the Sea Pickles, which we think is a truly brilliant name! The Sea Pickles decided that swimming the Channel was a great way to show solidarity with the refugees, who often cannot swim when they risk their lives by crossing the Channel in flimsy boats.
This endeavour is such a brave and generous thing to do, and knowing that people are willing to go to such lengths to help refugees fires us with renewed inspiration and belief.
The girls first started thinking about the challenge in September last year. Phoebe’s dad is a veteran channel swimmer, and has done the swim several times to raise funds for other charities. After she decided she’d like to swim the channel with friends to raise money for a charity, the group voted on the most appropriate charity to benefit, and Care4Calais won the vote!
Cleo tells me her support for refugees comes from seeing them treated so badly. “It’s very unfair,” she says. “They have done nothing wrong, and it isn’t their fault that their countries are at war or unsafe. We should welcome people in trouble, not punish them.
The girls began training two or three days in a pool every week, and then in April started to swim in Dover harbour. Cleo says it was only then she realised what they were actually letting themselves in for.
“I wasn’t expecting the cold – it’s so cold out there, and after an hour you’re numb. You’re not allowed to wear a wetsuit or an insulated hat on the swim, you just have to wear normal swimwear as if you were at the beach.”.
She says they haven’t been out of the harbour yet, and admits the thought of swimming in the open water and waves, especially at night, is nerve-racking. I’ve not swum at night, like 2 am-in-the-morning-night, yet. One or two of the others have though.
“We’re swimming as a relay, so one of us gets in the water and swims for an hour, then we tag the next one who then gets in and swims. It’s really hard and mentally challenging to swim for that long in the cold. I think at the beginning we all thought, ‘Oh yeah, this will be fun.’ But you’ve actually got to work really hard to achieve it.’”
The girls have an excellent support team, and will be accompanied by a small boat. Cleo hopes someone on board has a radio to warn them of the huge container vessels passing by.
“We have had great support from our parents and our teachers are pretty impressed. My dad is from Australia though and he thinks we’re mad to be swimming in freezing cold water by choice! But he got us the sponsorship with Collegiate student accommodation, so I know he’s proud of us.”
The same goes for us, Pickles. Good luck!
The Sea Pickles are hoping to raise £3000 for Care4Calais. To support them, please go to: gofund.me/a4789342