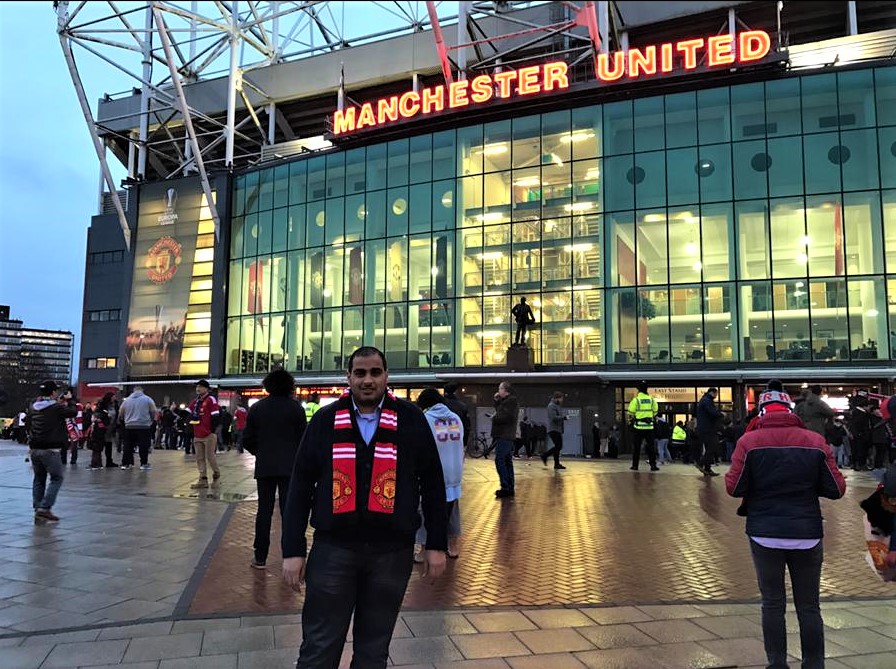 The things that Walid loves most about British culture are football, travel and … queuing!

“When I first came, I noticed the principle of ‘respecting the queue’. I saw how important it is to stick to your turn in the queue and respect everyone. Now if I see someone who doesn’t respect the queue, I’m looking at him like, ‘What you are doing is completely wrong!’

The 28-year-old from Palestine has been in the country for only four years, but feels the culture here is already having a big impact on him.

“I have started having the same principles as the community I live with. It feels like I’m a part of the society. The queue is a simple, very small thing, but if you take it as a principle in your life, with all of your acts or practices following, that would make a difference in your life.

Walid loves travelling the UK to visit friends, but also has good things to say of his new home city, Leeds.

“I like London. Absolutely. It’s very expensive but very amazing. I’ve been to London, Birmingham – because I lived in Birmingham before. Nottingham, the whole Midlands area. I haven’t been to Scotland before, but I’m planning to go as well. Newcastle and Liverpool are the plan after the Covid-19 crisis.

“The best thing about being in Leeds is the city itself. It’s a very beautiful city, people here are very happy, they are very kind. It’s big and you feel at the same time that it’s small. You can live in an area and in just 20 minutes, walk to the city centre. It’s a really good place to live.”

It’s not just sight-seeing that has taken Walid around the UK, but also his love of football.

“I went to Old Trafford. I went to West Bromwich. It’s fantastic! I didn’t expect that. When I watched a Man Utd match at Old Trafford and the sound of all the crowd, the fans, when there was a goal, and how big is the stadium, shaking under your feet – it’s really one of the best feelings ever.”

After volunteering for two years, Walid got a job working with refugees and asylum-seekers for RETAS (Refugee Education Training Advice Service) in Leeds just two months before lockdown. He helps newcomers negotiate the system, and is especially aware how important it is to speak different languages.

“One of my colleagues has learned Arabic. It’s really fantastic seeing a British gentleman or lady speak Arabic. You can say, ‘Yeah, this guy’s British, with green eyes, and then he speaks Arabic! Wow!’”

To volunteer or donate, go to care4calais.org/donate-now