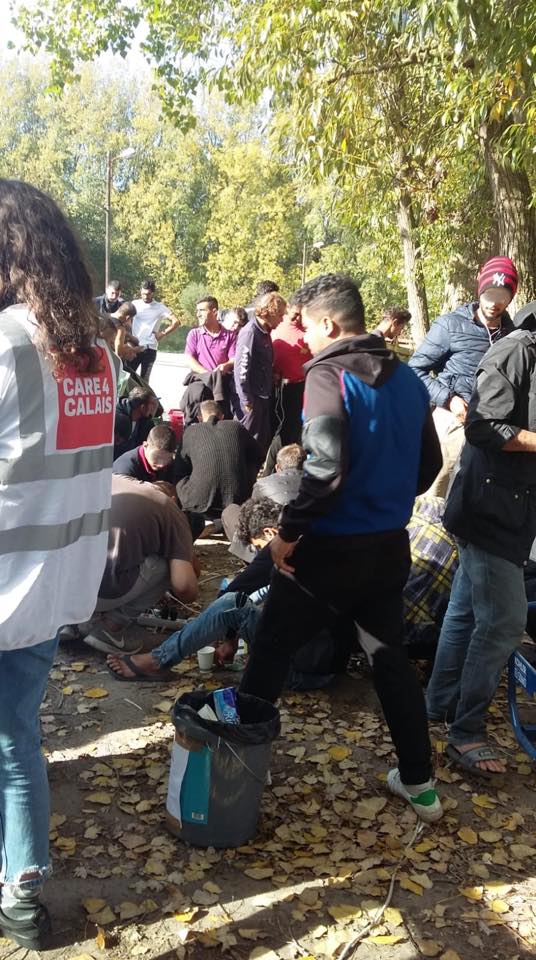 On Sunday the sky was huge and blue, and the sun was shining in Calais. We went to a site near the hospital where around 50 or 60 displaced people sleep out of view of the French police in the overgrowth. Most people here are Kurdish and Afghani, and I meet some Iraqis and Iranians too.

Sunday it was t-shirts, toiletries for the women, colouring books and small toys for the children, tea and coffee, a generator with hundreds of cables so phones could be charged, biscuits, dates, nuts, and a barbering station. After the generator was set up we started unloading t-shirts. Care4Calais have a system this means aid can be distributed quickly, and fairly, which is vital especially in times of great need and desperation where tensions can run high.

Some of the Asylum seekers who were used to this system merrily took the piss and chanted ‘Line! Line! Line!’ While playfully jostling one another. Andy, the group leader, joked with the men in queue and with those that had been there for a while, it was clear there was a genuine connection between them. One man, with his hair in a top knot, and a persistent smile announced ‘oh not bloody ‘Primark’ as he was handed his t-shirt, peeling the £2 sticker off.

Kadaar* was a young Afghan man, he’d escaped the violence of Afghanistan and had been living in London for several years. Not a Londoner myself I could feel that I was frustrating him by not knowing the names of the areas that he’d lived, and he only stopped listing places when I finally agreed that I’d heard of Wembley. Kadaar was incredibly charming, funny, and enthusiastic. His language was peppered with British idioms. He’d been in the camp for a few weeks now, after leaving to visit relatives and finding himself no longer able to return to the UK.

He was not alone in this sort of story, I heard about a Pakistani man who’d spent 12 years in Glasgow working as a butcher, leaving to visit his dying dad and no longer able to re-enter, I spoke to Abed* who’d lived in the UK for 15 years. His family are there, he enthusiastically spoke about Manchester, the city he still calls home, and Basir* and Iranian who’d arrived in the UK with the use of a fake passport 5 years ago. He swapped stories with another volunteer about the best Persian restaurants in London.

The French police turned up while we were there. They stood across the street, watching us and smoking cigarettes. I heard stories about how the police here had taken mattresses from the asylum seekers and burned them in front of them.

Moska*, and Afghan woman roughly my age, 25, told us how she had to dismantle and hide her tent at the break of dawn for fear that the police would take and destroy it. Moska had never been to the UK before, she wants to go because that’s where her remaining family are, everyone else is dead.

The last part of the day, once all the food and aid were dispersed, was spent drinking tea and chatting to the asylum seekers on the lawn. An impromptu dance circle broke out and sitting on the grass in the warm sun it seemed kind of idyllic, like a family picnic. Except with the police watching us closely. I sat with Abed and drank black tea sweetened with honey. I asked him what he was going to do later, and he said he might do what he does often on clear days like today, and that was go to the beach at night and look across the black sea, and he might just see the sparkling lights of home twinkling in the distance.

*Names have been changed because I’m not a grass

– written by a volunteer