Mohamad and the Policeman 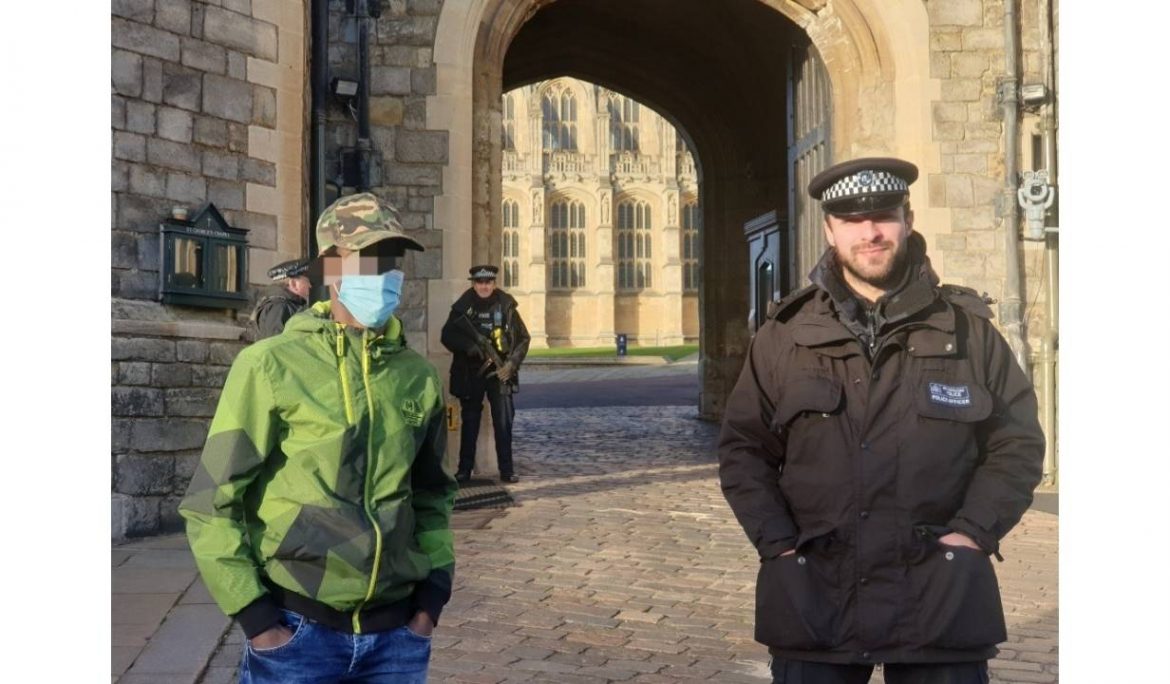 Mohamad fled his country after being attacked with an axe, and his treatment in Calais left him with a fear of policemen. So when I introduced him to another police officer in Windsor, I wasn’t sure what would happen…

I live near Slough, and work as a volunteer in the UK with Care4 Calais, and one day last year I heard that one of the refugees in a Slough hotel needed a dental appointment. He didn’t know how things worked, so I said I’d take him.

He was called Mohamad. It soon became apparent that he was new to the country, he was very young and didn’t speak very good English at all. However, he did manage to communicate to me that when he left Sudan, some men were attacking him with axes  – I mean, I think it was axes, his English isn’t great – and he had a broken arm. This had led him to run away from his country.

Anyway, I tried to set him up with a dentist but it didn’t go well, so I said, “I’ll take you to A&E and we’ll get that looked at.” So I ended up sitting with him in A&E and it turned out that his journey to England had taken so long the arm had “fused broken”, so they didn’t want to re-break it, reset it. He had such sadness and such grief, and there was something about him that looked broken, not his arm, his emotions. You could just sense this black cloud over him in his hopelessness. And when we came out, he showed me that the doctor had given him £10. That’s just unheard of.

I just couldn’t bring myself to drop him home. It was almost like he was trying to hold on to his tears, and I didn’t want to drop him back to his hotel in the state that he was in. You know, I’ve got a son his age.

I said to him, “Do you realise you live near the Queen?”

“Do you want to go and see her house, her castle?”

So we went five minutes up the road from the south of Windsor. As we walked along the road the Long Walk is, I could see his face lifting because I was enthusiastic, and I could see he was coming out of his shell.

As we approached the castle via the Long Walk, I asked him, “Would you like me to photograph you next to the police at the castle?”

“No, no, no,” he said. “I’m frightened of the police.” He meant the police in Calais, not Sudan. He’d had such a traumatic experience with the police in France that he didn’t want to go near the ones here.

So I took on that mummy role. “Come on, we’re going to go and see them,” I told him. “This is a different country in a different situation. And you need to get over your fear, because these are the people that will help you if you are in trouble in our country.”

He really was frightened. But I kind of frogmarched him confidently towards the policeman, and I said, “Is it okay if we have a photo with Mohamad?” And of course he was a tourist policeman, so he was used to doing photos every day. He was so friendly and chatty with Mohamad.

He said, “the only downside is that because of corona we have to stand two metres apart.”

Mohamad was totally terrified, and then it was like a cloud had lifted from him. I took a photo of them both.

As we were walking back to the town centre to the car park he said, “When I get to do my studies I want to be a policeman.” So just in that moment, he’d gone from being hopeless and having a complete fear of his life, and thinking he was going back to a room where he could have been in tears. That man, with his friendliness and acceptance of Mohamad had without realising it not made him not feel safe, he’d made him want that as a career.

I was so inspired by Mohamad’s change of heart because he said to me when we were in the waiting room that when the men attacked his arm, they had taken his girlfriend. He thought they had probably killed her. He does not know and he hasn’t been able to contact his girlfriend and he’s heard nothing from her since she was taken.

She had been pregnant at the time.

It’s easy to forget that little things we do or say to strangers without even thinking can help, or really hurt people. There was this young man from Sudan, alone and frightened, and feeling he had no future at all, and that one bit of kindness from a complete stranger gave him confidence, and hope in his heart. And we all need a bit of that sometimes.

A moment’s shared friendship and kindness can change someone’s life. Would you do it for a refugee or asylum seeker? Come and try it: care4calais.org/get-involved/