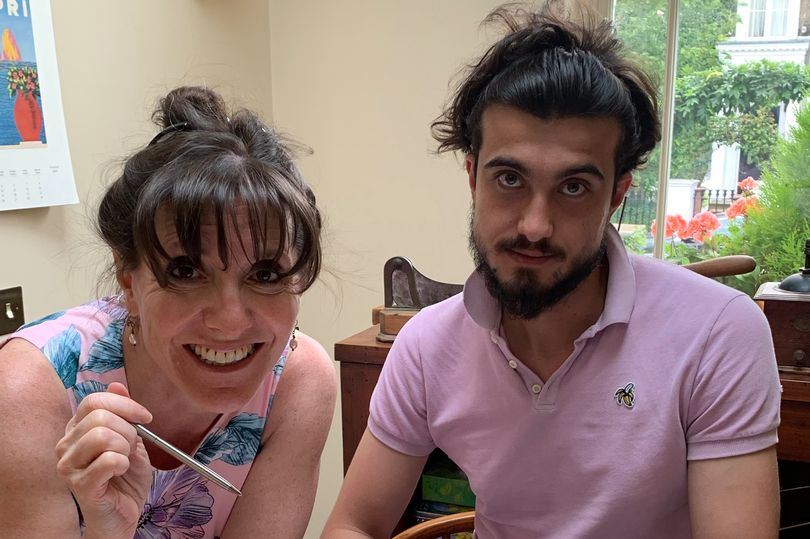 For Karina Litvack the current refugee crisis is a cause she identifies with closely.

At the age of 12 one of her grandfathers fled Poland to Canada after persecution in the 1920s, while two of her other grandparents sought safety in France in the 1930s when the Nazi movement was gaining ground.

They later lost most of their family members in the Holocaust.

The 56-year-old explained: “I have very bad survivor’s guilt – only a small number of people survived from the Holocaust.

“When you see what is happening in the world at the moment, I want to do something.”

And what she is doing, is opening up her home in Notting Hill to refugees from around the world.

Some stay for a few weeks but others can stay for years.

She first hosted a refugee from Syria in May 2017 and enjoyed the experience so much she has since hosted another 15 from around the world.

They have come from the likes of Kenya, Ethiopia, Pakistan and Iran.

“I like coming home and seeing all the lights on,” she said. “I like when the bedrooms are full.”

As she says this, Ms Litvack is smiling lovingly at Basel, 25, the first refugee she hosted who has lived in her home for the past two years.

The 25-year-old left Syria when the country’s civil war all-but-destroyed his hometown of Aleppo.

“Every time I see Syria on the news it’s so painful – when you see the houses destroyed and the children crying,” Basel said.

“I remember how I escaped and the memories just come back – when I see someone suffering I feel guilty that I can’t do anything.”

Ms Litvack added she completely sympathises with how Basel feels, as someone who also grew up in a family of survivors.

It took Basel four-and-a-half years to reach England and, after time in the Calais Jungle and walking all the way from Greece to Germany, he was put in touch with Ms Litvack through a charity which supports refugees.

He said: “She treats me like a real mother – she has helped me so much.”

When Basel’s brother was imprisoned for months in a Turkish prison, Ms Litvack even enlisted the help of a lawyer to fight the charges.

“It was really hard on me because I couldn’t tell my parents [who were still in Syria] but she gave me the support that I needed,” Basel added.

Ultimately Basel’s brother was released and now lives in Italy. Before he left Syria, Basel was a maths student. Now in Britain, he is working at Starbucks and is due to start an engineering degree this September.

“It’s very different but I feel at home,” he said.

For 19-year-old Adam, whose name we have changed for the article, living in Notting Hill is a safe haven compared to the turmoil of the past couple of years. After leaving Sudan at the age of 17, on his mother’s insistence, he had not had a place to call home for two-and-a-half years until he ended up at Ms Litvack’s.

His situation is fraught as his application for asylum was rejected by the Home Office last month. The charity Refugees at Home contacted Ms Litvack who took him in. Adam had lived in Libyan refugee camps, and travelled through Italy and France, before arriving in England.

After evictions, wrongful arrests and shared Home Office accommodation, he ended up in a homeless shelter which he was told he could only stay in for five days.

Now, Adam is filing a fresh asylum application, and attending private English classes in preparation for an electrician’s course which begins in September.

He had never been to school in Sudan, but his progress in English is impressive.

“I miss everything, especially my family,” he said quietly.

He lost the contact details for his family of six when he was in Libya and has no way of contacting them.

According to the UN there are more than 25.9 million refugees around the world – more than half of whom are under the age of 18.

Ms Litveck gestures to Sangpo, whose name we have also changed.

The 25-year-old, who is also living at her home, left Tibet when he was just a child.

“I don’t know what is home for me,” he said. “I left Tibet at the age of five, so I never felt like I belonged anywhere.”

Sangpo was sent across the border by his family to India in pursuit of an education and the chance of a better life.

He explained that his father had been jailed for political reasons back in Tibet.

After many years in India without his family Sangpo eventually made his way to Britain.

After a gruelling asylum process his application was finally approved and he now attends a British university where he is studying economics and finance.

He is also completing an internship at a private equity firm and his prospects seem limitless.

Like everyone else who comes to stay with Ms Litvack he is grateful for not just her hospitality but the hospitality of Notting Hill as a whole.

“It’s a really nice place,” he said. “Everyone has been so welcoming.”

For Ms Litvack anything she can do to make the lives of the refugees better is deeply rewarding.

She added: “I got involved in this because I had been deeply troubled by the refugee crisis for many years and was looking for practical ways to help.

“I happened upon a newspaper article about a couple hosting a Syrian woman, and the article mentioned the charity so I signed up on the spot.

“My own family has experienced [being refugees first hand] – all four of my grandparents.

“In one case a brother [of a grandparent] was barred from boarding the boat to Canada because he was on crutches – he was killed by the Nazis.

“On the other side [of the family] all but four perished in the camps. Three of them – my mum [then a toddler] and her parents – were hidden by a very brave French woman, who put her life at risk.

“I figured I could at least offer a safe home. I face nothing like the risk this woman took.”

Ms Litvack often thinks about the relatives the refugees have left behind.

‘I think of their mothers’
She said: “I cannot begin to imagine how the mothers of all these brave, often very young, people must feel at the thought of their kids setting off to an unknown land, facing overwhelming danger.

“I always tell Basel I’m doing this first and foremost for his mother, who I know worries about and still misses him terribly.

“I often think of those women on the trains out to the camps in Poland during the Holocaust who would hand their babies to total strangers when they briefly stopped in the train stations and begged them to take them, or the ones who shipped them off on the Kindertransport.

“I hope I would have the strength to do that, and faith in others to take good care of my children when I couldn’t do it myself.

“So I feel I want to give these mothers a bit of peace of mind. Sadly only one of the three I am looking after right now knows someone is looking out for their child.

“Sometimes I feel overwhelmed with despair at the horror of what humans are capable of doing, so doing this helps me console myself that there are tiny ways in which we can resist.”

To host a refugee in your home contact Refugees at Home.