In the last two weeks the police have made an outstanding effort to make life hard for the refugees. 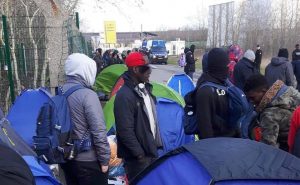 We somehow got used to clearances that have been happening around twice a week for months – that should never have become normal – however now they are making it shockingly clear they will not allow tents in any of the places where refugees have been sleeping over the winter. This morning a further large scale clearance is taking place in the Dune Industrial Estate, following the aggressive action on March 12 when hundreds were bussed miles away and many arrests were made.

In the last two weeks there have been increased forcible clearances and arrests, more smashed mobile phones, and the refugees are tired, battered, confused and scared. The atmosphere has been increasingly tense following the death on 9 March of a 20 year old man in a lorry, and the terrifying deportation of a Sudanese man back to Sudan this week, where he may well face torture or even death.

This is a return to the days post October 2016 where the only places people could sleep were under hedges, bridges, park benches and in the mud. Can you imagine never getting a proper nights sleep and being permanently scared?

There was speculation in the press about whether the refugees were scared of Brexit and were they trying to get to the UK before it happens; but I can’t help but question – maybe the authorities are more scared of Brexit? They are certainly taking a stand.

Please remember the desperate people in Calais. They have already suffered so much, that is is happening when they have turned to us for help is devastating.