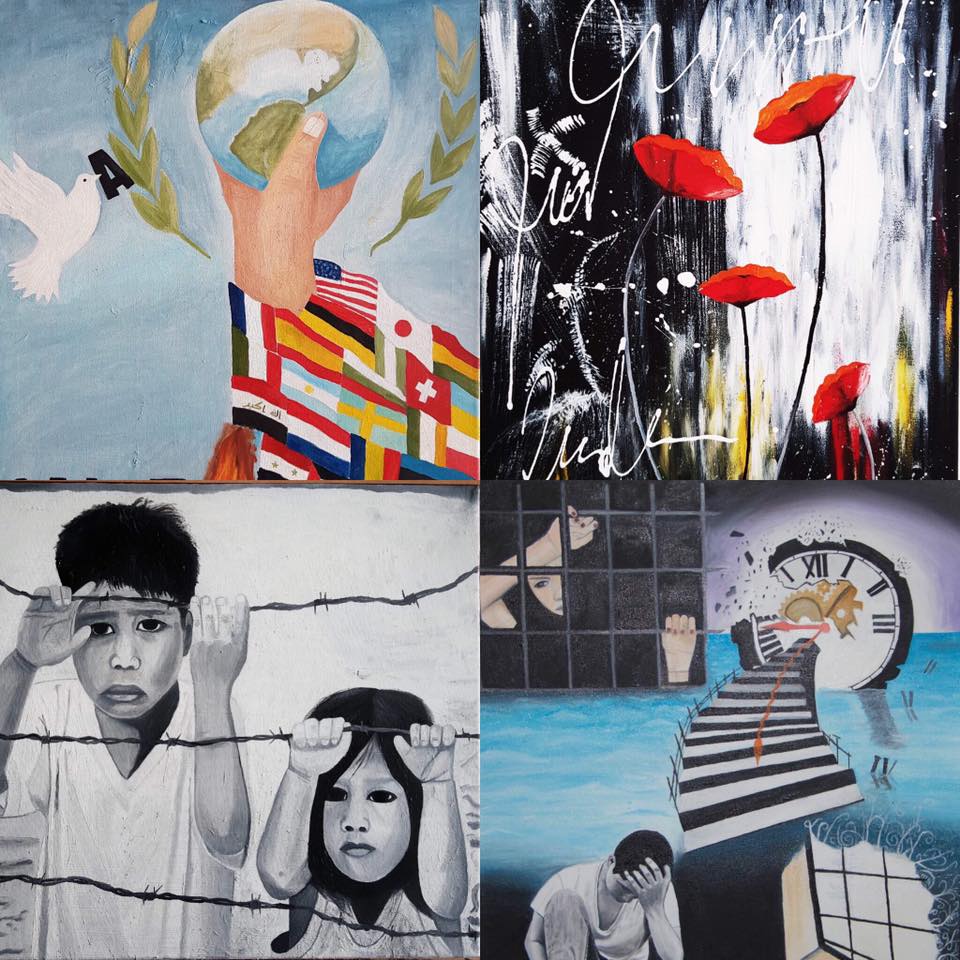 My name is Salam. I am from Iraq, and I am 28 years old. I was living in Baadre village in Kurdistan, with my family of 14 members. We were living in difficult material conditions. We were threatened because we are Yazidi, which is an ethnic minority. Despite all of this, we challenged life’s difficulties and started going to school to get a proper education. We were high achievers at all levels. That is when I started my studying journey.

I studied six years and completed my primary school. But then I had to stop studying because we couldn’t afford the fees, and because, as I have a very big family, I needed to earn money to support them. I started working in order to give my brothers and sisters the opportunity to finish their studies.

Ten years passed, and after they all graduated and had jobs of their own, I started to think I could continue my studies. But because it had been ten years since I had left school, I was not allowed to go to school anymore. That is why I started to study at home. I was only allowed to go to school for my exams. I was studying hard and working at the same time, with no teacher to teach me. To get a teacher, you need to pay, but unfortunately, I had no money. The money that I earned from my work, I gave it all to my family. But I never gave up and continued to study on my own.

Sometimes, my friends helped me. Finally, after many years, I completed high school. I was so happy that I couldn’t believe it because my dream had finally become true. All of this was thanks to my mother. She supported me the whole time and pushed me to continue my studies.

Because my average was not very high, I couldn’t go to University yet and had to wait one more year. But after that year, I was finally accepted in the Faculty of Education and Arabic in Kurdistan, (in Akre elimination). The University was far from our home, about one hour’s drive away, and I had to pay 220 US dollars for the car driver every month. This amount of money was too much for me, but my brothers told me that it was important that I complete my education. They said: “You stopped your studies because of us and now we want to help you achieve your dream”. And so, finally I went to University, and I was so proud, in front of all of my friends. I finished my first year, and I was one of the best, top five students. I was also in the top ten list for the second and third stages.

In the fourth stage, I only studied six months and it was to be the last year. I only had two more months of studying to graduate. But one day, when I came back from University, I heard my family talking about the fact that we had to leave Iraq and go to a safer country. When I heard this I was in a shock and I couldn’t believe what I was hearing. I knew if we left, I would not graduate and make my dream come true. But I had no choice, I had to go with them.

The decision was made to leave, but first, we had to find a way to collect the money necessary to make the journey. Because we are a big family, we needed a lot of money to pay the smugglers. So we decided to sell our house to a smuggler who would promise to take us to a safe country in Europe. Our house, the house we had built with our own hands, and which we had worked on for two years, day and night. We had dreamt of this house a long time. It was the only thing we had, and now we had to sell it. My father found a smuggler and told him: “We will give you our house if you take us to a safe country”. The smuggler accepted and so, we sold him our house. We also had some goods and furniture in our house which we sold too, because we needed money for the journey. Because we were under the pressure to leave as quickly as possible, we had no time to bargain properly and sold our goods at a very cheap price.

Then, we started to prepare ourselves for the long journey ahead. I went to my University for the last time, to say goodbye to my friends. I told my friends that I was sorry to leave, but I had no choice. I didn’t want to leave but I had to. There were tears in my eyes when I left the University because I was about to give up on my dream.

On the 9th of February 2016, we traveled to Turkey. We stayed in Turkey for about one month, trying to cross the Bulgarian border but we couldn’t, after trying six times. The family was suffering and tired, and we decided to find another way; to try crossing the sea by boat to Greece. We spent one month trying to cross, during which we suffered physically and mentally. After trying three times, we finally made it and we reached Lesvos Island on the 6th of March 2016. We stayed in Mytilene for six days, and then we were taken to Ritsona Refugee Camp on the 13th of March 2016.

My father and mother, with seven of my brothers and sisters, were relocated to France on the 20th of September 2016.

I’m married now, and here with my wife. One of my brothers is also married with a son, and both our families are considered independent of my parents, and so we were not relocated with them. So the five of us after 6 months there were also relocated to France, where I lived in Bordeaux for a while. Now I am located in Forbach.

I started painting while living in Greece and waiting for my family’s asylum case to be processed. I just started a few months ago, without taking classes or anything just on my own. I wanted to paint to deliver a message through my paintings, to tell everyone what it is like to live a refugee life, how we feel, and how hard it is to fight for a better and safer life. I want everyone to know about our situation.

I also play three instruments; Saz, Oud, and Guitar, and plays music everyday, as a way to express my feelings and frustrations. It’s just a way for us to express ourselves, to have our voices heard, and to show that we refugees, paint, play music, we are just like you, in the end, we are all just human beings.