Refugees and volunteers have a kick-about in Calais 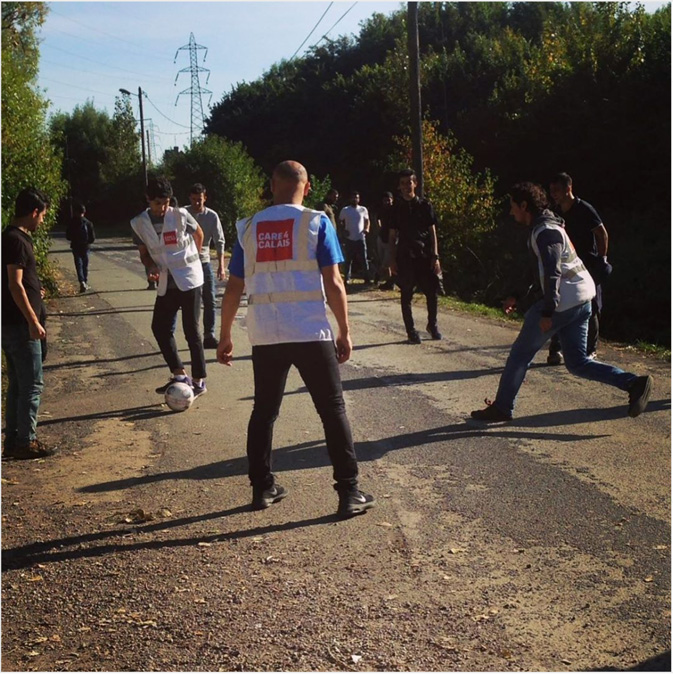 “I decided to volunteer after finding out that there were still thousands of refugees living in northern France, only a few dozen miles from the Kent coast. It really hit a nerve and I wanted to do something to help them.

My first distribution was a real eye opener.

We arrived in an area of Calais, not far form the warehouse. There was already a long line of people waiting. They had no idea what we were distributing, but they were waiting patiently, nonetheless.

I realised very quickly that distributions like these are a real lifeline to the people living there. We gave out all of the clothing we had and closed the van, despite there being many people still waiting for items. It was heart breaking.

After the distribution we started serving hot drinks and a few of us started having a kick about with a football that we’d bought with us. I noticed a teenager, about 16 years old, sitting on his own, so asked him if he wanted to join.

We kicked the ball back and forth, he laughed at my horrendous footballing skills and for a brief moment I forgot where we were and why we were there. That moment felt no different to all the times I had played football with my brothers. We played for what felt like hours, I didn’t want it to end.

After a while, I noticed some of the other volunteers had started to pack away the tea and coffee station. It was like reality came crashing down for me, we were leaving.

With big smiles, those we had been playing football with gave us hugs and waved us onto the minibus. They made their way back to the area they were living, outside, with no basic provisions. The only difference between us on the bus and those wonderful people we had just met, is sheer luck of circumstance.

We were born in a safe country, they were not.”

Written by a Care4Calais volunteer

Inspired to volunteer? Find out how you can get involved.