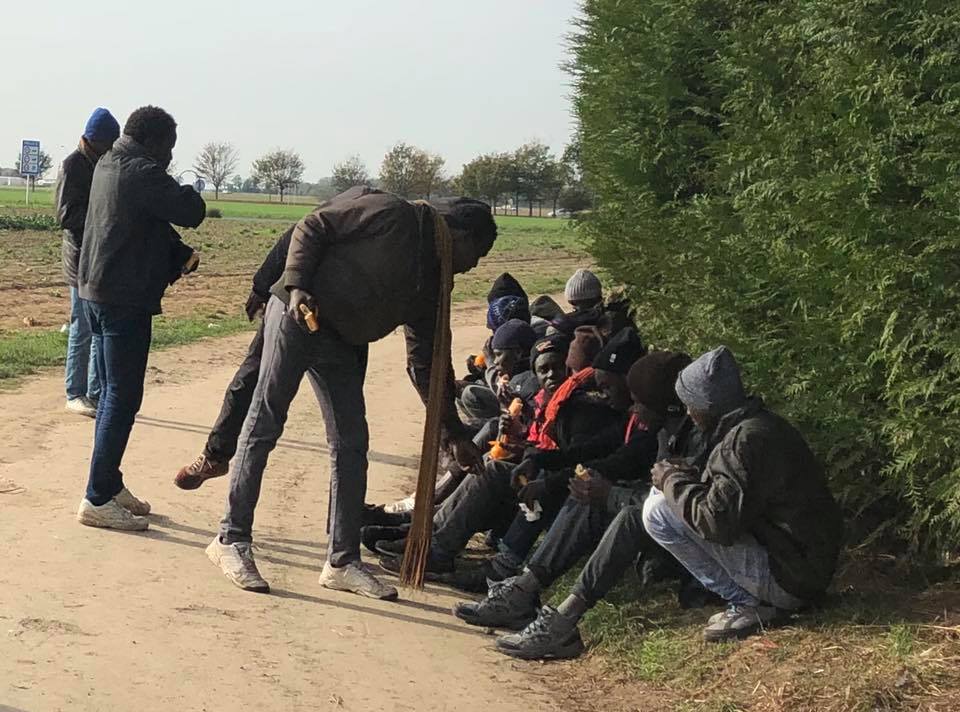 Today we have been in Ouistreham where 200 refugees, mainly from Sudan, are sleeping rough in a patch of trees at the side of a farmers field.

Ouistreham is a small port town about four to five hours drive west of Calais. We had been told there were around 100 people there but in fact it was more like 200.

When we arrived the first thing we saw was about 50 boys aged 15 or 16 – faces looking up at us somewhere between friendly and scared.

We had brought a well packed van so we started by giving out goodie bags containing every day essentials – underwear and socks, toothbrushes and spray deodorant, dried fruit and nuts, tee shirts and hats. As we did this more and more people turned up. Older than the boys but only in their twenties. That still feels young to me.

When the bags ran out we started distributing the other things we had brought: 40 sleeping bags, 40 pairs of waterproof walking boots, 40 winter coats, 40 pairs of joggers, 20 bivvy bags, 40 power packs. Not enough to give everything to everyone, but every person got two things each – pretty good, but not enough.

I am so glad we did it. Some local French people came to talk to us. They said this was a relatively new development in their town. They bring food and water as much as they can but they just don’t have clothes and sleeping bags. They want to help but there are others who don’t like the refugees. The same as everywhere.

The refugees told us that the day before the police came in the woods and took all their belongings. It did not sound violent. It sounded like the police were following orders. While we were distributing some police arrived and asked who we were and what we were doing. They were friendly and polite. I wonder how long that will last.

When it was time to go a young boy came to talk to me. He said – Excuse me madam. Can you take me with you to somewhere else? I don’t like it here. We sleep in the woods and the police take our stuff.

I put my arm round his shoulder and said – I’m so sorry. The other places we go (Calais and Paris) the police take your stuff but they hit you and spray you will tear gas as well. In Brussels they deport people back to Sudan. I think you should stay here.

What a sad thing to tell a child