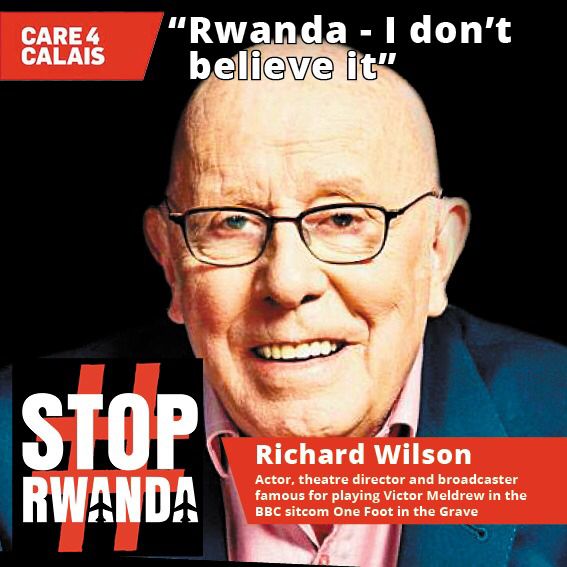 Richard will most likely be known to you as the arch-grump Victor Meldrew in One Foot In The Grave, but he is of course one of our most distinguished comic actors, and has appeared in dozens of well-loved films, theatrical productions and TV shows including A Passage To India, Merlin and Dr Who. He also well known for speaking out for the disadvantaged, and has long campaigned for gay rights, and for the Labour Party.

Little surprise, then, to find him speaking out against the Government’s callous forced removal of refugees to Rwanda. Indeed he told us he was so appalled when he first heard about the plans that all he could do was exasperatedly exclaim “I don’t belieeeeve it!”

1. Buy a #StopRwanda t shirt, take a photo, post it on socials, wear it out and about, talk about it and tag us @care4calais => https://bit.ly/RWDtee

2. Download or make a #StopRwanda card and take picture of yourself and/or your friends holding it. Post the pic on your social channels and tag us @care4calais => bit.ly/RWDbanner

2. Download the icon and save it as your profile picture on social media => bit.ly/RWDicon

For more info and details of other actions you can take go to care4calais.org/stop-rwanda/