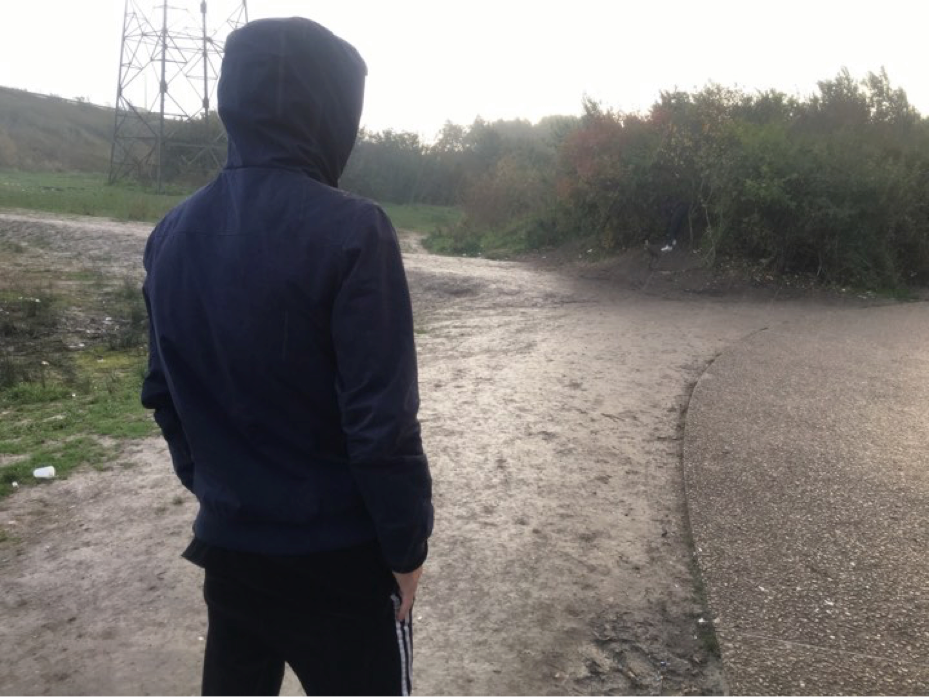 Safi is 16 years old and from Afghanistan. This image captures Safi’s current reality, a despairing reality for hundreds of unaccompanied child refugees trapped in Northern France. That is the final and dispiriting obstacle in Safi’s journey, this is the Grande- Synthe refugee camp located in Dunkerque, and it is home to an estimated two hundred refugees.

Safi was born in Northern- Eastern Afghanistan and recalls happy memories as “everything was good…before the Taliban came”. Predominantly, Safi treasures his time at school, where he enjoyed studying the sciences and has warm and fond memories of playing cricket, a sport which he aspires to resume when in England.

The control of his home town by the Taliban had a devastating impact on Safi and his family, shown explicitly as he disclosed his fear of the Taliban and further, the devastating killings of his parents in allied bombing. This is a reality hard to face for any person, and to be a thirteen-year-old boy, as Safi was at the time of the deaths of his parents, is conclusively unimaginable.

Consequently, at the age of thirteen, Safi was orphaned, with one sole family member alive, his brother who currently lives in London. Understandably it is for this reason, the safety, familiarity and security of family that Safi dreams of reunification with his only family, with his brother. Alongside this imperative is his genuine admiration for England, established in his certainty that “England is good for the future… for sleep… and work”, as well as education.

Safi’s journey to France was perilous and exhausting and included travelling across Iran, Turkey and Bulgaria. Safi recalls specifically how fearsome Bulgaria was, stating that this part of his journey was particularly frightening. Even after this long, tireless and terrifying lone journey, Safi, like hundreds of other unaccompanied child refugees are vulnerable to further danger, this time in the form of the Compagnies Républicaines de Sécurité (CRS).

Systematic police brutality towards refugees in Northern France, including children is now well documented, such brutality includes pepper spraying, beatings and psychological intimidation. This brutality, explicitly the use of pepper spray, is personally reaffirmed by Safi. Alongside this brutality is the ongoing, daily psychological damage inflicted upon these children. Uncertainty and loneliness is expressed by Safi himself, “I have nothing… tonight I sleep here (pointing to the damp, muddy and cold surroundings captured in the image above) … I don’t have no friends here”.

Like hundreds of other unaccompanied minors, Safi’s current situation here in Northern France is bleak but his future does not have to be. Safi is a sixteen-year-old boy from Afghanistan who has witnessed the murder of his parents, travelled alone to reach France and has been stopped at the last barrier in his way to reunification with his brother in England.

Despite this reality, Safi still has hope, along with a genuine and justifiable longing for England, a longing shared by hundreds of unaccompanied children here in France and their family members in the UK, a longing which must be supported.

To volunteer or donate see www.care4calais.org