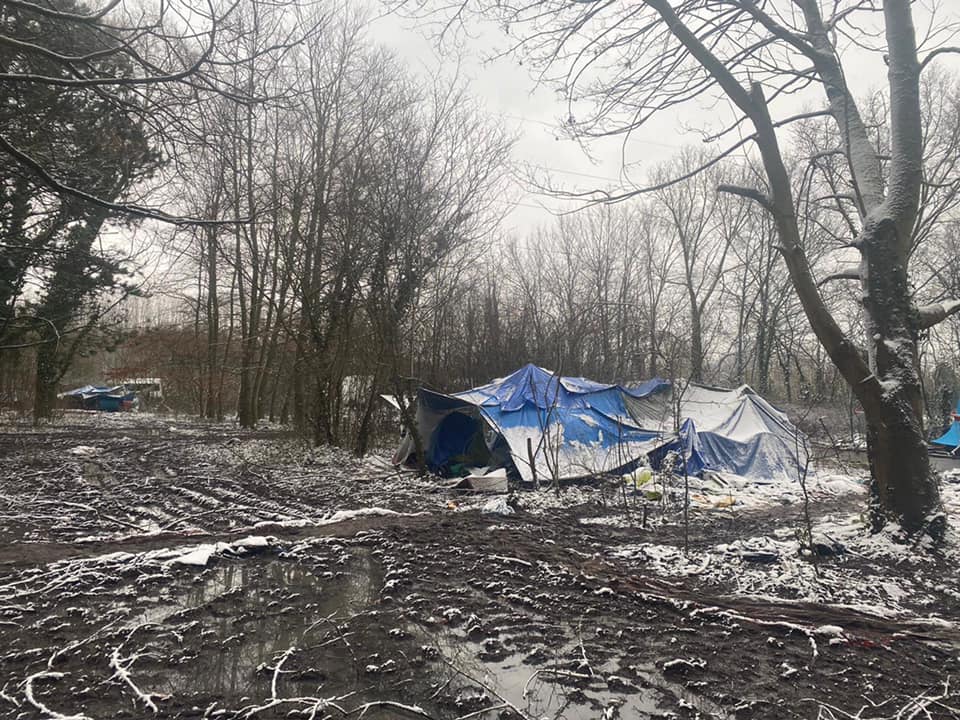 ‘Wills and I were in Dunkirk this week with Care4Calais. It was absolutely freezing, which wasn’t helped by the constant snow and already waterlogged ground.

I was asked by a refugee to take photos of the conditions. He wants you to know how people are being made to live because he believes “the UK is good”. He hopes you will help. As seems to be the pattern, amongst all the sadness and cold there is humour and warmth. Men help each other to set up shelters, laughing and singing in the bleakest conditions.

I spoke to a young man who is a lawyer. He showed me pictures of his life before, appearing desperate to make me understand what he had to give up and who he was before becoming a refugee. Because he is Kurdish, he was forced to leave a home and life he loved. His wife and baby are already in the UK, but he is struggling to get there and he misses them both desperately. He was such a lovely young person, and it broke my heart that all I could do was listen to his stories and wish him well.

There were children at the site – although they were staying in a hotel, they came everyday for food. An eleven year old child told me the food in the hotel was “not good”, and she was looking for vitamins and medicine from the first aid officer.

Lucy* was a small girl, making her appear much younger than her eleven years. I gave her an umbrella while she was waiting in a queue for support. She came and stood next to me so that we could share its shelter. We spoke for a while, as her dad stood nearby. Lucy was staying in the hotel with her mum, dad and little sister – her mum and sister were too unwell to come to the site. She asked me if I had any makeup for her mum.

Back home, I work as a mental health nurse. I often hear women share “I feel a bit better today; I got up and put makeup on for the first time in ages”. Her request brought this to mind and I wondered how Lucy’s mum was getting on both physically and mentally.

This little girl was standing in the cold, waiting for medicine for her family, thinking about her mum. People are so good. Too good for this. At every site I’ve attended, people have shared everything – their stories, their food and shelter. In the short time I’ve been in Calais one thought keeps whirling around in my mind.

How have we allowed refugees, people who are fleeing from war, dangerous political regimes, torture, to become such a maligned group in the UK? I urge everyone to visit the Care4Calais Facebook page, and also to read the article in the link below, for a better understanding of the conditions these incredibly vulnerable people are experiencing in Calais. The cruelest irony is that some of the worst indignities are heavily funded by the UK government.’ – Ruth, Care4Calais volunteer