Inspiration for 2023 and beyond! 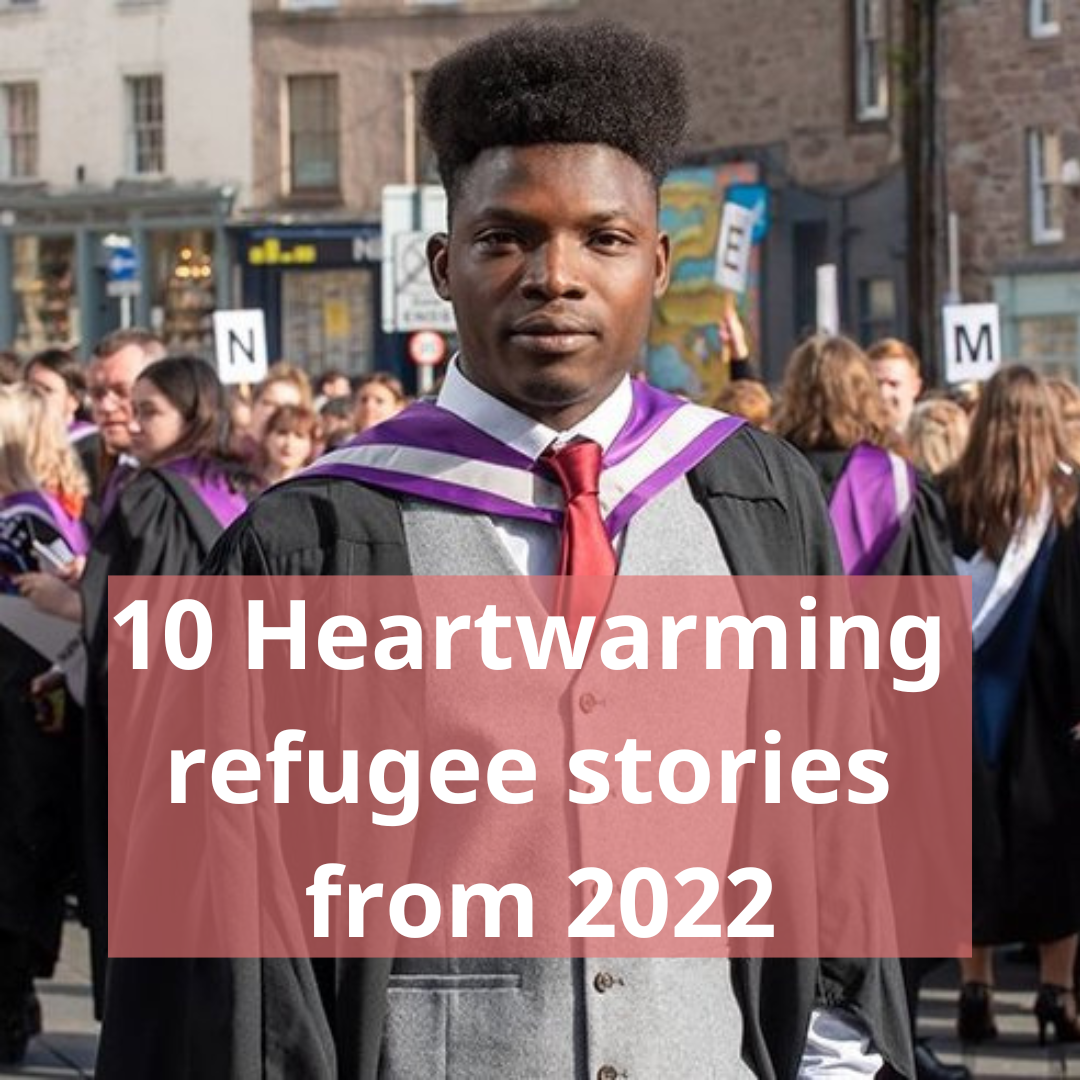 It has been a tough year for anyone who cares about refugees, but there are so many good, compassionate people out here who support them, and make good news. We can forget to pause and reflect on the success stories and good news.

So here to consider in this quiet time between Christmas and the New Year, are ten inspiring refugee stories from 2022 to warm your heart.

1 Omar wins Student of the Year!
Omar, who we first met in Calais two years ago, had no formal schooling. He couldn’t read or write, let alone use a PC, and yet he was determined to make something of his life when he reached the UK.

This autumn he has graduated from his course at Perth College UHI, part of the University of the Highlands and Islands. He also did his expedition for his Duke of Edinburgh Award, was given the college’s Community and Citizenship Award, and to cap everything, he was named as the college’s Student of the Year.

Not bad for a young, unaccompanied asylum seeker who started his studies speaking little English. His qualification in New Skills is designed to help him continue with more advanced studies, so he’s now well on the way to making a new life.

His lecturer Caroline said “Omar Nomoko is one of the friendliest and most optimistic students I have had the privilege to teach. He is an inspiration to all.”

2 A picture of refugees and C4C volunteers is chosen to represent what’s great about Britain
In May this photograph of refugees and Care4Calais volunteers was chosen for a government ad campaign showing what makes Britain Great – and it’s still prominently displayed at Heathrow Airport.

The picture was taken by photographer Frederic Aranda, who works with a group based at an East London hotel. Frederic loves the way volunteers and refugees come together as a big family, and tried to get that across in his pictures. He certainly succeeded in this one, shot in London’s Smithfield market.

Most people shown were waiting on asylum applications when it was taken, and its use at Heathrow is wonderful statement that refugees are welcome here. Frederic, by the way, has donated his prize money to each of the refugees in the picture.

3 Asylum Seekers turn chefs at In The Mix
In The Mix is a brilliant partnership between refugees and volunteers in North London – a weekly gathering at a community kitchen where asylum seekers work as head chefs, and invite up to 50 local people to join them for dinner .
The food is delicious, the atmosphere party-like, and dozens of new friendships have been formed by people AS and local, all sharing the same neighbourhood. In The Mix has shown that £80 and a huge amount of energy, willingness and comradeship can feed and entertain 50 people with delicious Sudanese, Eritrean, Iranian, Kurdish, El Salvadorian food each week. As Matilda, one of the organisers says, it’s a big “BOO in the face to those who say ‘migrants come over seeking benefits’.”

4 An amazing theatre show by refugees sells out
In April the internationally-renowned choreographer Luca Silvestrini produced an incredible, sold-out show about refugees at London’s The Place theatre. Titled There and Here, it wasn’t just about refugees; it was made with performers and non-performers drawn from London’s refugee community. One of the stars was an asylum-seeking Iranian artist and musician called Ramin, whom we support in East London.

There and Here ended with the audience being invited to dance with the refugee performers – a truly moving experience for anyone who was there, and scarcely a dry eye left on the stage!

5 Fifteen-year-old Ryan wins an award for his community work
Ryan, a 15-year-old refugee, has lived in a hotel near Stansted Airport with his mum, dad and two brothers for over a year as they wait for their asylum claims to be processed. His local council runs life-skills sessions for refugee children aged 11-17, Ryan not only attends – he encourages people to get involved, organises the other children, and makes sure sure they attend weekly sessions. He’s become such a brilliant group leader that in November the council recognised him with a special achievement award.

“I was really proud of myself because I was able to bring a smile to my parents,” he said humbly. We were really proud to know Ryan too. He shows how much refugees have to offer if they’re just given the chance.

The Wealth of Refugees was widely acclaimed in academic circles for showing with evidence that refugees can and have benefitted the countries they move to. The key, Alexander argues, is including refugees in economies – in other words, allowing them to work, instead of refusing permission and then complaining they’re a drain on the economy.

The book argues that the key lies in unlocking the potential contributions of refugees themselves. Refugees bring skills, talents, and aspirations and can be a benefit rather than a burden to receiving societies. Realizing this potential relies upon moving beyond a purely humanitarian focus to fully include refugees in host-country economies, build economic opportunities in refugee-hosting regions, and navigate the ambiguous politics of refugee protection.

7 Refugees at Napier rebuild a beautiful garden
Earlier this year asylum seekers housed in the notorious Napier Barracks in Folkestone began meeting with a group of Care4Calais volunteers in a nearby scout hut. Noting that the garden of the hut was a bit neglected, some of them began tidying it up during meetings; a few weeks later, they have worked together to completely re-landscape and plant it up. They’ve even installed fire pit, impressing the group leaders with the speed and quality of the work!

One of the regulars was a farmer in Eritrea and said he finds it very relaxing to have some time away from the camp, using his skills to benefit the local community. It was great to see people who are housed in such a harsh and stultifying environment like Napier finding enjoyment working with the earth and plants like this.

8 A young Sudanese street artist is brightening up Britain
Aziz, a young street artist from Sudan, came from a poor background, but he was talented and wanted to make something of his life. He had a loving brother who wanted to support his ambitions, and so helped pay for him to go to university. Tragically, a few years ago the Janjaweed raided Aziz’s village and killed his brother, leaving him little choice but to flee. After surviving imprisonment, kidnapping and forced Labour in Libya he finally made it to the UK in August 2021. He had his interview and is waiting now, and he has been continuing with his art. Most recently he attempted to do snow art in a local park but had to make it quick as his fingers froze! Aziz maintains a positive mindset by volunteering his time and learning his craft. He believes that one day he will be ablel to sell it an earn a living with his creativity in the UK. “If I’m successful,” he says, “I want to buy my mum a house in Khartoum where she will be safe.”

9 Luol Deng offers hope to South Sudan
There’s a nasty idea underlying the argument of some racist critics of refugees. “Their” countries are always will be s***holes, as Donald Trump put it. Their people are bad and beyond redemption. There’s nothing we can do; best just leave them to fester.

It’s nonsense, but it’s good to see someone comprehensively disproving it, and that’s what’s happening in South Sudan. South Sudan has many problems – even though, as we know, most South Sudanese people are kind, compassionate and thoughtful.

Luol Deng is a hugely successful basketball player who was a South Sudanese refugee to the UK, and who represented Great Britain during the opening ceremony of the 2012 London Games. Now president of the Republic of South Sudan Basketball Federation, and on its coaching staff, Luol has overseen something incredible: at the time of writing, South Sudan is one win away from qualifying for the 2023 FIBA World Cup.

“I want to make it the Olympics and have our South Sudan flag at the opening ceremony like I did with the Great Britain team” the ex-refugee has said. We’re behind all of you all way, Luol.

10 Thousands mobilise to #StopRwanda
The Rwanda policy split our country in a way reminiscent of Brexit. Feelings have run high, and it has taken courage to speak out. But speak out people did – in their thousands. Right from when this heinous policy was announced, you have marched, attended rallies, and stood up with our #StopRwanda campaign at events all around the UK (including the Notting Hill Carnival – see picture). Trade unionists, MPs, councillors, celebrities, activists and others of all ages and from all walks of life have let it be known that contrary to this government’s rhetoric, he majority of people do NOT support the idea of sending people who need our help to a country where their safety can’t be guaranteed.

The High Court may have ruled the policy lawful for now, but with this level of opposition, it cannot succeed. We will not let it.

Give up now? Nah.

As far as we’re concerned, the fight has barely started.