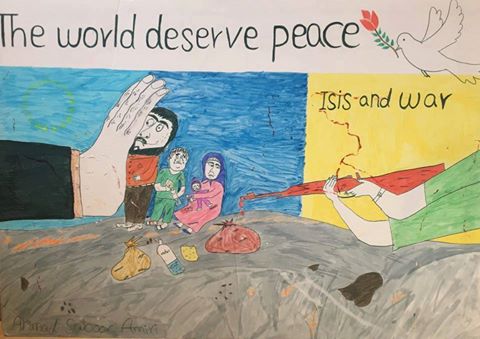 ‘The Calais Jungle and the volunteers saved me, without them I would have given up, life was too hard, after seven years of travelling I was finished, I had 30 euros in my pocket and nowhere left to go.

But last year they finally said Eritrea was not safe and maybe now I can get asylum. I want to go to UK, the people there are kind and they help my people, maybe there I will find peace.’

The Eritreans we meet are extraordinarily resilient, they have to be. Young people are conscripted into a brutal army at 15 often with no chance of leaving. Many are sent away from home at 13, before the soldiers come for them. Parents want their children to live, so they make this sacrifice, knowing they may never see them again.

Orphaned during the war of succession and with no schooling, Tesafe was perfect canon fodder and was taken by the army at 15. After five years of fighting, Tesafe and 15 others escaped Eritrea, they walked for six days across Sudanese deserts and another 21 through the blistering sands of the Sahara. If they had been caught they would have been shot on sight.

Tesafe, like many Eritreans, is Christian. With a tattooed crucifix on his neck he is a target for ISIS and indeed on reaching Libya they ran into a group of Daesh. They didn’t stand a chance, slaughtered by automatic weapons, the street ran red with their blood. Knifed in the head and with a deep, jagged wound across his wrist, Tesafe lay dying, unconscious and bleeding. Left for dead by Daesh he was rescued by a fellow refugee and led stumbling and bleeding seven miles through the twisting back streets to safety. Left in a tiny hut with an old man, exhausted, Tesafe lapsed in and out of consciousness loosing blood. Daesh came looking and he had to leave. Weak and delirious he stumbled into a group of Libyan soldiers, but they took care of him and the hospital stitched him back together. For five months he stayed, the soldiers had discovered his knowledge of guns and he worked there, fixing guns as slave labour, but he recovered, physically at least.

But life in Libya as a Christian was dangerous and Tesafe, a constant target for abuse and violence, spent time in atrocious jails and prisons. On the run again, Tesafe made it to Italy. One hundred people in a rubber dinghy, far from shore they had lost the engine, for 48 hours they drifted. Thirst became the enemy, salt water is a killer, malnourished and exhausted two succumbed to its allure. The water caused violent, bloody sickness and Tesafe watched both die.

Rescued by MSF, the survivors had arrived six days later where their finger prints were taken. More time in prison and on the run again, there is no work in Italy, no way to live, just fear of deportation and detention. Tesafe made it to Calais where volunteers found him, exhausted, traumatised and starving. Over the next seven months they gave him hope for the future and a will to live. But Tesafe’s story does not finish here, being allowed to stay in Europe may be the hardest fight of his life.