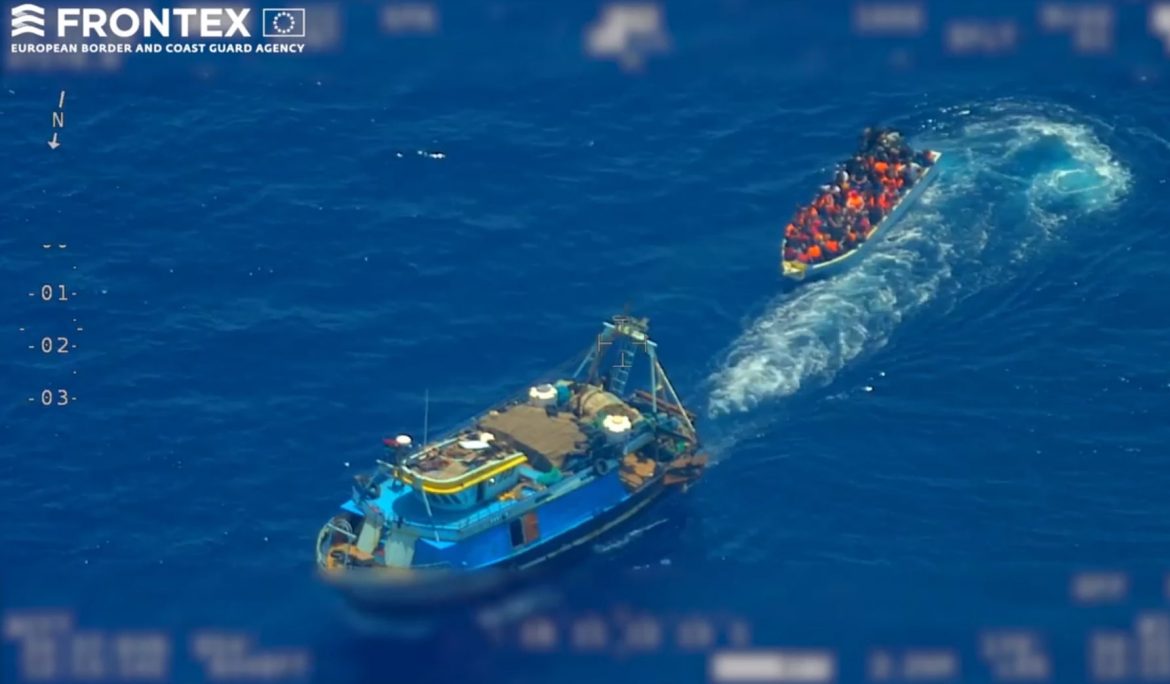 “If I had ignored those cries for help, I wouldn’t have had the courage to face the sea again.”

This is what Sicilian fisherman Carlo Giarratano said regarding his decision to defy the Italian government’s “security decree” which threatens those who bring rescued migrants to Italy with fines or imprisonment. His story reflects uneasy legal tension at the border of “Fortress Europe”. International law obliges the master of a ship at sea to provide assistance to people in distress, “regardless of the nationality or status of such persons”. At the same time many European countries and the EU itself are trying to restrict such activities, even as the death toll in the Mediterranean rises.

The European Border and Coast Guard Agency, Frontex, appears to have come up with an ingenious solution: use drones. The legal obligation to aid a vessel in distress does not apply to an unmanned aerial vehicle, or UAV. You can avoid the politically fraught argument about who should take care of rescued migrants if you never rescue them in the first place. This is part of a long trend in policy designed to ensure that migrants are unable to cross the Mediterranean. If we are obliged to rescue those who ask us for help, the solution seems to be to ensure we cannot hear their request.

Jean-Claude Juncker says that European border policies are designed to “break the business model of smugglers” – because in the self-serving morality of European border policy if there were no traffickers there would be no migrants. But traffickers do not manufacture migrants in their garages. If the official routes are blocked, people will seek out unofficial routes. The demand for smugglers is increased, not stopped, by making migration more difficult. Rather than breaking their business model, these policies create it.

As a fig leaf, so the EU can claim that it does not simply leave refugees to drown, we provide support for the Libyan coastguard to intercept boats attempting the crossing and return them to a network of detention camps in Libya. But the Global Detention Project report on conditions in these camps says: “Those detained often face severe abuses, including rape and torture, extortion, forced labour, slavery, dire living conditions, and extra-judicial execution.” Human Rights Watch – in a report entitled No Escape from Hell – described conditions of overcrowding and malnutrition, and allegations of children being beaten by guards.

The Irish Times has reported accusations that the militias associated with the UN-recognised Libyan Government of National Accord (GNA) are storing munitions in these camps, using refugees as “human shields”. Almost inevitably, on 3 July at least 53 refugees are known to have been killed in an attack by the rebel Libyan National Army on the Tajoura detention camp outside Tripoli. According to testimony reported by the Associated Press, migrants at Tajoura were conscripted into cleaning weapons belonging to GNA-associated militias which were stored at the camp. Eyewitness accounts of the attack reported by the UN suggest that guards opened fire on people trying to flee.

When we discuss immigration in the west, we tend to focus on “the impact on communities” caused by flows of new people from one place to another. We discuss whether migrants are a net positive to the economy or a drain on scarce resources. Rarely do we look at the stark, mechanical realities of what border control looks like when it is translated into guns and barbed wire. We tell ourselves the costs all run one way – in our narratives border controls are all free, it is only letting migrants in that is expensive. But there are always costs to be paid: not only the ever-climbing death tolls or the swelling, multibillion budgets of our border agencies, but the moral and social costs we extract from ourselves.

If we do not share resources with others, we actively choose the drownings, the detention camps

The obsession with border security is running up against some of the oldest obligations western societies have. Look after the vulnerable, do unto others as we would have them do unto us, help those we can. For many whose work takes them to sea, it is not just the legal obligation to provide aid that compels them to rescue migrants, but also the more basic moral imperative. “This is what we sailors do,” Giarratano told the Guardian. “If there are people in danger at sea, we save them.”

But our governments have decided it is not what Europeans do. In perverse defiance of ingrained moral instincts thousands of years old, in modern Europe a sailor who rescues a drowning refugee must be punished.

Breaking down these human webs of mutual obligation comes with a cost: social incohesion and friction. That is an irony in itself given that these things are among the top of our purported concerns when it comes to migration. Even as the EU pushes one edge of the border back into the deserts of North Africa, trying to keep the human bodies of refugees far enough away that we do not have to see them up close, so the other edge pushes backwards towards us. Europe becomes a “hostile environment,” and therefore we become a hostile people.

We recruit ourselves as border guards of the interior. Landlords, nurses, teachers, managers – any interaction with society needs to be policed. Our “everyday bordering” regime creates “suspect communities” within our society – those whose very existence is cause for suspicion, and on whom the authorities can be called at any time “just to make sure”. The border is not just a system for keeping aliens out of our society, but for permanently marking people as alien within it and giving official sanction to prejudice, ensuring that “integration” – the holy grail of liberal immigration discourse – always remains illusory and unattainable, a cruel joke played on those for ever racialised as foreign and suspect. Our whole society becomes servant to the insatiable border until it is defined by the capacity to turn people away.

Even as the visible tragedies and deaths are reported on, the news shies away from making the link with the way some people’s “genuine concerns” are amplified and turned into an unassailable “common sense”. The trade-offs of border policy are not made explicit. That allows us to look away, not because we are cruel, but because we cannot bear to see what we are doing. There are some for whom, as Adam Serwer said in the Atlantic, “The Cruelty Is the Point”. We may not all be these people, but we all live in their world, where we watch people drown from unmanned drones, while the state punishes those who try to save them.

Too many of us believe in a myth of a border that can be humane because it scares us to face up to the bloody reality of everyday border enforcement. And yet, if it were possible, would we not have figured out how to do it by now? That we haven’t means we should consider the possibility that we cannot, which leads us to a stark moral choice for the future.

There will only be an increase in refugees from this point. Climate change will see to that. The choice not to turn them away will not be cost-free; there is no costless way to share resources with others. But if we do not, we actively choose the drownings, the detention camps, the funnelling of these people into a life of slave labour in war zones. We choose the hostile environment. We choose to “preserve our way of life” only by living alongside a growing population of stateless refugees in their foil tents and sweltering warehouses, exhausted to the point of hopelessness.

Is there a cost we will finally consider too high to pay? What does it say about us that, so far, it seems there is not?