Val and Malc: Behind the frontline 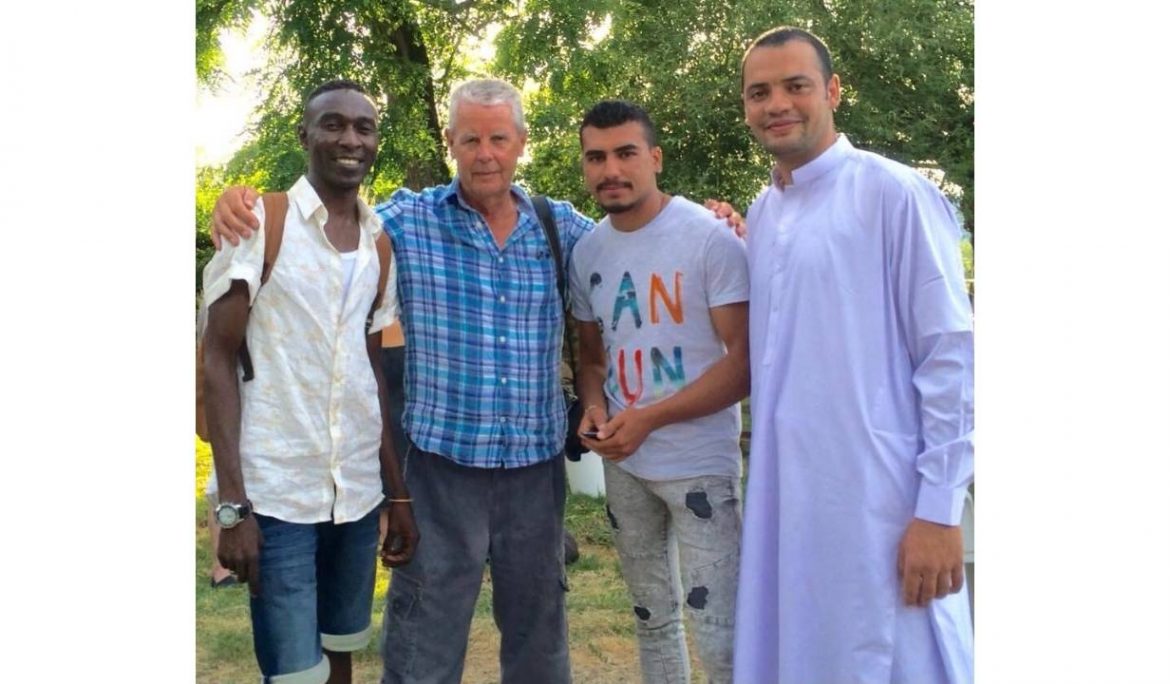 When the refugee crisis began in earnest in 2015, my husband Malc and I felt we had to do something.

We had been so lucky in life. We were privileged and had a lovely house in Varen in south west France, having moved there from the UK. It was only right that we share some of our good fortune, but what to do? I was nearly 70, and too old to be carrying boxes around a warehouse in Calais.

We decided to ask friends and neighbours for donations of clothing, and as word spread this became truckloads of aid going north to Care4Calais.

Then in 2016 the police demolished the Jungle in Calais, and 17 young men were bussed out to government holding facilities our area.

The boys terrified when they arrived, with no idea where they were, or what would happen to them. They thought they might be marched off to jail when they got off the bus, or even shot.

I could see they needed support, and that realisation began was the next phase of our volunteering journey.

Malc and I befriended the boys, and took them out for visits, shopping, and fun. We had a lovely swimming pool at the house, so we’d bring them home for the day to swim and eat. They particularly loved to play cricket with Malc.

They came to realise not all people were anti-refugee, and there were many people in France who welcomed refugees to the country. They began to feel safe.

As time passed, more and more men were sent down to our area, and we kept on making friends. Over the years we had about 100 refugees from many different countries through our door.

Eventually the boys began to get status as refugees. Then came houses and flats that we needed to furnish.

Then wives and babies started to arrive.

By then I had built up an amazing network of volunteers and friends, and they all rushed to meet the call. In fact, we were given so much stuff we couldn’t use it all.

But then I had an idea, and so began my third volunteer phase – an association, Mains Tendue [Outstretched Arms] 82. Mains Tendue was a second-hand shop that sold the goods we couldn’t use to fund things that refugees needed – train tickets, petrol, tracksuits and the like. In the last year I think we made £25,000 to fund the boy’s journeys.

Very sadly, my wonderful husband Malc passed away about 18 months ago, and I moved out of our big house into the village. Because of the pandemic I have not seen as much of the boys as I would have liked, although we have had some sneaky visits and, of course, I keep up to date with their news on social media.

I guess the last phase of my French journey came as I began to help the boys,now settled, to get jobs and move on with their lives. Once again, my amazing network helped so many get into work, and some are doing really well. I’m so proud of Bashir, who I’m sure will be one of France’s top restaurateurs one day. He loved to cook for us all after a day’s activities, and has managed to get a place to train as a chef.

We didn’t get many women, but around the time Malc died a big group of Yazidi women who had been raped and tortured were sent. Their stories were just horrible and heart wrenching.

They were reluctant to engage with us and very quiet, but once they found out my husband had died there was a connection. They said, “Our husbands are dead, your husband is dead, we understand your pain and you feel ours.” For a short time they were a joy to know, but they were soon moved on.

I’m 75 now, and I’ve decided to move back to the UK to be near my daughter Sam and her lovely girls. Sam has become involved in the refugee cause now that there is so much need and so much to do in the UK. She has joined one of the UK Care4Calais groups.

It is not an easy decision for a small business owner to advertise and promote the volunteer cause as she does, and I feel so very proud of her.

I’m now in the next stage of my own volunteer journey in my new home in Henley. I’ve no idea yet how it will turn out, but there is still so much I feel I can do and be involved in to help these young people find a new life.

Join me, email [email protected] to find out how to get started; all you need is love

And after Covid I really hope my “family” will visit me here in the UK. I will miss them dreadfully in the meantime.