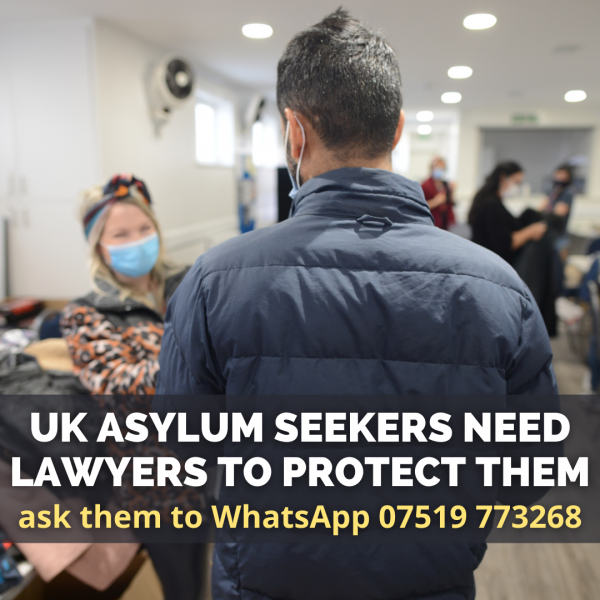 On Monday night I got the best call of my entire life. The last of the 11 guys who were going to be deported on a charter flight scheduled for yesterday had been released from detention. I couldn’t believe it.

In just a week, with the help of our incredible friends at Duncan Lewis Solicitors and Gatwick Detainees Welfare Group, we succeeded in stopping 11 vulnerable people from being unfairly deported despite having been victims of trafficking, exploitation and having acute mental health problems. Let me tell you: there is no better feeling than that.

This all started when a friend of mine was taken to the Brook House detention centre last week. Thankfully he had written down my number beforehand, so although his mobile phone was confiscated he could still contact me with the basic phone they are given. Word got around that we were putting him in touch with a lawyer and before we knew it, ten others who had no legal representation were asking us for help too.

Speaking to refugees stuck in detention is like speaking to people on death row. They are desperately terrified and panicked about being sent back to another country after the horrendous danger they put themselves through to get to the UK.

As a volunteer in the Care4Calais Access Team trying to match up refugees with lawyers, you are always racing against time – and the clock on removals ticks very fast. On this occasion we only had a week to stop 11 people from being deported before it was too late.

And we did it. They were all released separately a few days or hours before the flight. The first one of them unexpectedly called me on WhatsApp at the weekend. I was confused because I thought he was still detained and I knew he didn’t have access to WhatsApp at Brook House. That’s when he told me the good news: thanks to our help, he was safe and on a bus to Liverpool. He said to me that if I ever needed anything in life, all I had to do was ask him. I think I danced happily around my house for a solid 10 minutes after getting that first call!

Most of them were Sudanese and a few were from Eritrea and Iraq – some of the most dangerous countries in the world. The more we spoke to them, the more we realised that almost all had been victims of terrible human rights abuses during their journey to the UK.

The problem is that many don’t know they should get legal representation as soon as they arrive here. None of the 11 detained guys we helped had a lawyer before we intervened.

Lawyers just aren’t the first thing on their mind when they arrive in the UK. All people can think about is the fact that they made it – that they’re finally in the safe country they wanted to be in. So it’s incredibly important that they’re told to get in touch with us as soon as possible. We can then match them up with legal aid and look after them during this process.

If you know an asylum seeker who recently arrived in the UK, please tell them to contact us. Our team of incredible volunteers will do our best to find them legal representation. We know all too well the difference this can make to someone’s life.