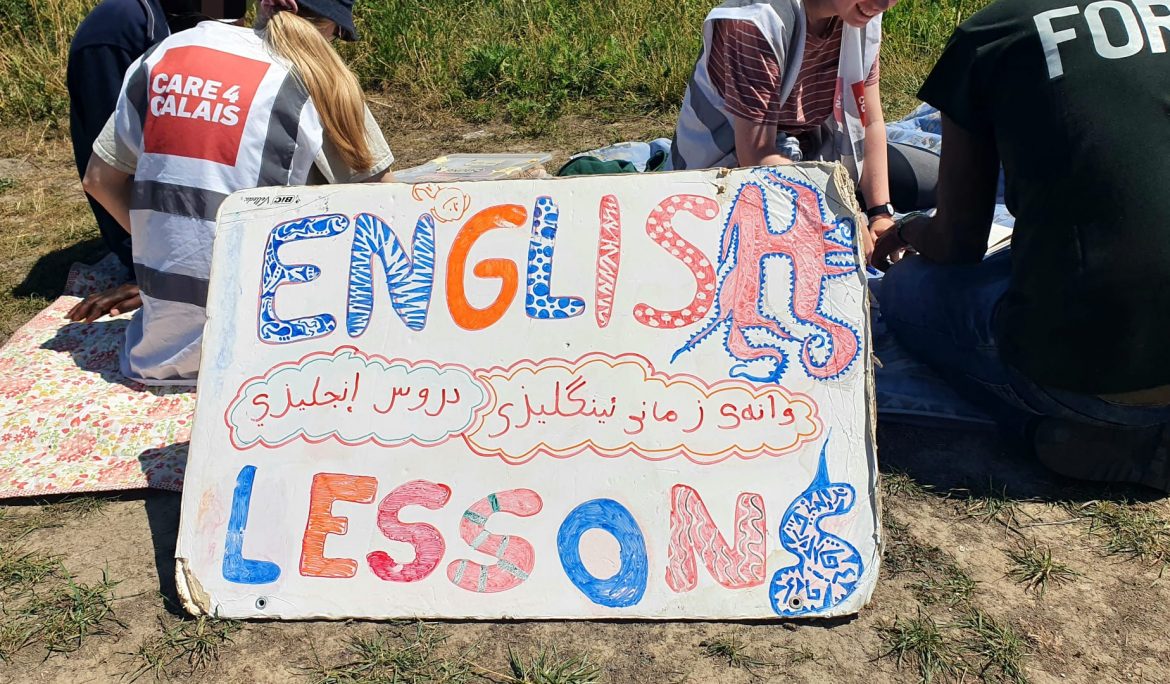 Over the many years I’ve been helping refugees in Calais I’ve seen a lot of awful, heartbreaking scenes. But I’ve never never been left unable to speak to anyone in the way I was today.

I was at a big distribution. After we had given power banks and shoes to more than 300 people, we provided our usual services like haircuts, games and books. And as I wandered among the refugees and volunteers in the hot, dusty scrubland, I saw a small group young men – just boys, really – gathered around a table where some of our volunteers were giving English lessons.

“A. B. C. D…” the boys were enthusiastically reading the alphabet aloud together, breaking out in smiles as they got these strange new sounds and letters right. You could see the delight on their innocent, hopeful faces, and you knew what it really meant. For them, their ability to learn this language betokened the possibility of finding safety and making a new life in the UK.

These were teenage boys whose painful pasts were made bearable by a belief in a better a future; a future in a Britain where people would give them a chance to show what they could and how they could contribute.

“E.F.G…” In reality, they were risking their lives to reach a country where they might very well be thrown into a detention centre, and then physically forced onto to plane that would fly them to Rwanda. To a country they didn’t know, and whose human rights record suggests they will not be treated well.

To know this, and to watch them there, eagerly learning English was hard to bear. In fact for a while it was impossible. I halted and felt tears coming and knew that I couldn’t let them see me crying because then I might have too explain what I knew. So I turned, with the sound of the alphabet fading in the dust behind me I walked away. Past people playing games, people having their hair cut, people sewing their clothes, people smiling and laughing; ordinary people, who wanted only to get on with their lives in safety.

I had an awful vision that in a few weeks these very same young boys could be talking to me on the phone from detention centres, as so many others have in recent weeks. Terrified, weeping, begging for help, planning to kill themselves. Even if that didn’t happen, in the next few months the Nationality and Borders Bill would come into effect, so that the best they could hope for was temporary protection – a wily, weasel phrase meaning that they could never ever feel really safe. They will be worn down and finally broken by a system running on worry and fear.

For many, the UK has been their final hope. After the Nationality and Borders Bill there will be no safety left for them anywhere in the world.

Afterwards, back at the warehouse among our amazing volunteers I rallied. I think about all the people who want to come and help refugees here, and I just cannot believe that most people in the UK want this horror enacted in their name. We have to keep fighting. Supporting refugees, and supporting each other. If it’s a long haul, then so be it.

And instead of that despicable bill’s A to Z of cruelty, let’s make plans for a land where boys like those I saw today can come and use their English to talk safely and freely and without fear.

We are challenging the government’s Rwanda policy in court in July, and we need your help more than ever. To find out how to help go to: