What I learned photographing refugees in Calais 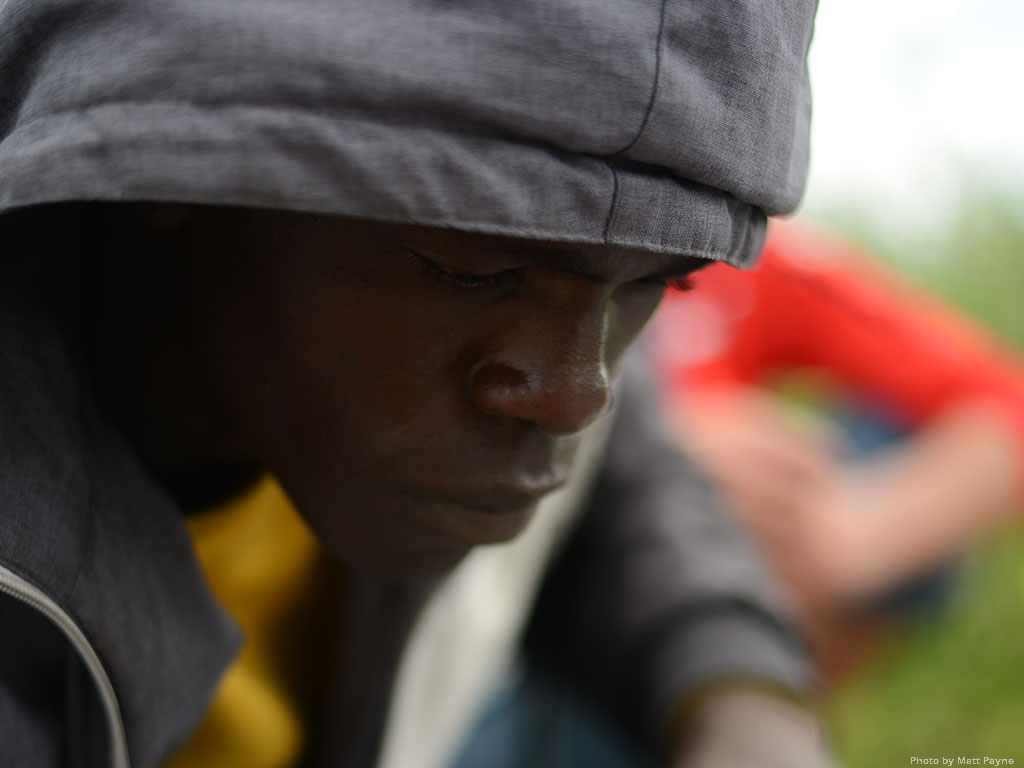 Photographer and Care4Calais volunteer Matt Payne talks about his experiences documenting life in the refugee camps of Calais (Instagram: @imagesbymattpayne).

Photographs are everywhere. Most of us take them and all of us expect to see them in one form or another. They represent an element of normality. For citizens that live within their chosen state and refugees alike, they can be a welcome distraction, a method of capturing moments of beauty or a way of reminding us about a time and place. I’ve found in my short time around the refugee camps in Calais that perhaps, solely for refugees, they can also be a way in which to make light in the midst of a dire situation.

What’s in a photograph?

For me, photographing refugees in Calais has produced a myriad of reactions. Some people were very much against the idea of making a portrait, often fleeing from regimes that use surveillance to find and persecute them. Other people want to pose, smiling and playing and would often ask for the photos to be sent to them. A momento perhaps. A way of consolidating what they’re doing at this point in their lives (or rather what’s being done to them). Maybe a way to remember who they’re with at this time? Who were those friends, those comrades, those shelters, those shoulders. Perhaps, to those willing, the photographs represented hope. Hope that they’ll indeed have a far-flung future so detached from their current dystopia, that they’ll be enabled enough to look back at this time without sadness.

Questioning my own expectations

I’m ashamed to say, some of the people I met responded to my camera in ways I honestly didn’t expect, reacting as my friends and family at home would. Silly faces, hand gestures, funny postures.. It made me question my own expectations and the reasons behind them. Of course people made silly faces! They’re regular people that are akin to normality, just like those people at home. My mind had a narrative that was refreshingly unfulfilled. It was quietly humbling.

Within certain refugee camps, the camera acted as an icebreaker. Something to talk about and fixate upon. It allowed me to have really good conversations as I learned a lot about the backgrounds, skills, plans and interests of people, encountering those tiny idiosyncrasies that can make a person so personable.

Equally some people were very averse to being in front of the lens; a perfectly valid and understandable response. These boundaries should always be respected and acted as a reminder for me that behind the would-be smiles could be a situation these people were running from and in front the poses was a future that remains dangerously uncertain.

I feel blessed to have been afforded the opportunity to meet the people I did and blessed to have been allowed to take some people’s photographs and to attempt to document their experiences. But ultimately, I feel blessed to find myself in a situation where I’m not forced to become a refugee. If I was born a thousand miles in a different direction, my life could and probably would be very different. Is it luck? Or fate? Maybe actually ‘blessed’ by something omnipotent? The stark nature of being dealt a different hand. Simply, life isn’t fair.

However, a thing that united practically all the people I met was the smiles and the laughter. In those moments, those flashes of courage and resilience these people allowed me to see made them beyond ordinary. To me, they were elevated to the extraordinary. I was in awe of how people with so little had so much to give. And I knew that those flashes of resilience I witnessed weren’t flashes at all. They weren’t momentary. It was a fuel. It was in their bones. I saw it in a 17-year-old-boy from Niger who was optimistic and courteous as he held an ice pack to his knee that had been injured by police during a brutal eviction. I saw it in a group of Afghani teenagers, the youngest 15, that had walked through 11 countries in 12 months and wanted me to play cricket with them. I saw it as I sat on a small mound with an Eritrean man who smiled when he told me ‘hardships make you stronger. That’s life’.

The things no camera can capture

My time documenting was only a toe in dark water. A scratch on a truly grim surface. The journeys the majority of the refugees have endured, the things they’ve seen and the obstacles they continue to face can never really be understood. No story can ever be retold to its fullest extent. And no camera can capture those flashes in the dark. There are depths that simply can’t be descended to. In spite of this, I’m glad I came to Calais. I didn’t feel as though I did or could do much, but I’m glad that I met these people. If only to say: I see you.

To see more of Matt’s photography, visit his website or Instagram. Matt is engaged primarily with capturing moments that naturally reflect people in their environments, their relationships with each other and their wider roles and functions in a community. He is also intrigued by perception; how every depiction of an object or space can be altered radically and portrayed so differently after a slight change of angle or point-of-view, particularly from an aerial perspective.

All of the photos Matt took during his time in Calais were taken according to Care4Calais’ photography policy. Subjects gave express permission to be photographed, and for their photographs to be shared on social media.