Art and refugees in Calais 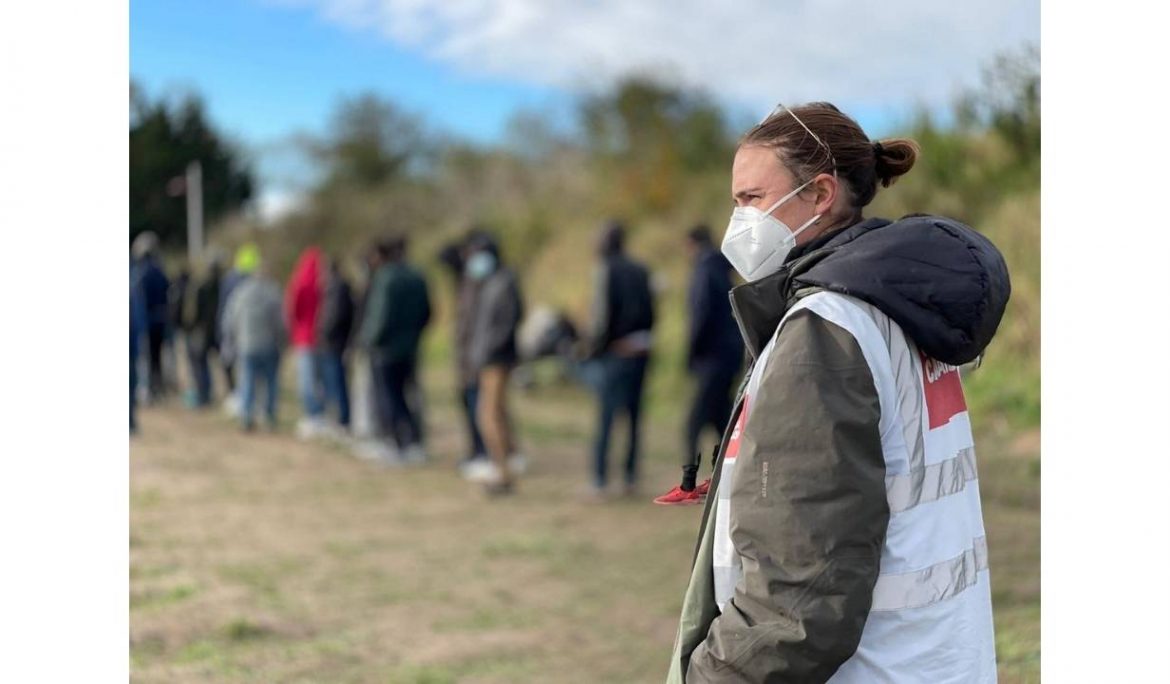 A volunteer’s job in Calais is to make tonight as good as it can be for the people abandoned there, and add some joy and comfort to a harsh day. But sometimes something suddenly happens – maybe just a short, heartbreaking moment – to make you stop and remember the reality of their lives.
That happened to me one day. I was helping at a distribution at the Old Lidl site in Calais, where we’d been giving out tents and blankets.
Old Lidl is striking because you can see the lorries in the parking area from where the tents are. It’s a stark reminder of why the refugees are there. I was at the hairdressing station with some guys chatting and having a laugh over a cup of tea, when they started joking about how hard it was to get on the lorries, and how they’d be trying to get on one that night.
Then one young guy, Ahmed, just said, “Yeah, you know last week my friend was trying to get on a lorry. But he was killed as he climbed on.”
It was a horrific thing to hear out of the blue, but that’s the reality people face here, and it can be easy to forget. It shocked me to think that any of the guys could be killed that night. And it made me realise how precarious their lives are.
I had another similar experience too. The refugees were so sociable and friendly, and I was chatting with a guy called Khalid about DJ Khalid when he casually mentioned spending four days in a boat on the Mediterranean Sea. “The engine stopped,” he said. “ I didn’t think I would make it.”
This is normal conversation in Calais.
I remember that even though everyone was so friendly, there was a police van sitting there watching. A threat looking over us. Huge men clad in black riot gear watching a camp of young, unarmed Eritreans who were doing no one any harm at all. In fact there were breast feeding mothers in the camp just looking after their children the best they could.
There were also moments when I was moved by the positivity and strength. Helping with the hairdressing was my favourite activity, and I noticed how, in the middle of a field with no showers or hot water, the men took such care and pride in their appearance.
I loved watching the transformation, it was seamlessly beautiful work, sometimes done with a simple razor blade held in a comb or in the fingers of a friend. After the hair, nails and beards were trimmed and cleaned. The service is so appreciated. I found it really striking that a man with nowhere to sleep that night felt his appearance mattered.
Volunteering with Care4Calais is easy. Everything was beautifully put together, everything runs smoothly. It was great working with the other volunteers, so many nationalities and people from all walks of life. But everyone had a ‘can do’ attitude, and a sense of humour so we worked so well as a team. It was also great to see the charity in touch with everyone else there in Calais and working together to make life better for the refugees.
I was knackered when I got back to Cornwall, where I live. It’s really hard work but very refreshing. Soon after I got back I went to see a play with my mum. It wasn’t an especially sad play but I found myself crying through the play. I think that was some of the emotion I’d suppressed while I was in Calais, finding a way out. I think it really hits you when you are on the ferry back.
At home I’m an artist, using paint and sculpture as the media of my work. I wanted to make art that gave some sort of meaning to what is going on in Calais. But once I was there, there was so much to take in that my ideas of creating art went out the window. I will have to think about it and let the ideas percolate now I’m back. The picture you can see here is a work in progress, based on people I saw when I was volunteering.
But I know I will go back to volunteer again.
To volunteer or donate go to Care4calais.org